Election Disputes: No Bibles, and Lots of Swearing 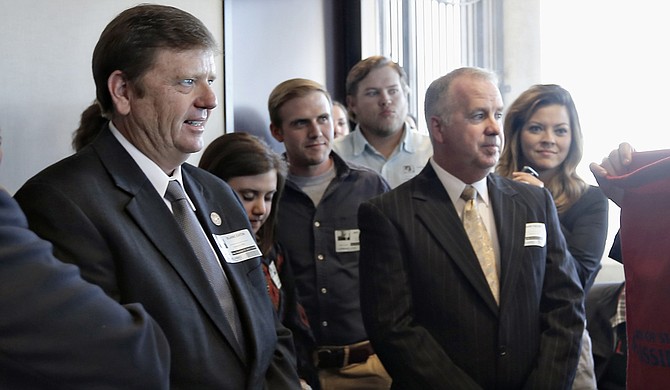 What Rep. Bo Eaton, D-Taylorsville (left), thought was a win in November by drawing a green straw has turned into a laborious court-like hearing after Republican challenger Mark Tullos (right) challenged the election results. Photo by Imani Khayyam.

The Mississippi Capitol became a temporary courthouse last week in a Republican battle for super-majority control of the House of Representatives. Staffers arranged long tables in a rectangle in Room 113 for the House special committee hearing in the District 79 election dispute. Then, instead of one judge at the front of the room, five representatives sat at a long table. Rep. Mark Baker, R-Brandon, the chairman of the committee and an attorney, sat in the middle. Rep. Linda Coleman, D-Mound Bayou, is the only Democrat on the otherwise Republican committee.

At 10 a.m. on Jan. 14, witnesses from the Smith County Election Commission came up to testify before the committee in what turned out to be an over-five-hour hearing dissecting exactly what happened between Nov. 3 and Nov. 10 to about 30 affidavit ballots in the Smith County election. Witnesses sat at a table directly in front of the committee.

Smith County Circuit Clerk Anthony Grayson was the first to take the "stand" and presented a plethora of subpoenaed documents to the committee. Grayson has been county clerk for 15 years. A blue, boxy carrier that looked like a cooler with the words "SMITH COUNTY" on the side took up most of the table Grayson sat at for over three hours, as he explained how affidavit ballots are counted and verified using the state's electronic voting system, poll books and even paper records to find voters.

The hearing played out like a make-believe trial. Witnesses swore to tell the truth, but there was no Bible in sight. Grayson approached the committee's table several times to deliver documents and take back unimportant ones. The first row of viewer seats was reserved for legislators, mainly occupied by Republicans with some Democrats on the end. The lengthy hearing eventually emptied the room out, and Room 113 was almost barren by 5 p.m. when the committee finally adjourned for the night.

The committee is tasked with resolving the disputed election contest now famous for its November straw-drawing tiebreaker to choose a winner.

Rep. Bo Eaton, D-Taylorsville, who has represented District 79 since 1996, won the tiebreaker by drawing straws in November as state law instructs. But his challenger, Mark Tullos, disputed that the election was a tie in the first place due to what he calls a secret meeting of the election commission when its members counted nine affidavit ballots that led to a tie in the first place. Tullos also says five of those ballots should not be counted due to a violation of a rule in state law that allows voters who move within 30 days prior to the election to vote by affidavit ballot.

The extensive questioning and tension in the frigid committee room on the first floor of the Capitol building were likely due to what is at stake.

Of course, the election committee is supposed to judge the dispute based on its congruence or incongruence with election law, but as the hearings on Thursday proved, retrospect is tricky in election season.

Election officials from Smith County testified that about 30 affidavit ballots were collected and investigated in the days immediately following the Nov. 3 election. The election commission met Nov. 9 to count affidavit ballots, and by Nov. 10, they declared the race a tie after finding nine of those affidavit ballots to be legitimate.

Coleman reminded the committee that they have the benefit of hindsight and documentation in this case and that evaluating the work that the election commissioners did in the time they had is important.

"These people did the best possible job they could do," Coleman said. "They were really not required to do all of this cross-referencing, and prior to this hearing may have not thought about that as an extra measure they were taking for counting these ballots."

Baker agreed, save one affidavit ballot the committee found that seemed to match the criteria of another ballot that was counted. The ballot in question was not counted because the election-committee members were unable to locate the changed last name of the woman who submitted the ballot in poll books or the state's electronic management system.

"This (ballot) causes me some problems," Baker said at Thursday's hearings.

By the end of Thursday's hearing, the committee seemed to have turned to the question of counting and opening a 10th ballot. Both Eaton and Tullos' lawyers said the vote should not be opened, counted or considered. Eaton said he believes the committee will look at all the facts, as they are presented accurately, and make the decision accordingly.

"I have all the confidence in the world in the House of Representatives to do what's right," he told the Jackson Free Press on Jan. 14.

How Disputed Elections Can Go

Edward Foley, an Ohio State University professor and author of the recent book "Ballot Battles: The History of Disputed Elections in the United States," said election disputes can get a little crazy—particularly at a state level. Foley said when the Legislature is resolving an election contest, the first question you have to ask is, "Are they resolving the dispute on merit or letting partisan politics take over?"

In Foley's research for his book, he found many examples of states handling election disputes with partisanship. That is, if a Democrat was challenging a Republican who won the election, but the Legislature was predominantly Democratic, that Democrat would likely win the dispute. While Foley has not followed the Mississippi election disputes closely, he said which candidate is asking for help and who controls the Legislature are both important to think about when discussing contested elections.

On the other side, however, Foley points to cases—he found one in Michigan and one in Washington state—where local election officials did make mistakes and ballots weren't counted that should have been, or the opposite. State law can clash with voter rights, he said.

Some states solve disputed election contests with their judiciary branches. Minnesota, for example, appoints a tri-partisan panel of judges with one Democrat, one Republican and one independent (a viable party in Minnesota) to preside over disputes. The goal of the panel was to make disputes as "fair as humanly possible," Foley said.

While Minnesota's way to resolve election disputes seems revolutionary, it is not the norm. Foley said state Legislatures are the "most resistant to move things to the court" to resolve disputes.

"The Legislature says, 'hey, we want to control the process when it's one of our seats,'" Foley said. "There has been some movement to rely on courts in the state Legislature context ... but the (state) legislative races are kind of the last on the bandwagon."

The House special election committee will meet again this week to consider recommendations for the house. They had not met again publicly by press time. If one of those recommendations is to open the 10th ballot, one woman's vote could determine the entire outcome of District 79's representation for the next four years. Her name is Dawn Gorey, and according to AP reports, she does not remember how she voted in the District 79 race.

In Gorey's case, the entire public may soon know how she voted if the committee decides to count and open her ballot. Foley said, in some historic instances, courts have granted voters the right to decide whether or not his or her vote is counted or made public. But it's too late for Gorey, whose vote cannot be recalled.

On the other side of the Capitol, the Senate confirmed the special election committee's recommendation to seat Bob Dearing, D-Natchez, on Monday, Jan. 18. Dearing beat former District 37 seatholder Melanie Sojourner by 64 votes, but she challenged the election, claiming misconduct..