After Getting the Short Straw, Tullos Appeals Loss to the Miss. House 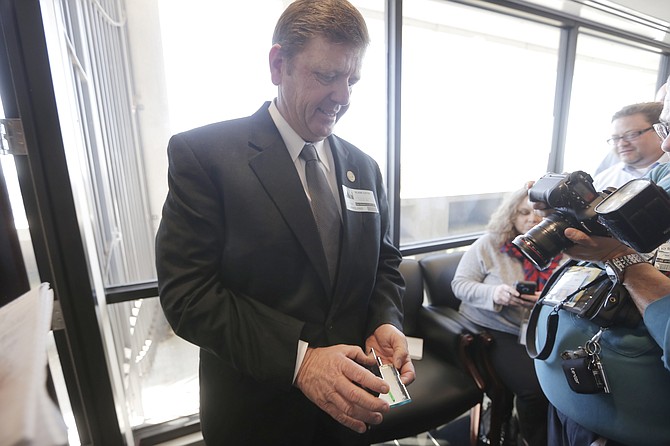 JACKSON, Miss. (AP) — Even after two Mississippi legislative candidates drew straws to break a tied election, the state House of Representatives will have final say over who will serve the next four years.

Democratic Rep. Bo Eaton, a 20-year incumbent from Taylorsville, drew a long green straw on Friday in a tiebreaking ceremony overseen by the governor and secretary of state. That made him the winner over Republican Mark Tullos of Raleigh, who drew a short red straw.

However, a day before the ceremony took place, Tullos filed a petition asking the House to seat him as the representative for District 79 in Smith and Jasper counties, based on questions about how votes were counted. House Speaker Philip Gunn, R-Clinton, is expected to appoint a committee to consider the challenge after the legislative session begins in early January.

If Tullos eventually wins, Republicans will hold a three-fifths supermajority.

"They determined to accept as valid certain ballots that had previously been rejected. They did so without acting 'in fair and full view of the voting public' and without recognizing the right of candidates 'to reasonably view and inspect the ballots ... and the other documents used in the said election,'" he said, quoting a state law.

He said the election commission met in public Nov. 10 to count the final votes in the race. Three came from people who had voted by affidavit because they forgot to present photo identification on election day but they later returned to show IDs, which allowed the ballots to count. Nine ballots had been rejected Nov. 3 but were discussed Nov. 9 and counted Nov. 10. Tullos said after the race was certified as a tie that the votes had come from people who live in District 79 but had moved from one precinct to another.

Certified results show Eaton and Tullos each received 4,589 votes in the Nov. 3 general election. State law requires a tied election to be decided by lot.

Eaton's attorney, Ricky Ruffin, said in a phone interview Monday that he had not read Tullos' petition. Ruffin said he and Eaton also were not given notice about the Nov. 9 meeting, but he thinks election commission members can meet as they did.

Smith County Circuit Clerk Anthony Grayson said in a separate interview Monday that election commissioners met in private Nov. 9 to discuss personal information such as birthdates and addresses of the voters who cast the nine affidavit ballots — the kind of information he said would not usually be discussed at a public meeting.

Eaton, asked Monday if he thinks he will be treated fairly by the House, said: "I think they will be bound by facts that they'll be fair with me. I've always been fair with the membership."

Wallace often represents Republicans. Earlier this year, he was paid more than $60,000 to represent the House speaker and other legislative leaders in a dispute over the wording of an education funding ballot initiative.