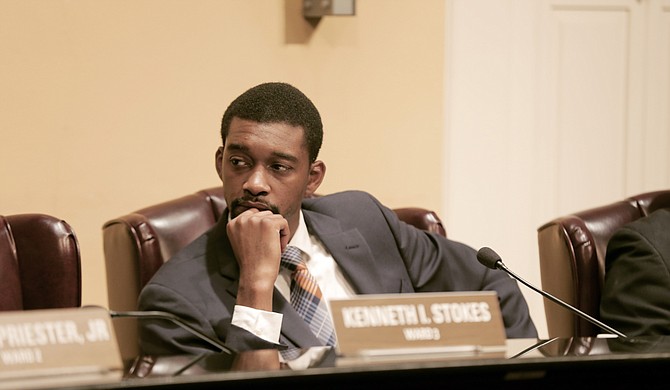 Jackson City Council President Tyrone Hendrix said the results of a settlement in the sexual-harassment lawsuit against Mayor Tony Yarber would be public if and when an agreement is reached. Photo by Imani Khayyam.

The possibility of a settlement in the sexual-harassment and discrimination lawsuit a former executive assistant to Mayor Tony Yarber filed popped up for a moment in the last regular Jackson City Council meeting before President Tyrone Hendrix pulled it from the agenda with no explanation.

Ward 4 Councilman De'Keither Stamps asked Hendrix during the meeting why he wanted to pull it, and Hendrix declined to give an explanation.

Hendrix told the Jackson Free Press today that he could not comment on the case because it is in current litigation, a common line from municipal officials who do not want to inadvertently affect the outcome of a lawsuit through their comments in the press.

However, Hendrix did commit to release the details of the settlement in accordance with state law.

"We are not going to change what we have been doing for this particular item from what we have done in the past," Hendrix said. "This one has a brighter light shined on it because of what's happened, but at the end of the day, this council and this city, especially since I have been here, has been focused on transparency, especially when it comes to public funds. And we are not going to deviate from that."

Kimberly Bracey, through local attorney Nick Norris of Watson and Norris, alleged in her complaint that Tony Yarber, in his capacity as the mayor of Jackson, hired her as his executive assistant in 2014 during a time when she was estranged from her husband. She and the mayor then began a sexual relationship that continued for months, Bracey claimed, adding that later that year, Bracey cut off the relationship, mending her marriage. The complaint states that the mayor transferred her to another supervisor as well.

However, Bracey alleges that Yarber forced her to continue their relationship, "by making it clear that she could be terminated if she did not have sex with him," also alleging that he encouraged her to convince another woman to perform oral sex on the mayor in exchange for employment. In 2015, the complaint states, Bracey began to refuse the mayor's advances and was shortly thereafter let go in April 2015, supposedly for using city equipment to print flyers for her husband's unsuccessful run for Hinds County tax collector.

Bracey described parties she was forced to attend as a part of her duties with the mayor and members of the city administration staff, allegedly organized by Democratic operative Mitzi Bickers, in New Orleans and Atlanta. At some of these events, the complaint states, Bickers provided strippers with painted bodies and arranged sexual liaisons for the mayor.

Yarber responded to the complaint initially by referring to it as "vicious and scandalous."

Bracey's attorney did not return phone calls by press time.

Bracey also indicated that City Attorney Monica Joiner was in a sexual relationship with Yarber during the same time. This allegation created a conflict of interest for Joiner, who could then not participate in the proceedings on behalf of the City. The City hired the firm of Phelps Dunbar.

In a trial, the details of the discovery process, including potentially personal details about the mayor, the city attorney and others involved in the day-to-day administration of the City of Jackson are a part of the public record. If the case is settled out of court, the public will not know the veracity of Bracey's claims, even as it pays a large sum from the city's coffers. Changes to the internal policies or practices of the mayor's office or City as a whole also may not be made public.

Another settlement, with Demetrius Thomas for a little over $4,000 for a personal-injury lawsuit, was included in the agenda packet with all relevant information, including the amount. The council approved the Thomas settlement during the meeting.

Mississippi Attorney General Jim Hood's office stated earlier this year after the settlement agreement in the sexual-harassment case against former Mississippi Bureau of Narcotics Deputy Director Mike Perkins that public entities have to release details to the public in accordance with the Public Records Act.