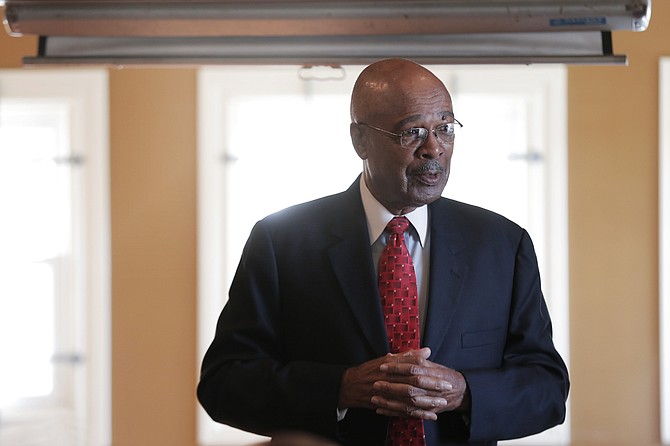 Dr. Rod Paige, former U.S. Secretary of Education, will serve as interim president of Jackson State University until July of next year. Photo by Imani Khayyam.

JACKSON — Dr. Rod Paige, the former U.S. secretary of education under President George W. Bush, believes Jackson State University can and must get past its recent financial controversies and have a bright future. But there is work to be done, the Monticello, Miss., native said at the Friday Forum at Koinonia Coffeehouse in Jackson this morning.

Paige, the interim president of JSU and a former football coach there, says the goal is to have a permanent replacement for Dr. Carolyn Meyers, who stepped down in October amid budget controversies, by July 1, 2017. But the public image of the university will determine the quality of president it attracts, he told the audience.

"That's why it's so important that we put this little issue to bed and come out looking good so we can attract a great president and new faculty," Paige said. "We fix the image, and make sure all the uncelebrated things going on there get celebrated."

In response to a JSU senior about what students could do in order to help the university, Paige told her the priority must be helping succeed. He encouraged student cooperation, saying they were an "integral part of the solution" to JSU's issues.

Paige also responded to a question about what national help he could bring to JSU by name-dropping Betsy DeVos, Donald Trump's choice for secretary of education and a strong proponent of charter schools and "school choice."

"I can't say we're beer buddies, but I've been on several panels with her. I have a really strong vision that she's a high-quality person," Paige said of DeVos.

"I do have and will have contacts in the U.S. Department of Education, and to that extent that I can I will try to use those contacts for the betterment of the university."

Paige, who headed the Department of Education during the Bush administration's implementation of the ill-fated "No Child Left Behind" law, also spoke about JSU's relationship with the surrounding Jackson Public Schools district, which serves 28,000 mostly black and Latino students.

"I have a deep interest in that because of my experience as a superintendent in (Houston, Texas). Nothing compares to being superintendent of a school district. We intend to have some conversations with (JPS), but we've not done that yet, as our primary focus has been on (JSU's) financial situation. But we should focus on (JPS) because they bring students to us," he said.

Paige's support of "school choice," however, is at odds with leadership in the surrounding public-school district, which has been very critical of charters. In Houston, Paige worked with KIPP prior to its establishment as a major charter-school system while he served as superintendent of its public-school district in the mid 1990s. He serves as chairman of the Texas Charter Schools Association, and for his efforts, the National Alliance for Public Charter Schools inducted him into its Hall of Fame in 2016.

Still, Paige said, he hopes to build a strong relationship with JPS, whose students "should be the primary feeder" the city's public historically black college. "Our ability to help students grow depends a good deal on the quality of education they get from JPS," he said.

The Jackson Free Press asked Paige about weighted student funding, a school-funding method championed by New Jersey-based education consulting firm EdBuild. State GOP leadership has contracted with EdBuild amid secretive circumstances in order to vet the state's current funding formula, the Mississippi Adequate Education Program, or MAEP. On the subject of weighted student funding, Paige said it has always been his opinion that the money should "follow the student." With weighted student funding, schools receive a base amount of money for each student and additional money for students with extra needs, like whether they are impoverished or learning English.

Sierra Mannie is an education reporting fellow at the Jackson Free Press and The Hechinger Report. Email [email protected].