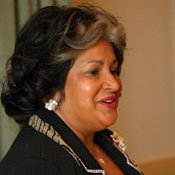 Carolyn Meyers is poised to become JSU's next president.

The board of trustees for Mississippi's universities announced Nov. 22 that it had selected Carolyn W. Meyers to serves as the next president of Jackson State University. Meyers is the former president of another historically black institution, Norfolk State University in Norfolk, Va., and would the first female JSU president.

During her four-year tenure at Norfolk State, the school's freshmen enrollment increased 19 percent in one year. The university opened an honors college, additional degree programs, and a school of graduate and professional studies.

Before coming to Norfolk State, Meyers served as a professor, provost and vice chancellor for academic affairs at North Carolina Agricultural and Technical State University in Greensboro, N.C.

She took the Norfolk State job in 2006 and served until June 2010, when she resigned after four years of a five-year contract. In November 2009, she was a finalist for the president's position at Morgan State University in Baltimore, Md. The Norfolk Virginian-Pilot reported that she submitted her resignation to Norfolk State that same month with the understanding that it would not be publicized until 2010.

The Virginian-Pilot also reported that Meyers' relationship with the university's board had grown increasingly tense in the fall of 2009. An internal audit found that the university had granted admission to "a significant number" of under-qualified students, the paper reported.

Meyers will visit JSU's Student Center on Dec. 1 for listening sessions with various campus constituency groups. Immediately following those meetings, the state college board will convene a meeting for a final vote on Meyers' appointment.