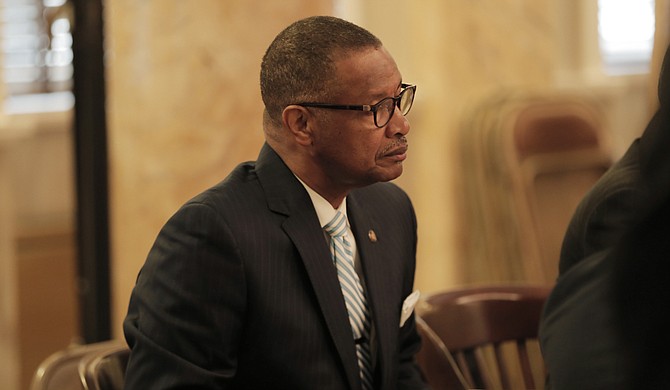 Sen. Sollie Norwood, D-Jackson, serves as one of the chairmen of the Black Legislative Caucus. Photo by Imani Khayyam.

Speaking to at a public hearing on education to members of Mississippi’s Legislative Black Caucus and House and Senate Democrats, Miller said the size of JPS in addition to continued underfunding has inhibited the success of the district. Compounding the problem, charter schools billed JPS $565,000 at the beginning of the school year, and the district had to pay with its local contributions.

“We have a number of students who are specifically in home schools or private schools, but we’ve never had to support them in that way,” she said. “The new law requires us now that for every child who goes to a charter school who lives in Jackson, we have to send a certain amount of dollars to fund charter schools.”

Education stakeholders from all over the state attended the hearing to air their particular concerns. Kelly Riley, executive director of Mississippi Professional Educators, said that for her organization, funding of the Mississippi Adequate Education Program is the most important policy issue. Riley said that legislators should not rewrite the funding formula in conference without the general public knowing, addressing rumors regarding the so-far unresolved status of HB 458, which would allow for changes to the MAEP formula.

“Any proposed changes to the formula should be fully vetted by our schools,” Riley said.

Speakers from rural areas in Mississippi also spoke to the impact of funding on their educational experience. Two girls attending Yazoo City High School in the Yazoo County School District spoke before the Caucuses talked about how more funding would affect them directly.

“I have a teacher that teaches science and English,” one student said. “We need more teachers so they can focus on teaching us one subject.”

“My school does not have any textbooks. Well, we have a class set, but not enough for us to take home. For every student, we barely have any computers, and there is no high-speed Internet, and we do not have any science labs,” her classmate added.

The girls say they visited Clinton High School as part of a leadership program with their school, and found the difference between Clinton and their school shocking. The girls say that the A-level school located in Hinds County has multiple working science labs and a modern gymnasium. No rats, no roaches, no outdated bleachers from the 1990s like their own school had—and with classes she had never even heard about, the girl said.

“What’s different about them that we don’t deserve the same quality they do?” she asked.

Rep. Rufus Straughter, D-Belzoni, challenged the Legislature’s majority party to give public education what it needs, saying that Mississippi Republicans have a duty not just to the Republican Party, but to the state of Mississippi. He said Mississippi Democrats can’t afford fatigue, and that they have to be there for the citizens they serve.

“It is a task dear to my heart. We can’t afford not to do anything just because we are not in control,” he said.

Sierra Mannie is an education reporting fellow for the Jackson Free Press and The Hechinger Report. Email her at [email protected] Visit jfp.ms/education.