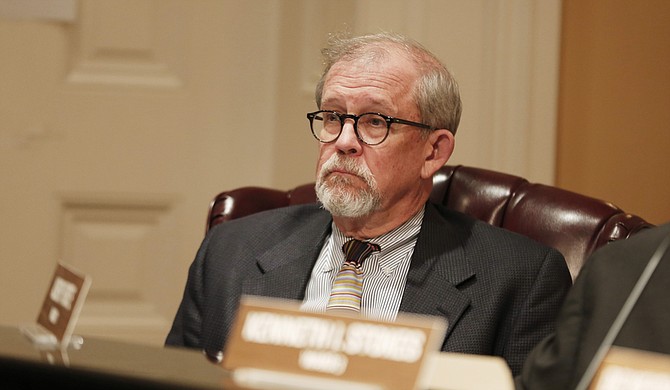 Ward 1 Councilman Ashby Foote voted against the Trilogy corrosion-control contract, saying he preferred hiring an in-house engineer to do the work. Photo by Imani Khayyam.

JACKSON — The City of Jackson is moving ahead with an "aggressive" effort to prevent leaching of lead into the municipal water supply.

The Jackson City Council approved a lower-cost corrosion-control contract with Trilogy Engineering late Tuesday night, moving the City to the next step of the state-mandated compliance plan. The council had previously rejected the plan, saying its $400,000 price tag was too high.

"We now have a proposal that is within high-end but is in a comparable range," Council President Melvin Priester Jr. said at the meeting. "We very clearly expressed very valid concerns during a prior meeting, but I think we have a compromise that allows us to move forward, and that is why I will be voting for this item at this time."

"Again," the letter from MSDH states, "it is paramount that activities leading to further optimization of the surface water system are conducted in compliance with or ahead of this modified Compliance Plan for the benefit of the customers of the City of Jackson water system."

The letter says that "it appears that water in the surface water system remains aggressive," thus it is likely that it will leach lead. "Additional efforts must be taken to optimize system water through increased pH and alkalinity levels."

Phillip Gibson, part owner of Trilogy and the lead engineer for the corrosion-control study, said during the council's Monday-night work session that creating the plan would take a couple of weeks and that it would take the state about the same time to approve it. After the Tuesday-night approval of the contract with his firm, Gibson told the Jackson Free Press in the City Hall lobby that work would start the next day.

Altogether, the cost of the contract between Trilogy and the City for the study and plan is now $291,969, lower than the original maximum cost of $400,000 that the City administration first presented to the council. The contract involves a total of four firms, with Trilogy earning $91,240 of the total amount.

Ward 1 Councilman Ashby Foote asked about "what is overhead and payroll burden" and why Trilogy was charging the City $91,240.

Public Works Director Kishia Powell answered that it was a standard method in professional-services contracts.

To Foote, it seemed as if the City was paying twice for the services of Gibson and Trilogy, instead of just paying an engineer.

"It's being proposed that Trilogy Engineering be hired, and they have Mr. Gibson who is the employee, is the engineer," Foote said. "He and Mrs. Thesselonian LeBlanc are the owners of the firm is my understanding. And so we are paying the consulting firm and the firm, I guess, is paying him to do the work of $91,240, but because it is a consulting firm we have to double the pay?"

"It's the same breakdown that we use for the construct of costs for professional-services contracts," Powell said.

Foote said that he did not like the cost burden, preferring to hire an in-house engineer for the city. "I think we are paying too much, and I think we should have a professional within the city government."

Priester referenced an April 4 letter from MSDH Director of Public Health Jim Craig that gave examples of similar contracts from cities of comparable size to Jackson. It pointed to a "small surface public water supply in Maine" that had asked for proposals for a corrosion-control study. "Assuming the costs are proportional, a system the size of Jackson could expect costs of $93,000 to $319,100," the letter states.

The Council approved the contract with Trilogy Engineering for $291,969 on a vote of 3-2. Ward 6 Councilmen Hendrix, Priester and Ward 4 Councilman De'Keither Stamps voted for the contract, while Foote and Ward 3 Councilman Kenneth Stokes voted against. Ward 7 Councilwoman Margaret Barrett-Simon and Ward 5 Councilman Charles Tillman had both left the meeting earlier.