Sharon Brown: A Woman on a Mission to Change the State Flag 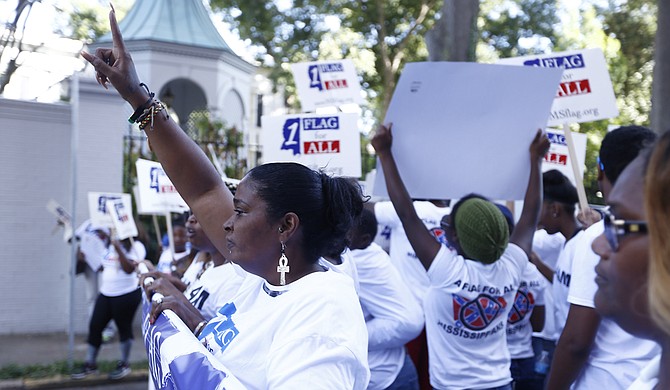 Sharon Brown is a longtime resident of Jackson, who recently filed an initiative to remove the Confederate battle flag and any other symbols of the Confederacy from the Mississippi state flag permanently. Photo by Imani Khayyam.

Sharon Brown isn't waiting for the Legislature to start the process to change the Mississippi flag.

Brown has submitted ballot Initiative 55 with the offices of the state attorney general and the secretary of state to remove the Confederate battle emblem from Mississippi's state flag. State officials validated the initiative language on Friday, Oct. 9.

Now, Brown is tasked with gathering more than 107,000 certified signatures in the next year to get it on the 2018 ballot.

Brown was born and raised in Jackson by her mother, Flora, and grew up with her sister, Valerie. The Browns, who are African American, recently started an ongoing conversation with their mother about their past and the state flag. Flora was also raised in Mississippi, and fought for national welfare reform in the 1960s and even went to jail for her activism.

The spirit of advocacy and activism lives on in the family. Brown said her mother told her at a young age what the Confederate battle emblem in the state flag stood for and the main reason that Mississippi seceded in the first place—slavery.

One recent night across the table Flora told her daughters, "You girls better stand up and do something."

Chokwe Antar Lumumba, Republican South Carolina state Rep. Jenny Horne, Myrlie Evers-Williams, David Banner and Sharon Brown (from left to right) were the featured speakers at the One Flag for All Rally on Oct. 11.

Brown said her mother's challenge led her to file ballot initiative 55 to remove the Confederate battle flag and any symbols of the Confederacy from the Mississippi state flag. Valerie is also helping with the initiative.

"We need a flag that shows unity and peace and love," Sharon said. "And we shouldn't be an outlier to the other states."

Currently, ballot Initiative 54 is under way proposing an amendment to Mississippi's constitution to make the current flag, adopted in 1894, the permanent state flag.

Brown, 43, said she considers herself a "helper bee" in the Jackson community. She is working as an independent-advocacy consultant, most recently consulting with HIV/AIDS organizations. Brown has always lived in Mississippi, mostly in Jackson. She said she hands out lunches to homeless people in Poindexter Park in west Jackson, and she donates school supplies to local schools.

"Until you can understand why things are the way they are, it's hard to find solutions to those problems (in society)," Brown said. "You don't need a degree to figure that out, you just need a passion for the people you live with and the people in (your) state."

Brown is partially through a bachelor's degree program in criminal justice at Jackson State University. She plans to continue going to classes next year and also add a political-science degree to her studies. She said that reading and wanting to make a difference has brought her this far.

"You have to have the thirst for knowledge and learning and wanting to make where you live a better place," she said.

Brown helped coordinate the 1 Flag for All rally that marched from Lynch Street to downtown Jackson on Oct. 11, inviting civil-rights advocates, community leaders, pastors and politicians. More than 400 people came out for the rally.

The event drew participants from throughout Mississippi, including celebrities like Mississippi natives hip-hop artist and actor David Banner and civil-rights activist Myrlie Evers-Williams.

Banner and Evers-Williams pointed to the legacy of slavery as the main reason to bring down the state flag. Evers-Williams mentioned Confederate Gen. Robert E. Lee who would not even attend Civil War commemorations and distanced himself from Confederate symbols.

"If a former Confederate general recognizes the divisiveness of a symbol of disunity, we must do so, also," Evers-Williams said at the rally.

Banner said Mississippi is not fully recognizing its troubled history by flying a state flag with the Confederate emblem—which he sees as an insult.

"What was the Civil War fought over?" Banner said. "Be honest—slavery."

Out-of-state guests included South Carolina state Rep. Jenny Horne, a white Republican who made waves in July when she pushed the South Carolina House of Representatives to take the flag down from the capitol grounds immediately rather than go through the constitutional amendment process.

"I have heard enough about heritage. I have a heritage—I am a lifelong South Carolinian, OK?" Horne said on the South Carolina House floor. "I am a descendant of (Confederacy President) Jefferson Davis, but that does not matter. It's not about Jenny Horne, it's about the people of South Carolina who have demanded that this symbol of hate come off of the statehouse grounds."

Brown said she started calling friends and family a month in advance of the rally, as she prepared to submit her ballot initiative.

1 Flag for All March

The Rev. Clyde Tate of Jackson is in support of the Initiative and said he will help collect signatures.

"We are all made of one God and live of one accord: black, white, yellow, red, we are all one people," Tate said.

He believes that the majority opinion of Mississippians should determine what happens with the flag, and Tate said the flag is offending a lot more people than it is not.

"Change is good," Tate said. "At some point we have to change, and our flag should not represent a group but one nation under God."

Brown agrees. She said that while she respects the "heritage" argument, the flag should be a "more unified" representation of Mississippi and does not represent everyone in the state's heritage. Brown said the Confederate symbol on the flag hurts all Mississippians, including white people.

"It's hurting us socially and economically," she said.

Even if Brown's initiative gets more than 107,000 signatures, it would not go on a ballot until 2018. Brown hopes the state won't have to wait that long.

"In January, I have faith that our legislators are going to do what is right because the world is watching now," she said. "The rally we did on Sunday was covered by (about) 30 different media outlets."

In the meantime, Brown is taking a little time to rest before she starts planning for another rally at some point in the next few months. She said she cannot stop the work she's started.

"I cannot stop because for me to stop would be a disappointment to my mom," Brown said.

"I would never do that because she didn't stop, and she didn't give up."

Read more flag stories at jfp.ms/slavery and a gallery of this rally at jfp.ms/oneflag. See new flag designs at #msflagdiy on Instagram.