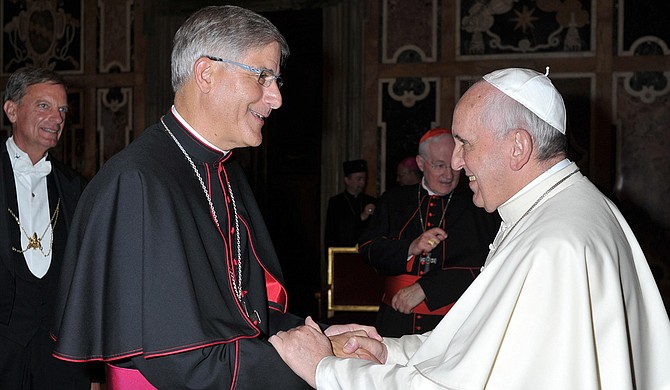 Habitat for Humanity Mississippi Capital Area has built almost 600 houses for low-income families in need over the last 29 years. The Catholic Diocese of Jackson has partnered with the organization for 30 of those projects so far. Bishop Joseph Kopacz, head of the Jackson Diocese, is leading a special build called Pope House that honors Pope Francis for his commitment to social justice and helping the poor.

About two months ago, an anonymous donor contacted HFHMCA and offered to donate $40,000 to the construction of a new home on the condition that the project honor Francis and that the Jackson community raise a matching amount of donations to the anonymous contribution.

"I hope the people of Jackson will rise to meet the donation, as this is an excellent opportunity for people to come together as a community and support something of great value in giving a Jackson family a good home," Kopacz said.

Kopacz, 65, transferred to the Jackson Diocese from his hometown of Scranton, Penn., in February 2014. In Scranton, he attended Dunmore Central Catholic High School, now called Holy Cross High School, before going on to the University of Scranton in 1968. Kopacz majored in history and philosophy and graduated with bachelor's degrees in both in 1972. He later earned a master's degree in theology from Christ the King Seminary in East Aurora, N.Y., where he studied from 1972 to 1977. After finishing seminary, which he describes as being "like graduate or law school for priests," Kopacz was ordained.

While still serving as a pastor, Kopacz decided to continue his education. In 1995, he earned a master's degree in counseling psychology, and in 2000, he earned a doctorate degree in human development, both from Marywood University in Scranton.

In 1998, the Scranton Diocese named Kopacz vicar of priests, which he describes as a "personnel director for priests." In that capacity, he helped newly ordained priests get settled and helped pastors for new parishes set up their churches. He also taught theology at both the Scranton seminary and the Saint Pious X Seminary in Balton, Penn. While serving as vicar, Kopacz was also the pastor at Sacred Heart Church in Scranton from 2002 to 2005 and the pastor at Saint Mary's Church in Pocono, Penn., from 2006 to 2014.

Then, in early 2014, Archbishop Carlo Maria Vigano, the Apostolic Delegate for the United States—an ambassador of the Vatican who oversees bishops on behalf of the Pope—informed Kopacz that the Pope chose him to replace Jackson's previous bishop, Joseph Latino, who was retiring at age 75.

"Vigano and other advisers that look after the diocese around their country try to match who they feel would have the necessary experience to serve in a particular area," Kopacz said. "Pope Francis values pastoring in many different communities in a bishop, so that was a large factor in my being chosen for Jackson. The Jackson Diocese is large and in need of a bishop who can make regular visits to all the areas like a pastor in a parish would. The staff here in the Jackson Diocese does lots of travelling. Jackson is also very informal compared to up north. There's less formal dinners and more potluck suppers down here, and I think I'm well suited for that kind of thing."

As bishop of the Jackson Diocese, Kopacz' job involves continuing to develop and strengthen the relationship between the diocese and Habitat for Humanity by overseeing the annual build the diocese sponsors, normally called the Catholic Build. Last year's Catholic Build was successful, and Kopacz hopes that the Pope House build means the diocese will be able to support the construction of two homes this year.

"From what I've seen since I started supervising this project, I'm impressed at the level of commitment the parish has shown for nearly 30 years so far and continues to show now," Kopacz said. "Talking with pastors and people involved in this and seeing the homes, watching the dedication and blessing of the home, it makes me happy to be part of a project that brings such a blessing to these families and their neighborhoods. I hope this helps revitalize the city and the surrounding area one home at a time."