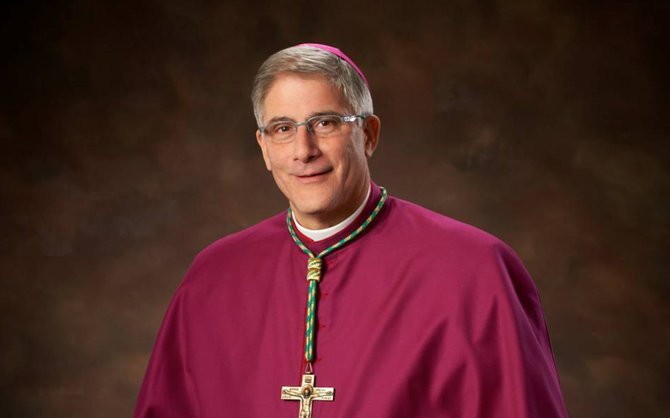 On hand to show support for the Migrant Support Center was the new bishop of the Jackson Diocese, Joseph Kopacz, installed Feb. 6. Kopacz hails from Scranton, Penn.

Fellowship and good food trumped the torrential downpour last night for about 100 Jackson area residents who came out to show their support for a good cause.

Catholic Charities established the Migrant Support Center 12 years ago to assist, educate and advocate for immigrants in Mississippi, said Teresita Turner, who is originally from Mexico City. Turner and Blanca Love staff the center's Immigration Clinic.

"We help people who have a legal remedy here," Turner said, emphasizing that the center focuses on documented immigrants and citizens who, like herself, hail from foreign countries. Among the important services the center offers are help with the naturalization and citizenship process, visa issues, and language interpretation and translations. Beyond immigration issues, though, it also helps individuals and families with problems common to many United States citizens, such as domestic violence and human trafficking, helping them to navigate through the reporting and judicial processes.

Love told of a case where the center is assisting an immigrant man, who was a victim of domestic violence.

"He happened to come to the right place, and we were able to assist him," she said. "It was a pretty tough situation, but we got him to a place where he feels safe now."

"As a citizen, if you are a victim of a crime ... and you don't report it, tomorrow it could happen to me," Turner said, pointing out that many immigrants are afraid to report crimes to the police because they fear repercussions because of their status and lack of language skills. "We encourage them to talk to the police," she said.

Turner also emphasized the importance for immigrants to acculturate in American society and for Mississippians to learn about the immigrants in their midst.

"Mississippi is still not too familiar with immigrants," she said, and people are often unaware how often they encounter others from other countries and cultures, including in ethnic eateries. On the other hand, people who want to become Americans should become familiar with how the American legal system works and learn English.

"If you're coming to this country, you have to respect the rules," Turner said. "This is basic. ... Be part of the society."

The center also provides information for businesses looking to hire immigrants, which can be an equally thorny process. "We're happy to do that," Turner said.

She added that while most of the center's clients are from Central and South America, patrons come from across the globe. "We have people from Africa, Nigeria, the Middle East, the Philippines, Afghanistan, Yemen and Europe," Turner said. The center also works with other Catholic Charities' programs that assist refugees, and provide shelter and therapy, and provides references for other outside services when necessary.

On hand to show support for the Migrant Support Center was the new bishop of the Jackson Diocese, Joseph Kopacz, installed Feb. 6. Kopacz hails from Scranton, Penn.

"What surprises me most (about Mississippi)? Eighty degrees in February!" he said with a smile. What really surprises Kopacz, happily, is the amount of social justice advocacy the leaders of the diocese take on and its rich history reaching back to the Civil Rights Movement. "That really is impressive," he said.

Southern hospitality is quickly making Kopacz feel right at home, he said. "The warmth of the people, maybe not surprising, it's such a nice experience," he said.

"Catholic Charities is closely aligned with the diocese," Kopacz added. "We're walking with them. ... The social needs are just enormous."