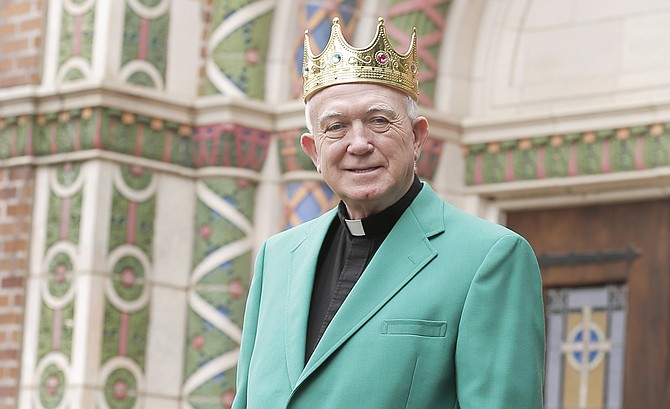 Brothers Hal and Malcolm White created the Mal's St. Paddy's Parade—one of the most popular annual events in Jackson—in 1983.

This year, in honor of Hal, who died after suffering an aneurysm in 2013 at age 64, Malcolm has changed the name of the 33rd annual parade to the Hal's St. Paddy's Parade. The theme of the 2016 parade is 'HAL-lelu-Y'all,' in keeping with remembering Hal, and he has selected Father Michael O'Brien, Hal's priest for many years, as the grand marshal for the event.

"Having known Hal for over a decade, being around him both in church and in schools he worked with, I always saw him as a fun and nice guy with a lot of friends, who loved golf and had a great family," O'Brien says. "When Malcolm contacted me back in February about being grand marshal for the parade this year, I was surprised but honored, and I wanted to do whatever I could to help recognize and remember Hal. I feel this event is going to be a celebration of Hal and all that he did for Jackson."

O'Brien, who is 67 and a resident of Canton, was born and raised in Roscommon, Ireland. He first went into ministry 43 years ago when he enrolled at St. Patrick's Seminary in Carlow, Ireland. He graduated from the seminary six years later and moved to the U.S. after volunteering to work as an associate pastor at St. Mary's Catholic Church in Jackson when he was 24.

"I heard that the bishop in Mississippi was looking for priests, so I volunteered to come to Jackson," O'Brien says. "I went into the ministry in the first place because I wanted to help people and serve God by doing so, and I thought Mississippi was the place for me to do that."

O'Brien was appointed as youth director for the Catholic Diocese of Jackson around 1975. In 1982, he went on a one-year sabbatical to Fordham University in New York City, after which he served as the priest for St. Joseph Catholic Church in Starkville until 2001. He then served at Assumption Catholic Church in Natchez before he went to St. Richard.

The Hal's St. Paddy's Parade is Saturday, March 19, in downtown Jackson. For information on the event, visit halsstpaddysparade.com.