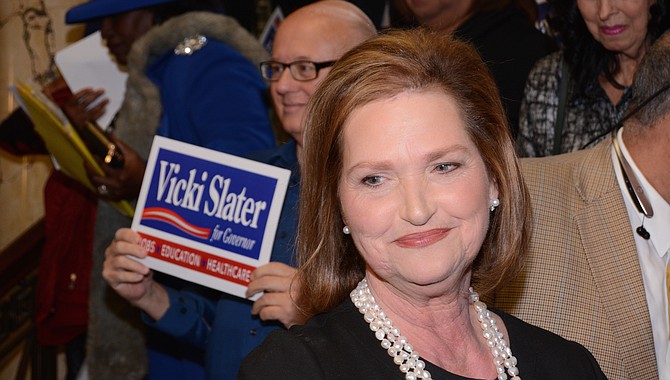 The Madison attorney has never held public office, but she spoke confidently beneath the Capitol dome and encouraged voters to support her goals to save "our beloved state of Mississippi from the forces that are wrecking it."

Slater denounced the current leadership for its failure in healthcare by refusing to expand Medicaid, in job creation by facilitating the loss of 40,000 jobs, and in education by not fully funding public schools.

She also told young voters that their parents had it better than they do now when it comes to education attainment and the opportunity to make a living wage after college.

"Back when Governor Bryant and I were in school, our teachers never had to dip into their pockets to help fund the classroom, and college was fully affordable. When folks got out of school, they could find jobs that supported a family," Slater said. "The government is funded with your tax dollars, too. There is nothing wrong with voting for better health, better wages, better education (and) better jobs for yourselves."

Slater told reporters that her campaign is ready and will have strong financing. Rickey Cole, chairman of the Democratic Party, said he believes Slater will be able to garner donations from first-time contributors.

Slater graduated from the University of Southern Mississippi in 1979 and received her law degree from Tulane University.

Rep. David Baria, D-Bay St. Louis, noted during his introduction of Slater that she is the first woman to run for governor since Evelyn Gandy, the first woman ever elected to statewide office in Mississippi. She served as the state treasurer from 1960 to 1964 and from 1968 to 1972, before becoming lieutenant governor from 1976 to 1980. William Winter and Bill Allain defeated Gandy's campaigns for governor in 1979 and 1983, respectively. If Slater is successful, she will be the first female governor of the state.

Former Sen. Gloria Williamson, who was in attendance, said the Slater's decision to run is exciting and that she could hardly remember the last time a woman ran for governor.

"Today is the day we proudly step forward and begin working together to get Mississippi back in the game and for all of us to win," Slater said.