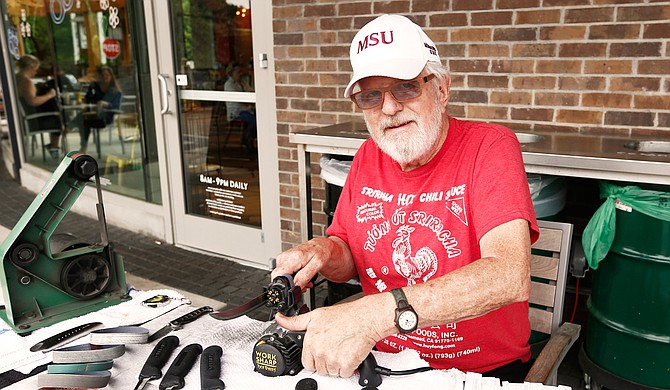 Jim Burwell, who owns Burwell Blades, has set up many Saturdays outside of Whole Foods Market to sharpen blades for people. Photo by Imani Khayyam.

My relationship with the kitchen is a somewhat complicated one. Growing up, I had a really close relationship with my grandfather, who was a bit of a gourmand. Thanks to him, my childhood included reading reams of cookbooks; flipping through stacks and stacks of Bon Appetit, Gourmet, and Food & Wine magazines; traveling to New Orleans to eat out; and watching Julia Child, "Yan Can Cook" and Justin Wilson back in the days before Food Network even existed.

Dee, as I called him, also felt the need to buy pretty much any and all cooking tools and accoutrements he could get his hands on, ordering from catalogs, hotel and restaurant supply stores, and, of course, Jackson's The Everyday Gourmet (1270 E. County Line Road, 601-977-9258).

Because of him, I've had a lifelong appreciation for cooking and the art and science of it. When I got my first apartment, one of the biggest desires I had in furnishing it was not actual furniture—my coffee table came from a dumpster dive—but, rather, a KitchenAid stand mixer. It didn't matter that I didn't actually cook; I wanted the equipment. And Dee got me one.

Years ago, he also gifted me with a block set of J.A. Henckels knives. Having that always made me feel like I was at least somewhat capable of preparing foodstuffs, should the need come up. But I never really used them.

Until recently, that is. Over the last year or so, I embarked upon an endeavor I came to call #AdventuresInBaking, in which I, generally on Sunday nights, attempted to conquer various baked-goods recipes. I'd bring the results to my office or drop them off at friends' doors and then send a text that said they'd been "cake-bombed." I grew more confident in my abilities and the wonder that baking can hold—seriously, there's something immensely gratifying and thoroughly fascinating about seeing cinnamon rolls rise thanks to the magic of yeast.

However, baking involves precision; measurements, timing ... all these things must be exact, or recipes can go disastrously awry. Cooking, by contrast, is (in my estimation) more loosey-goosey and improvisational. And that intimidated the heck out of me. But finally, I just decided to start  playing around.

I found recipes online. I used the ingredients I had and my library of knowledge from reading all those magazines and watching all the cooking shows and tweaked the recipes according to what I had available and my tastes. And, amazingly, now I'll just make a recipe up whole-cloth. It's like I'm channeling Dee. (I remember my mother following him around the kitchen as he combined ingredients, taking notes because there was no recipe, and she wanted to be able to recreate his dishes.)

As I did this, I realized something. Since I hadn't used them much, my poor Henckels had never been sharpened in all their years. A cook needs proper tools, so I needed to address this situation, and promptly. Luckily, social media answered my dilemma.

Jacksonian Jim Burwell sharpens things. His business, Burwell Blades, services knives, scissors, garden tools ... anything with a blade that can become dull, basically (find him on Facebook). For several Saturdays, he has set up outside Whole Foods Market (4500 Interstate 55 N., 601-608-0405) to offer his services.

I eagerly hauled my knives to him one weekend morning and dropped them off while I went inside to shop. By the time I checked out, my knives were ready. Without too much judgment, he did let me know that they'd needed rather a lot of attention, so next time I wouldn't have to wait as long.

My knives now slice and dice with ease. Coupled with some new cutting boards, I feel much better about my kitchen adventures. I've planted some herbs in the yard to start incorporating them into dishes, so who knows what'll be next? I'll be on the lookout for new tools and inspiration.