Tigers of a Different Stripe 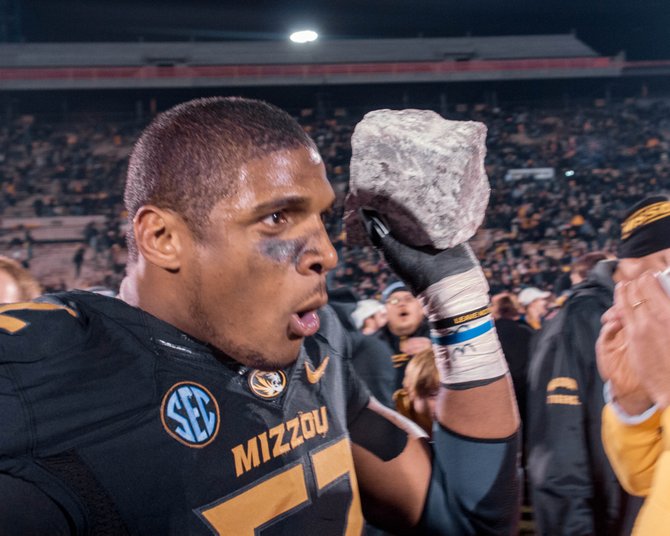 The tweet was short, sweet and as deliberate as it could be: "We support Tigers of all stripes at Mizzou. Proud of you. @MikeSamFootball. #OneMizzou."

There it was. Progress. Evidence that our nation is evolving and becoming more tolerant of the "other." Proof that we can actually mean it when we talk about liberty and justice for all in the United States and declare that all are "created equal." Indivisible. E Pluribus Unum. Out of many, one.

Even if he's gay.

That tweet was, of course, from the University of Missouri telling the world that it supports its football superstar, Michael Sam, in the days following his announcement that he is gay, using powerful and inspiring words. "I just want to own my truth," he told The New York Times. Sam left the closet weeks before the NFL draft and, as the SEC's best defensive player, he is surely high on at least one professional team's wish list.

Sam is different from other gay NFL players because, like so many others of his generation, he has no desire to hide his true self to make bigoted people (and fellow players) feel more comfortable. He is willing to step out before he enters the NFL to become a leader against homophobia in America. He, clearly, is ready to blaze a needed trail.

I was combing through #StandbySam tweets just hours after I edited a book chapter about James Meredith's violent entry into Ole Miss in 1962. In that chapter, I learned even more about the resistance to the integration that most white Mississippians feared and believed would end the world as they knew it (which, admittedly, it did ... thankfully for us all).

It is horrifying to think now that two people died at Ole Miss, and Mr. Meredith was later shot, because he was willing to lead us away from the temptation of bigotry and hatred that surrounded us in Mississippi. And a state-funded university, along with the state government and everyday citizens, did everything in its power to stop that change.

But Mr. Meredith realized that if not him, then who—a vision I'm guessing Mike Sam has now. Not to mention, it's clear that both of them were sick and tired of being sick and tired, as Mrs. Hamer put it, of not being able to publicly live as free and equal Americans. They are ordinary men who found extraordinary courage to do the right thing for themselves and others like them.

In so doing, Meredith and Sam both gave us the chance to save ourselves and our society from the worst instincts of too many human beings—to judge, to hate, to disparage, to mock and to discriminate against those they believe are not equal to them.

Back when Mr. Meredith answered the hero's calling, many white Mississippians quoted the Bible to justify the separation of the races and subjugation of black people. Now, as Mr. Sam tells the world he plans to be openly gay in the NFL, many homophobic Americans use the Bible to justify why he doesn't deserve the rights and respect of those who love someone of the other gender.

Thinking about these two men, however, makes me shudder at the hypocrisy of many in our nation and, certainly, those right here in Mississippi who voted a few years back to re-affirm a law against gay marriage already on the books—just to be mean (and throw meat to radical-right voters). Of course, it's despicable to claim to believe in the "love one another" messages of the Bible and still point hatred and judgment toward those of another race or who love differently.

But what about the people who have LGBTQ family members, friends and co-workers and love them dearly and even respect them as individuals—as long as they don't go public and live their truth, which can simply include not having to hide who they love? We all know conservative government officials nationally and right here in Mississippi with gay and lesbian loved ones—but who support the worst kinds of homophobic laws and rhetoric against them.

This brings to mind how so many white people claimed to have loved their black nannies and neighbors back a few decades, but didn't dare allow them to register to vote or enroll at Ole Miss.

We live in a state where so many people take a "don't ask, don't tell" approach to LGBTQ family members and neighbors: We love and tolerate you, but don't dare speak out and try to get more rights. This, to me, is sick and anything but the love that the spiritual texts so many claim to worship tell us to embrace and model.

Not to mention, it's dangerous. Let's be blunt: We lose too many people in our state to AIDS and suicide who are either sneaking around on the down low to try to be who they really are, or who believe their lives are not worthy, or are bullied for being "sissies," or told by their own parents that they are going to hell because they want to love someone of their own gender.

Make no mistake: Our homophobic culture helps kill these people, many of them still children. We should be ashamed.

Put another way: Once again, just as in the time of Mr. Meredith's heroism, many are creating the history that their grandchildren indeed will be ashamed of and not want to talk about. How, they will think shamefully, could their own parents and grandparents have voted to not allow two people who love each other to marry and enter a committed relationship? And how could this generation have allowed the emblem flown by the rioters at Ole Miss to remain in our state flag to tell the world Mississippi hasn't changed?

Think about it: We know so much about what happened in the 1960s and before now because so many people were willing to spew and vote hatred right into the history books. And now we live with the shame of that righteous bigotry.

Right now in our state and our nation, we have a choice. I urge everyone reading this to think about how you want your grandchildren to think of you. Do you want them to change the subject when this decade is brought up so they don't have to talk about how backward you acted toward "the other"? Or, do you want them to say, "My people fought for freedom for all. I'm so proud."

The good news for our nation and state is that Michael Sam's fellow millennials have much more tolerant views than older generations, including here in Mississippi. Sam is coming out among fellow college students, straight and gay, who see him as a hero and are not lining up to throw rocks and M-80s at him, as they did to Mr. Meredith, as he reached for his truth.

But each of us, regardless of age, matters in the quest to end hatred. So ask yourself: Are you a person your offspring will want to forget? And are your children ashamed of you and what you stand for already?

The answer could be sobering.