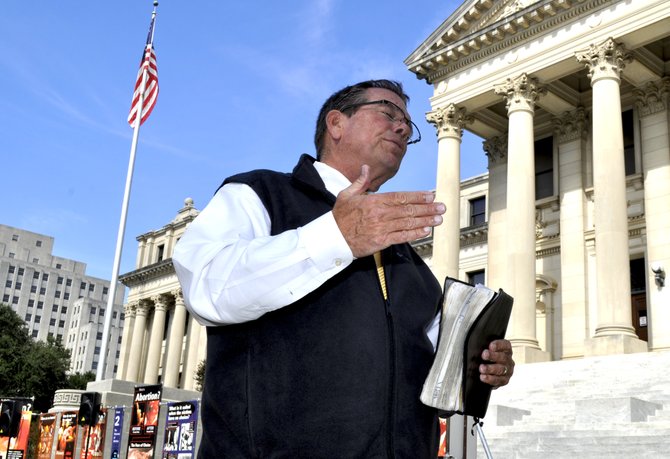 Two police cars were on the scene around 9:30 a.m. Monday, as more than a dozen protesters manned all four corners of the State Street and Fondren Place, just in front of JWHO, carrying large signs with pictures of aborted fetuses and biblical scripture.

Later, the abortion opponents rallied on the front steps of the Mississippi Capitol. Operation Rescue America leader Flip Benham preached to a crowd of about 20 supporters, most of whom had come to Jackson from different corners of the country.

Benham said he has held so many rallies, he can't remember all the places he's been. In an interview with the Jackson Free Press Monday morning, he explained why he chose Jackson as a site for this rally.

"Jackson is one of five states that only has one operating abortion mill," Benham said. "We're trying to present God with at least one state that is completely abortion-free."

Benham told the crowd that the battle is being won in the streets, but that changes to the law of the land usually lags behind the change of heart that "the people" experience.

While many of the protesters were from out of state, Johnny Brekeen was one Mississippian who came out Monday to show his support for Operation Rescue America. The McComb man got involved in the anti-abortion movement during the personhood campaign in 2011. Mississippians rejected the amendment to the state constitution that would have redefined life as beginning at conception.

"Why not go after the weakest link?" Brekeen said, referring to Mississippi. "If we can target a state of refuge and make people aware of what goes on (inside abortion clinics), why wouldn't we?"

Monday's protest came three days after JWHO and Wake Up Mississippi, a pro-abortion-rights political organization, began hosting "This Clinic is a Refuge," a week-long event to rally support for the clinic. Supporters held a women's rights poetry slam at Soul Wired Cafe Friday night and rallied Saturday outside the clinic and in front of the Governor's mansion.

The clinic has two more events planned—a "lunch and learn," complete with free lunch, at the clinic starting at 11 a.m. Tuesday, and a women's health caravan that will leave from the clinic at 11 a.m. Wednesday and tour the city.

JWHO has drawn the attention of national protesters—and the press—before.

In August, a war of words erupted on The Clarion-Ledger website after that newspaper published a picture, taken by an anti-abortion protester, of a woman being loaded into an ambulance for transport to a local hospital following a medical procedure at the clinic. An unmarked package delivered to the clinic in June prompted police to call in the bomb squad.

In spring 2012, lawmakers threatened JWHO and its owner, Diane Derzis, with closure when they passed a bill requiring doctors performing abortions to have admitting privileges, which the physicians have tried and failed to get multiple times in the past.

Federal Judge Daniel P. Jordan initially blocked the law, then reversed course and allowed it with one stipulation—the clinic would be permitted to continue operations while its physicians continued to try to secure admitting privileges.

In August, the state filed notice that it would ask the 5th U.S. Circuit Court of Appeals in New Orleans to overturn Jordan's decision. Today, the clinic remains operational under his ruling.

So Mr. Flip Benham wants to present to "God a state that is abortion free"? Does this man know that abortions were being done in Jackson even before there was an "OFFICIAL" clinic. I don't want to see women at risk again with back alley procedures.

This article fails to mention that the rally was interrupted & opposed by counter protest!