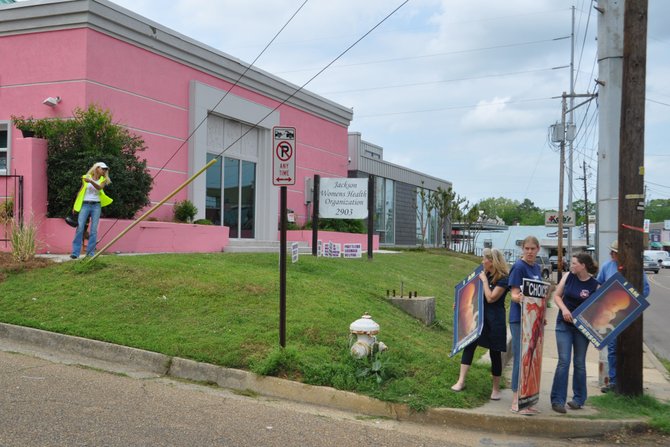 Mississippi’s sole abortion clinic received another reprieve that will allow it to continue operating, at least for the foreseeable future. Pro-life protests at the clinic coninue. Photo by R.L. Nave.

After the man put his arms in the air and proclaimed that he was unarmed and on public property (the clinic is privately owned), a Jackson police officer forced the man to exit the clinic and leave the premises.

The incident briefly tamped down what had been a celebratory mood at JWHO, which this week again staved off attempts by state health officials to put the clinic out of business.

On Monday, U.S. District Judge Daniel P. Jordan III halted a process that likely would result in JWHO's closure and make Mississippi the first state without an abortion clinic. Jordan ruled that the state cannot close the clinic before the conclusion of a pending federal lawsuit over a 2012 state law requiring all abortion doctors to obtain admitting privileges from a local hospital.

The Mississippi Department of Health had scheduled a license-revocation hearing for April 18, but with Jordan's ruling, that hearing has been called off.

As Mississippi's sole remaining abortion provider, JWHO is widely regarded as a trophy in the ongoing battle over abortion in the South.

Alabama recently passed an admitting privileges law similar to Mississippi's. Derzis is also in the middle of a legal fight over New Woman, All Women, an abortion provider in Birmingham. Last year, Alabama health officials revoked the Birmingham clinic's license. Derzis, who owned the clinic at the time, said she is now renting the clinic to a private physician.

Meanwhile, abortion opponents plan to re-introduce the question of personhood--a definition of when life begins to be enshrined in the state Constitution--to Mississippi voters. Personhood measures in Mississippi and other states have been unsuccessful.

"I was disappointed that the judge would proclaim from on high to keep the clinic open," said Leslie Hanks, a pro-life demonstrator who traveled to Jackson from Colorado.

Hanks said she recently helped put Personhood on the ballot in her home state for the fourth time. Clutching a Bible outside of JWHO, Hanks added that "bloodshed begets bloodshed," meaning that she believes performing abortions are tantamount to terrorist actions, such as the bombings at the Boston Marathon April 15.

It's that kind of talk that worries Derzis. In 1998, Eric Rudolph bombed a Birmingham clinic Derzis owned at the time. Rudolph was also convicted of the 1996 Olympic Park bombing in Atlanta, which drew comparisons to the explosions in Boston.

Upon hearing the news of Jordan's ruling, Derzis said she called the Jackson Police Department and Federal Bureau of Investigation to put the agencies on alert.