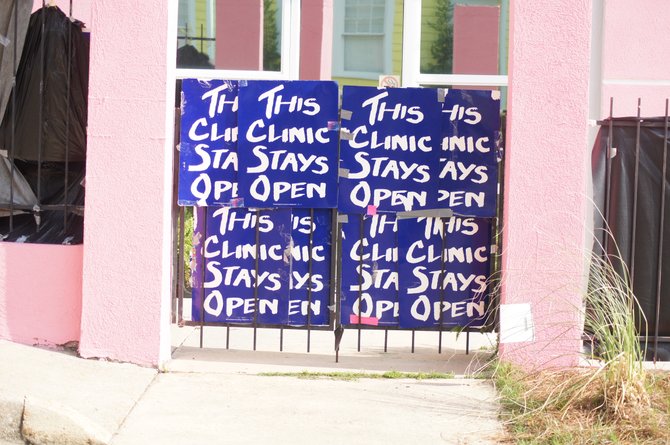 As Mississippi's sole remaining abortion provider, JWHO is widely regarded as a trophy in the ongoing battle over abortion in the South. Photo by R.L. Nave.

Although officials from Jackson Women's Health Organization are applauding yesterday's federal court ruling to keep the facility open, the mood remains tense at the Fondren clinic.

"There's a heightened sense of uneasiness," JWHO's owner Diane Derzis told the Jackson Free Press at the clinic this morning.

That sense became more pronounced when a young bearded man wearing a military-style waist pack entered the clinic without an appointment this morning. A Jackson police officer forced the man, who proclaimed that he was unarmed, to exit the clinic and leave the premises.

On Monday, Jordan extended the injunction, ruling that the state cannot close the clinic while it still has a federal lawsuit pending to challenge the 2012 law. Jordan's ruling came three days before the Mississippi Department of Health was scheduled to hold a license revocation hearing for the clinic over its acknowledged inability to get the required admitting privileges. That hearing has been cancelled.

As Mississippi's sole remaining abortion provider, JWHO is widely regarded as a trophy in the ongoing battle over abortion in the South. Alabama recently passed an admitting privileges law similar to Mississippi's. Meanwhile, abortion opponents plan to reintroduce the question of personhood--a definition of when life begins that is enshrined in the state Constitution--to Mississippi voters. Personhood measures in Mississippi and other states have been unsuccessful.

"I was disappointed that the judge would proclaim from on high to keep the clinic open," said Leslie Hanks, a pro-life demonstrator who traveled to Jackson from Colorado.

Hanks said she recently helped put Personhood on the ballot in her home state for a fourth time. Clutching a Bible outside of JWHO, Hanks added that "bloodshed begets bloodshed," meaning that she believes performing abortions are tantamount to terrorist actions such as Monday's bombing of the Boston Marathon.

It's that kind of talk that worries Derzis. In 1998, Eric Rudolph bombed a Birmingham clinic Derzis owned at the time. Rudolph was also convicted of the 1996 Olympic Park bombing in Atlanta, which drew comparisons to yesterday's explosions in Boston.

Upon hearing the news of Jordan's ruling, Derzis said she called the Jackson Police Department and Federal Bureau of Investigation to put the agencies on alert.

My message is to Leslie Hanks (quoted in this article)

"I was disappointed that the judge would proclaim from on high to keep the clinic open," said Leslie Hanks, a pro-life demonstrator who traveled to Jckson from Colorado."

Then, you are admitting that you believed that the Judge would break the law to please you and other members of your hate group.

I have one question for Leslie Hanks. Did you bring any food, money, educational opportunities, health care for the poor and under-served children of MS and their Moms? Many of these babies and their moms are alive but not well. Did you come with any plans to adopt any of the children who need parenting and the emotional support of a loving and caring person.

The next time you come to MS, please bring something other than you disappointment.

I do not understand why no one is discussing the hospitals' role in all this. Why are these perfectly good docs not being allowed privileges? I went to that clinic for my annuals for years. They are good well trained people. There is no reason for the hospitals to be refusing the requests for privileges they need to comply with this silly law.

Also where are all the small government conservatives who so regularly call for government out of private lives and such? This entire idea is wacky. If you are in any way uncomfortable with abortion do not have one. No one wants to force you. We just don't them forcing others to not have one if they need it. Seems like this would be one we'd all agree on. Obama care is considered government interference but this isn't?