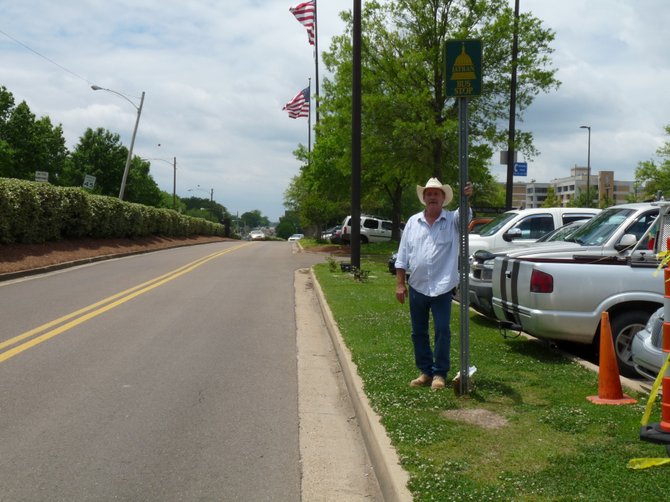 Veteran Jerry Hammond isn’t handicapped but, he said, “It just isn’t right” the way disabled veterans have to wait in the driveway for JATRAN buses at the VA Medical Center. Photo by Tyler Cleveland

The intersection of Meadowbrook Road and State Street is generally buzzing with business and traffic. One of the busiest food stores in Jackson is located there, as is a high-traffic service station, a bank and a pharmacy. The average Jacksonian would look at the intersection and remark at how vibrant the intersection is.

Scott Crawford looks at the intersection and sees what is not there: sidewalks and an adequate bus stop.

Crawford, a 46-year-old retiree, has been bound to a wheelchair for 13 years, ever since doctors diagnosed with him with  progressive multiple sclerosis. He can't drive to the Piggly Wiggly for groceries, and he can't walk to the Burger King to get a chicken sandwich for lunch. He is reliant on public transportation and his motorized wheelchair.

He can manage getting around, but it isn't easy. With Jackson's narrow sidewalks, or sometimes no sidewalk at all, traversing the capital city in an electric-powered chair is anything but easy.

"We prioritize our streets for drivers and not for pedestrians and the disabled," Crawford said. "It's wrong, and we need to stop it."

The city has taken steps since receiving a 2009 consent decree from the U.S. Department of Justice following a lawsuit brought against its public transportation system JATRAN by disabled citizens who complained that the city wasn't in compliance with the Americans With Disabilities Act.

A 2011 case study by the Transit Access Project, a watchdog for paratransit issues, gave the city credit for taking action, but said more is needed.

"Some progress has been made in Jackson, while some issues remain unresolved, and new issues have developed," the study stated. "Jackson riders with disabilities report that the purchase of new buses resulted in improved access to lifts and ramps, and that the new management company has been more responsive; however, riders indicate that paratransit capacity has not increased, and callers attempting to make reservations on paratransit are still being turned away. Also, the city and JATRAN have missed several deadlines established by the consent decree."

City Attorney Pieter Teeuwissen said that, in 2009, he advised newly elected Mayor Harvey Johnson Jr., to not try to fight federal intervention, and instead work with the Justice Department to make Jackson more accessible. He said since they made the adjustments in regards to JATRAN, ridership is up, and not just for disabled citizens.

"We did some basic work bringing the buses into compliance, and there is more work to be done on the bus stops where the money has already been allocated, and the work hasn't started yet." Teeuwissen said. "I think we've made progress. We've got more to do, but we're on the right track. If whoever comes into office here will continue to implement the plan we have in place and follow the consent decree, Jackson will continue to be a more accessible city for all its citizens."

Christy Dunaway, director of Living Independence for Everyone of Mississippi, or LIFE, more or less agrees with the study, but said disabled Jacksonians still have to push for equal rights. Dunaway has been doing just that since the late '90s, when she started attending public meetings to promote awareness for citizens with disabilities.

"There are individuals inside the city government who listen and are attentive, and you can tell they care," Dunaway said. "But overall, when it comes to the entire city, we are not a priority. We have to fight tooth and nail for everything that gets done. ... We shouldn't have to constantly remind them that we are here."

Dunaway isn't alone. Crawford completed a survey of Jackson streets and has filled a 2-inch binder full of examples, complete with pictures, of the city's shortcomings in ADA-related infrastructure. The most damning example is the bus stop at the G. V. (Sonny) Montgomery VA Medical Center on Fortification Street, which doesn't have a covered waiting area or even a bench, let alone a wheelchair ramp for Jackson's disabled veterans. Crawford described the situation as "shameful."

Jackson ADA Compliance Director Sam Glease, who is blind, was one of the original protesters who petitioned former Jackson Mayor Frank Melton to recognize civil rights for the disabled. The bus stop at the V.A. Hospital is "one of our oldest issues," he said.

Glease said the city administration has recommitted itself to listening to its disabled constituents, and making progress where it can when it comes to sidewalks, curb cuts and wheelchair ramps.

"The city of Jackson in the last four years has taken tremendous strides," said Glease, who reports the needs of Jackson's disabled citizens from the ADA advisory meetings back to the city administration.

"Funding is a prime problem because we just don't have the money to do everything that needs to be done," he said. "That's why the ADA says the city administration must make 'reasonable accommodations.' The problems we are facing go back decades, and it's not just a Jackson problem. It's all over the country."