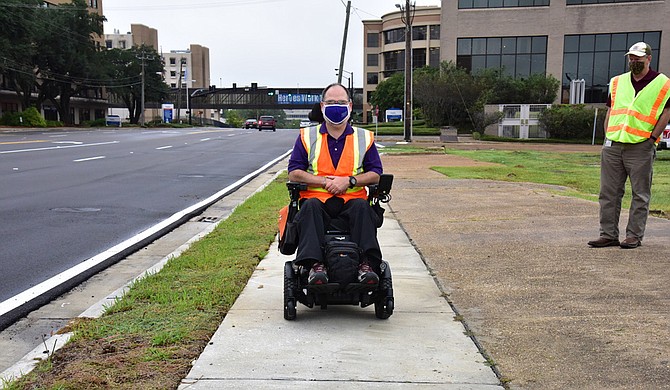 Scott Crawford, a retired clinical neuropsychologist and a member of the City of Jackson’s Americans with Disabilities Act Advisory Council, has spent years advocating on behalf of people with physical disabilities in the City and working to see important changes to Jackson's streets and sidewalks implemented.

Most recently, Crawford has been working with Robert Lee, the City’s traffic engineer, and Herbert Humphrey, Jackson's ADA Advisory Council coordinator, to repair badly damaged sections of Fortification Street, State Street and the Belhaven neighborhood that had those areas all but impassible to wheelchair users like Crawford. Before the repairs, Crawford had described some of those areas as a "pile of rubble" and said wheelchair users in Belhaven had to ride in the street with traffic and put themselves at risk due to the inaccessibility of the sidewalks.

Crawford initially saw the full seriousness of the problems with Jackson's streets in 2013, when he was speaking at one of Millsaps College's Friday Forum events about ADA-compliant accessible communities. Charles Scrivener, a communications instructor at the University of Mississippi Medical Center's Addie McBryde Center, was in the audience and asked Crawford to help him document the damaged streets because he had to navigate those areas to get to and from work. Crawford spoke with Judy Sykes, the ADA Coordinator at the Mississippi Coalition for Citizens with Disabilities at the time, and worked with Humphrey and the City to see the improvements implemented.

"This is a big win for everyone," Crawford says. "One point we (in the ADA Advisory Council) make is that when it comes to sidewalks, what works for people with disabilities works for everyone else, like people pushing strollers. My only regret is that it took seven years to make it better."

Crawford was born in Boston, Mass., and moved to Mississippi with his family in 1976. He received his bachelor's degree in psychology from Millsaps College in Jackson 1989 and worked at Mississippi State Hospital for a year before enrolling at the University of Southern Mississippi, where he received his doctorate in clinical psychology with a subspecialty in neuropsychology in 1995. He did his internship and post-doctoral training at the University of Miami School of Medicine in Miami, Fla., and remained in the city after taking a job at Miami-Jewish Health Systems, where he supervised post-doctoral fellows and taught doctoral courses at night. Doctors diagnosed him with a rapidly progressive form of multiple sclerosis in 1999, and he had to retire due to his disability in 2000.

Multiple sclerosis is a disease of the central nervous system caused by one’s own immune system attacking the nerves of the brain and spinal cord. Crawford's condition left him needing to use a power wheelchair to get around. He also suffers from partial paralysis of the vocal cords, called dysphonia. Other common symptoms of multiple sclerosis include abnormal fatigue and involuntary clenching and spasms in the arms and hands, called spasticity.

Crawford moved from Miami to the Fondren neighborhood in Jackson in late 2006. Shortly after arriving, he found that the city's JATRAN buses weren’t wheelchair accessible and that Jackson had a lack of accessible sidewalks, which prevented people with disabilities from getting around. In 2007, he learned that Jackson had no ADA Compliance Coordinator, public notice, grievance procedure or self-evaluation or transition plan.

"Basically, the city had completely ignored the Americans with Disabilities Act which was passed in 1990," Crawford says. "After reaching out to the City Council and Mayor’s Office and not getting any response, I filed a formal complaint with the Department of Justice and helped organize a protest outside City Hall in Sept. 2007, along with Dr. Christy Dunaway‬, who was then the executive director of Living Independence for Everyone. Then Mayor Frank Melton hired our first ADA Coordinator, Sam Gleese."

As part of the ADA Advisory Council, Crawford gives advice about the Jackson’s transition plan, which is a report that the City needs to revise every five years detailing plans to bring programs, activities and services into compliance with the ADA. Other important issues the council handles include accessible voting, advising JTRAN on access and bus operator training, performing accessibility reviews of buildings and providing feedback to Central Mississippi Planning and Development about transportation plans. Crawford also gives presentations about accessible housing and livable communities and consults with the Mississippi Home Corporation to increase the availability of accessible and affordable housing in the state.

In addition to his work with the ADA Advisory Council, Crawford volunteers with the National Multiple Sclerosis Society and chairs the Government Relations Committee in Mississippi. He is also a former chairman of the Mississippi Coalition for Citizens with Disabilities.

Crawford is also well known around Jackson for his "Keep Building Jackson!" project, which is an idealized model of a fully accessible version of Jackson that Crawford built out of LEGO Bricks. The project, which Crawford has been working on for 10 years, is usually put on display during holidays in the city. This year is the first time it will not go on display due to the ongoing COVID-19 pandemic.

"For me, life was and still is all about service to others," Crawford says. "I can no longer contribute in my old profession due to multiple sclerosis, but there is no end of problems to solve in this world, so I use what I know and the abilities I still have to make a difference whenever and wherever I can. Creating a more welcoming society for people with disabilities is an ongoing need, especially in the deep south."