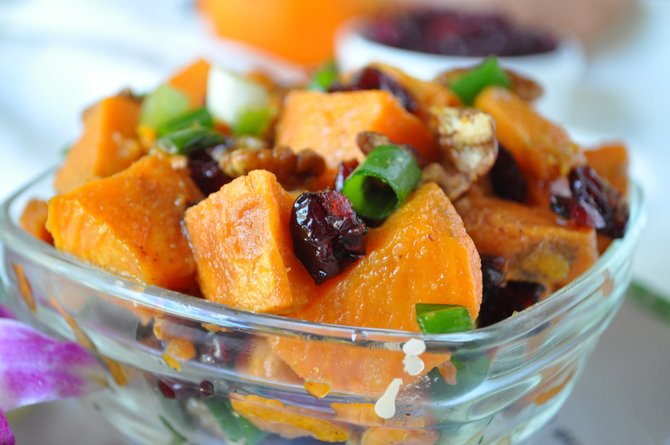 Sweet potatoes are a more versatile ingredient than they are given credit for—try something new, like sweet potato salad. Photo by Courtesy Holly Clegg

Sweet potatoes are as southern as sweet tea and the Sweet Potato Queens themselves, but these orange-fleshed treats are a lot more versatile than that old standby, the Thanksgiving sweet potato casserole topped with mini marshmallows.

They can be roasted and eaten with butter like an Irish baked potato, sliced and fried, or scooped out and the skins topped with a mixture of potato pulp and cheese for a quick hors d'ouevres. Sweet potatoes can also star in a variety of sweet and savory dishes from cornbread to potato salad.

Sweet potatoes are native to Central and South America. Remnants of sweet potatoes dating back thousands of years were discovered in Peru, and the first Europeans to sample them were members of Christopher Columbus' expedition in 1492.

They are distantly related to Irish potatoes, but are botanically distinct from a true yam, for which they are often mistaken.

"True yams actually are a tough tuber (cream colored) grown in the tropics but not in the U.S., and a true sweet potato is an enlarged root of the sweet potato plant that is starchy when harvested but becomes sweeter after storage," says Holly Clegg of Baton Rouge, La., author of the "Trim & Terrific" cookbook series, and a spokeswoman for the  Louisiana Sweet Potato Commission.

"I use sweet potatoes to replace potatoes in any recipe for an added dose of nutrition and flavor," Clegg says. "Sweet potatoes provide twice the recommended daily allowance of vitamin A and more than one-third of the requirements for vitamin C. They are an important source of beta-carotene, vitamin B6, iron, potassium and fiber. Containing virtually no sodium, one medium sweet potato contains only about 150 calories."

The U.S. Department of Agriculture reports that Mississippi produces 19 percent of the sweet potatoes consumed in the U.S. each year.

The real beauty of this humble ingredient is its sweet flavor and versatility as an ingredient. Try these recipes and taste  for yourself.

Preheat oven to 425 degrees Farenheit. Line baking sheet with foil and coat with nonstick cooking spray. Toss together potatoes with ginger, cumin and one tablespoon olive oil. Roast about 30 minutes or until potatoes are crisp. Cool and transfer to a large bowl. Add green onions, cranberries and pecans.

Source: "Too Hot in the Kitchen," by Holly Clegg