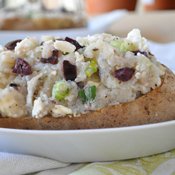 "Meatless Monday" is more than just a cute catchphrase. It's an international campaign that encourages people to eat less meat for their personal health and the health of the planet. Growing vegetables has less of an impact on the earth than raising animals for food, and vegetables have fewer calories than meat.

The idea actually dates back to World War I, when the U.S. Food and Drug Administration rationed some items and encouraged families to reduce their consumption of key staples to help the war effort. The FDA coined the slogan "Food Will Win the War," and the terms "Meatless Monday" and "Wheatless Wednesday" to remind Americans to reduce consumption of meat and bread. "Meatless Monday" made a return during World War II, when meat was rationed again.

Marketing professional Sid Lerner, in conjunction with the Johns Hopkins School of Public Health Center for a Livable Future, founded the contemporary "Meatless Monday" initiative in 2003. It follows nutrition guidelines developed by the USDA.

The idea is catching on. Top chefs such as Mario Batali are adding "Meatless Monday" selections to their menus ,and diners are becoming more aware of their food's origins. Twenty restaurants in Aspen, Colo., began offering "Meatless Monday" options in 2011. Diners are also flirting more with vegetarianism and flexitarianism, a diet with very little meat. In 2011, Oprah Winfrey encouraged viewers of her show to consider going meatless for a day when she did a program about vegan living. A report by the American Meat Institute in February 2011 found that 18 percent of American households now participate in Meatless Mondays.

There are plenty of alternatives to meat, including beans, potatoes, pasta, rice and vegetables. Just add bread and salad for a complete meal.

Gotta-Try-It Hominy Casserole
Hominy has deep southern roots, but it's not an ingredient many of us use today. It has a chewier texture than regular whole-kernel corn. Give this Southwestern-flavored casserole a try.

Preheat oven to 350 degrees. Drain one can of hominy, and then blend with remaining ingredients except cheese. Pour into a greased two-quart casserole. Sprinkle cheese over top. Bake for 35 minutes. Makes four servings.

Drain and rinse black beans and combine in mixing bowl with refried beans. Add half of the salsa and stir until combined. Spread in bottom of small casserole dish. Make cornbread batter according to package directions and spread over bean mixture. Bake at temperature specified on cornbread package until cornbread is golden brown. Serve with a dollop of sour cream and a sprinkling of grated cheddar cheese, if desired. Serve over cooked Spanish rice to make it even heartier.

Stuffed Greek Potatoes
These baked potatoes make a hearty vegetarian meal for two, full of Mediterranean flavor. And they only have 229 calories each.

Preheat oven to 400 degrees. Wash potatoes and dry thoroughly. Place potatoes directly on oven rack and bake approximately one hour or until soft when squeezed. Let potatoes rest until cool enough to handle. Cut thin slices off top of each potato and scoop out inside, leaving thin shell. In a bowl, mash potatoes with yogurt and oregano until creamy. Stir in olives, green onions and feta. Spoon mixture into potato shells. Reduce oven to 350 degrees and bake potatoes for approximately 15 minutes or until cheese is melted and potatoes are hot. You can also reheat these in the microwave.

Just about everyone loves macaroni and cheese, but homemade is so much better than the stuff that comes in a box. This version is hearty enough to be the main course.

Cook macaroni in boiling salted water for about eight minutes. Drain, then pour into greased casserole dish. In a saucepan, make a roux with butter and flour, then add milk and cheese until sauce reaches desired consistency. Add half the cheese to the sauce, and stir until it melts. Pour sauce over macaroni and stir well to combine. Sprinkle top with remaining cheese. Bake at 350 degrees for 20-30 minutes, or until cheese is golden brown and sauce is bubbly.