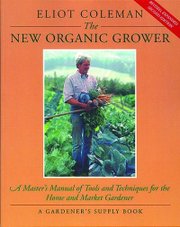 Take advantage of the plentiful organic growing advice in these books and more.

If you could suggest to beginning to fairly advanced gardeners only one reference book about organic gardening, what would it be?

The first ones that come to my mind are Eliot Coleman’s books. The one that’s most timely is his “The Winter Harvest Handbook: Year Round Vegetable Production Using Deep Organic Techniques and Unheated Greenhouses” (2009, Chelsea Green Publishing, $29.95). It’s chock full of information about growing food in cold weather.

Or, for year round, try his “Four-Season Harvest: How to Harvest Fresh Organic Vegetables from Your Home Garden All Year Long,” by Eliot Coleman and Kathy Bary (1992, Chelsea Green Publishing, $24.95). It’s the basis for his cold-weather book, going more in-depth about winter plants.

For the basics, check out “The New Organic Grower: A Master’s Manual of Tools and Techniques for the Home and Market Gardener (A Gardener’s Supply Book),” by Eliot Coleman, Sheri Amsel and Molly Cook Field (1995, Chelsea Green Publishing, $24.95). I think what Coleman has done at his Four Seasons Farm in Maine is simply fantastic and a model for any would-be market gardeners—that is, people with a limited amount of space like a backyard and turning it into cash.

To go deeper into the history of Coleman and organics, and its fundamentals, one could point to “The Good Life: Helen and Scott Nearing’s Sixty Years of Self-Sufficient Living by Scott Nearing and Helen Nearing” (1990, Schocken Books, $16.95). It’s a homesteading bible.

The Nearings epitomized the “back to the land” movement, leaving the city in 1932 to live off of the land and their own backs and hands, and inspired a generation—including Eliot Coleman, who bought six acres of their land and helped establish something of an early organic commune.

OK, I agree, this is starting to sound a bit cultish, but between the Rodales, founders of Organic Gardening Magazine and the organic science Rodale Institute, and the Walters family, of ACRES USA fame—these are the recognized pioneers of the ecological and organic farming movement in America.

Which brings us to the missing piece: What about the South? All of the previous books, and most on organics, are written by and about people living in the Northeast. Well, I’m happy to say, there’s one southern book that should be on everyone’s bookshelf (no matter what region you live in).

“Organic Gardening Down South,” by Nellie Neal (2008, Mackey Books, $15.95) is written specifically for people who want to grow organically and live in the South—or, as Neal says, where the ground doesn’t freeze and the bugs never die! If you can grow organically in the Deep South, you can grow anywhere.

People who live in Maine, like Coleman, don’t have to contend with T-shirt weather and mosquitoes on New Year’s Day. People in California certainly have sunny weather, but not routine simultaneous triple digits in heat and humidity! Tropical and semi-tropical weather patterns—especially, as she notes, compounded with climate change warming temperatures—poses unique challenges to the Southern organic gardener.

Neal, who is popularly called The Garden Mama, is an authentic gardening expert of some 50 years, as she admits. Perhaps a prophet without honor (or enough of it, anyway) in her own land, Neal hosts a local radio show on gardening, writes a popular column, and lives in Fondren. (Visit her website: gardenmama.com.)

Neal is a true organic pioneer—in the South as much as Coleman, at least.

So, if I could suggest only one organic gardening book? As much as I am a fan of Coleman, if you live in the South, for good practical advice, especially for the new grower or newcomer, read “Organic Gardening Down South.” Then, read Coleman’s books!