Antibiotics in Your Organic Apple? 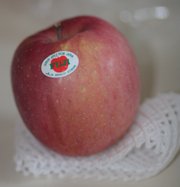 Certain types of apples, including Fuji, are usually treated with antibiotics—even if they are marked as organic.

When people think of organics, they think that the food they buy is free from synthetic chemicals of any kind. However, as noted in a recent article in ACRES USA magazine, organic apples and pears may be treated with antibiotics.

It all started in 1995, when the National Organics Standards Board voted to allow antibiotics for treatment of fire blight, a bacterial disease. Specifically, NOSB allowed the use of the antibiotics streptomycin and tetracycline; then, in 2008, added oxytetracycline hydrochloride. (See "Antibiotics in Fruit Production: A Challenge to Organic Integrity," jfp.ms/fruitantibiotics)

Allowing antibiotics in fruit caused an uproar when it started and recently came to a head with the review of the ruling in April. It was seen as a way of "watering down" organic standards to accommodate industrial agriculture. The use of antibiotics in the production of meat is strictly prohibited by organic standards, while prolific with the general food industry.

The potential and real dangers of antibiotics in the production of food are well known.

According to the U.S. Food and Drug Administration, 80 percent of U.S. antibiotic use is on livestock, not humans, leading to increasingly virulent strains of bacteria that are resistant to antibiotic treatment. They're used in livestock to increase weight (and profits), not to prevent disease, but have the added "benefit" of allowing the animals to be kept in overcrowded and poor sanitary conditions. Certified organic meat production is, of course, the exception to these poor standards.

This inconsistency in regard to fruit has long been a troubling point for those concerned about the integrity of organic standards.

One might ask, "Well, if it's needed by the fruit growers, why prohibit it?" The answer is simple: It's not needed if a farmer grows apples resistant to blight. As it is, because most consumers are familiar with popular varieties, such as Fuji, Gala, Golden Delicious and Granny Smith, that's what they buy. But due to their susceptibleness to fire blight, farmers routinely spray these varieties with chemicals as a preventative measure against the disease.

That doesn't mean orchard growers must grow those varieties. Other popular varieties, including Red Delicious and Northern Spy, are not susceptible to fire blight.

Due to public opposition, the ruling that allows antibiotics in organic apples and pears expire Oct. 21, 2014. Until then, consumers should pay attention to the varieties they buy.

Consumer beware  Regardless of the USDA Certified Organic label, if you buy Fuji, Gala, Golden Delicious and Granny Smith apple varieties, they are likely to have been sprayed with antibiotics. Likewise with pear varieties D'Anjou, Bartlett, Aurora and Duchess.

For homeowners and backyard growers, fire blight can be a problem as well, particularly this time of year. In May, especially in wet weather, it can appear on the tips of branches giving a scorched appearance (hence, it's name "fire" blight). Dr. Wayne Porter of the Mississippi State University Extension Service says that even the use of antibiotic treatment won't work once it's begun; the best control is cutting back the diseased limbs, and only in dry weather. Do not fertilize the tree, as the blight will likely infect the new growth. (See "Controlling Fire Blight")

For planting in Mississippi, apples are traditionally more amenable to the northern part of the state, but some varieties will grow elsewhere, using recommended root stocks (M7A or MM106), according to the MSU extension service. Some recommended varieties: Royal or Imperial; Smoothe, a Royal Delicious type; Ozark Gold; Red Chief, Mercier Variety; Arkansas Black. On the coast: Golden Dorset, Anna, Ein Shiemer.

Pears are common statewide. Kieffer is the most well-known variety, but it's not resistant to fire blight. Better are Orient and Moonglow (and Baldwyn for the coast; Ayers for North Mississippi).

For more on antibiotics, watch the Frontline special from PBS, "Is Your Meat Safe? Antibiotic Debate Overview":  jfp.ms/Frontlineantibiotics

Here is a chart of resistant and susceptible varieties from the quarterly Beyond Pesticides.