How Many Green Beans for That? | Jackson Free Press | Jackson, MS

How Many Green Beans for That? 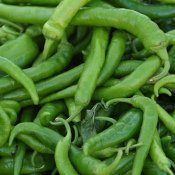 I use my personal calculus to price new gardening stuff.

Father's Day often presents a problem: What to get Dad? If he's into gardening, the answers are easy.

My problem is the cost. I measure purchases for gardening on a rather personal calculus based on how much physical labor it takes to pick a dollar's worth of produce. A $349 cultivator, for example, costs about 110 pounds of green beans, and that's a lot of green beans! Besides, I already have a hoe. I bought it at a local garden store for, I think, less than $25. (Eight pounds of green beans—still a lot of picking.)

The reason dads, some of us anyway, stare at those cool catalogs isn't necessarily that we actually want to buy those things, only that we think if we happened to have one or two, it would be pretty cool.

It usually goes something like this: Staring at a new tractor, I think, "If I had that, I'd have to have more land. ... We'd have to move somewhere else. ... Wonder if the growing is good in, say, the Bahamas?"

In other words, Dad probably doesn't want the $30,000 four-wheel drive, air-conditioned, enclosed-cab tractor with the satellite-guided, laser-row projectors so much as he wants a sunny beach where the living is easy—before he gets back to hoeing, anyway.

Which brings me to the point: You don't have to spend a lot of green beans to make Dad happy on Father's Day.

During a recent tour of local garden stores, just to see what they had, I found all kinds of stuff. Some of it, while really cheap, are still things that a dad might like, such as a rain gauge. I saw one for $3 (and bought two). Or how about a straw hat? Why not tell Dad he looks like Indiana Jones with it on (instead of Goober from Mayberry)?

You'll find all manner of tools that maybe aren't designed by organic farmer and author Eliot Coleman but will do good, long useful service: rakes, hoes, hammers, trowels—you name it. They will probably last a lifetime, giving Dad a warm, fuzzy feeling knowing you picked it out for him.

And don't forget stuff that he needs. Maybe Dad just doesn't like forking out the cash for some things, or it's something he might not buy it on his own, like certified organic fertilizers or pricey containers that hold, carry or store stuff.

Why not just ask him, "Dad, would you like a wheelbarrow for Father's Day?"

He might surprise you. Will it work in the Bahamas?