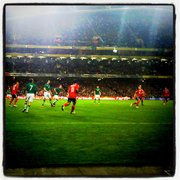 Watching Euro 2012 is interesting, and not just from a sports standpoint. The soccer has been great, of course, but the history and traditions of the teams in this tournament are captivating as well. Two examples stood out for me as I watched some of the best soccer teams in the world battle for bragging rights in Europe.

The first was an interesting story that ESPN reported June 1 about a Ukrainian soccer club: FC Start. Nazi Germany occupied Kiev during World War II when it was part of the Soviet Union. At that time, the city's soccer team was named FC Dynamo Kiev. After the city's occupation, several Dynamo players began working for a baker and formed FC Start.

The Germans believed allowing soccer would help pacify the conquered, but instead it unified them under sport. Playing a shortened league season, the players of FC Start inspired and gave hope to the city of Kiev and provided a form of resistance to the Nazis.

Seeing the people's sense of pride in their team and worried their "pacifying" plan was backfiring, the Germans decided it was time to crush FC Start. The Nazis brought in several professional German players and held a match.

Before the match, an SS officer entered FC Start's locker room and told them that they would begin the match with the Nazi "Heil Hitler" salute and, furthermore, it would be in the players' best interest not to win the game.

FC Start didn't give the German salute before the match started, and instead of losing they won both games: 5-1 and 5-3. The Nazis reward for FC Start's acts of defiance was to round up the players and send them to a concentration camp. At the camp, the Germans claimed someone had committed sabotage. As an example, they shot four FC Start players dead.

A monument stands in memory of those players who used sports to defy the Nazis and, for their defiance, paid the ultimate price. It has been 70 years since those events unfolded, but the memories live on in Kiev.

The other standout moment of Euro 2012 came as Spain defeated Ireland 4-0. Even though their team was losing, the Irish fans serenaded the players for the last few minutes of regulation play until well after the match ended.

I later learned that the Irish fans were singing "Fields of Athenry," a song about the Great Famine. Not even knowing the song or the words, the Irish song touched my heart and made me long for my family's ancestral home.