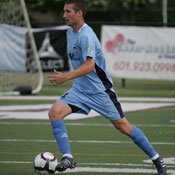 Mississippi Brilla's Michael Brown in action against New Orleans in 2010.

The Mississippi Brilla has high hopes for the 2012 season. After posting a 12-2-2 record last year and winning its first playoff game, the soccer team is looking to accomplish even more this season.

This year, the Brilla is playing its sixth season of professional soccer in the Premier Development League. The PDL is mainly for players to earn experience and increase skill by logging game time. Players often then move on to higher leagues––2011 Brilla player Bryce Taylor debuted in the pro United Soccer League this year.

Brilla head coach Dave Dixon is excited about this upcoming season. "These 20 players might be our most talented team, yet," Dixon says about his 2012 squad.

He is proud the club has signed four players from the Jackson metro area—Jonathan Brown, Stephen Roberson, Jake Files and Sina Mofidi—and he believes they can get major game time and become big contributors to the team. Dixon also has two returning players: Philip Buffington has 19 goals and 10 assists over four seasons, and Michael Brown has appeared in 50 games over five seasons.

In addition to their PDL schedule, this season the Brilla qualified for the U.S. Open Cup, a 64-team tournament made up of all levels of soccer from Major League Soccer all the way down to the smallest club divisions.

Each round offers a chance for the Brilla to host a game in Jackson. Even when the MLS squads enter the tournament, the Brilla has a chance to host a game. However, they must win in their first two rounds before they would possibly face an MLS squad.

In its first match of the U.S. Open Cup, the Brilla fell 1-0 to the Georgia Revolution in extra time.

The Brilla averages more than 1,000 fans per contest at Harper Davis Stadium at Millsaps College. Dixon is happy about the core fan base but hopes more will come out to see the team play.

"There will be goals scored; we average about seven or eight goals per game," Dixon says. "The games are exciting ... more exciting sometimes than me or the other coaches would like, but fans will see balls in the back of the net."

Scoring is a major strength of the Brilla: last season the club had three double-digit goal scorers; of them, Phillip Buffington returned for this season. However, one weakness the team needs to work on is defense, Dixon pointed out.

As excited as the coach is about the season, he might be even more enthusiastic about the Urban Soccer Project. The Mississippi Brilla began with more than just scoring goals in mind. It was founded on a mission trip to Costa Rice––"Brilla" means "shine" in Spanish––and giving back remains a big part of the organization's purpose. In the Urban Soccer Project, the Brilla go into lower income areas of Jackson to show kids what soccer is all about. Participation in the USP is free and is open to boys and girls.

"Soccer has become a sport that has left lower-income (people) behind," Dixon says.

"We have several areas in the city where we host camps," Dixon says. "I heard the first time we wanted to hold this program that 'black kids don't play soccer.' It was great to show the kids some of our players from Africa (who) used soccer to go to college and get an education. Not only did soccer get them an education, but a chance to play professionally as well—to make money."

Dixon says the first time the Brilla held a camp, only five or six kids participated while several others watched. That first year, the program slowly grew until 200 kids took part. Last year, more than 1,000 kids were able to take part in the camps.

The program needs more volunteers, and Dixon says it would be great if the Brilla fans got involved in that way.

"It is not just about teaching soccer but becoming mentors to kids and being there for them—spiritually, mentally and scholastically," he says.

Dixon hopes that a soccer field will be built as part of the Farish Street redevelopment. "Think of how great it would be to have a field with lights that the kids can play soccer on and open new doors for them," he says.

Corporate and private sponsors and donations support the Brilla. Nearly every dollar that goes into the team goes right back out for development and building the team. Dixon hopes the team can expand to include a reserve squad, ten or more players who train with the older players and play in exhibition games to develop their skills.

The Mississippi Brilla began the 2012 season against the Ocala Stampede May 12, and has eight home games in a season that goes until the middle of July. It was a rough start as the Brilla lost its first three games, falling 1-0 in the U.S. Open Cup, dropping the home opener 1-0 to the Ocala Stampede and losing 2-0 on the road to the IMG Branenton Academics. Since then, however, the Brilla have put together a two-game winning streak, beating the FC Jax Destroyers 6-2 and 3-2.

Brilla season tickets are $30; single match tickets are $5, and kids 6 and younger are free. Visit http://www.msbrillafc.org for tickets, a game schedule and camp info, or contact the Brilla office at 601-924-3475.