Pardons: ‘The Coward's Way Out' 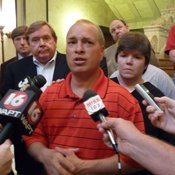 David Gatlin drove nine hours from Macon, Ga., to kill his wife in 1993. Tammy Ellis Gatlin had left him when she was a few months pregnant. David couldn't or wouldn't find work, and the couple was living out of their car. David was abusing Tammy, her sister Tiffany Ellis Brewer told the Jackson Free Press Monday.

David showed up in Rankin County when their son was 6 weeks old.

"He had to look for us, hunt us," said Randy Walker, Tammy's childhood friend.

Walker was in Tammy's trailer when David showed up. He opened fire on them both, killing Tammy as she held their infant son in her arms.

"The picture that remains in my mind to this day, whenever I think of Tammy, is that he left a 6-week-old baby lying on top of his mother--that's his kid," Walker said.

David Gatlin also shot Walker in the head. When Walker came to about 25 minutes after the shooting, Walker didn't remember being shot. He stumbled across the street to a neighbor's house, some 150 to 200 yards away, to get help after he realized David had destroyed the phones in the trailer. He remembered what happened as he pounded on the door.

"I remember bloody handprints on the glass and thinking, 'Oh God this guy's going to come out and shoot at me, too,'" Walker said. "And it was my bloody hands."

When he didn't get a response, Walker stumbled back to Tammy and her baby. He wasn't sure if David Gatlin was still around, but he managed to piece together a phone and call for help.

"I picked the baby up, wrapped him in a blanket and hid him in a closet," Walker said. He took the baby boy "off of his dead, bloody mother."

David Gatlin turned himself in to Brandon police soon after, telling them that he had killed two people. He didn't know Walker had survived. Given a life sentence for murder, the judge added years for aggravated assault and burglary. The Walkers and Ellises thought they'd never see him again.

Then, last Saturday, one day after the Mississippi Parole Board notified the families that it had denied David Gatlin's parole, they received notification that Gov. Haley Barbour bestowed a parting gift to the killer: a full pardon.

In 2008, after he pardoned another trusty working in his mansion (Michael Graham, who killed his ex-wife Adrienne Klasky in 1989), Barbour told the Associated Press that Mississippi governors had a tradition of pardoning convicts. Some Mississippians believe it's a tradition that has outlived its usefulness. The archaic ritual of governors pardoning killers who happen to be working in their mansions--providing freedom to convicts without any accountability whatsoever--is a tradition in dire need of updating.

"Traditions are not always good, " Walker said at a Jan. 9 press conference.

He was joined by State House Minority Leader Bobby Moak, D-Bogue Chitto, and Rep. David Baria, D-Bay St. Louis, who stood with the family and friends of Tammy Gatlin under the dome of the Mississippi Capitol. Moak and Baria announced legislation to add accountability to the governor's process of pardons.

"We worked to craft a piece of legislation, not to take away the governor's power to pardon someone, just to ensure that the law-enforcement authorities, the district attorney and the sheriff in the county where the incident occurred, and the (victims') family had information beforehand that the person might be pardoned, and that there was an opportunity for the community to be heard and to voice their objections," Baria said of last year's bill. That legislation, sponsored by former Rep. Brandon Jones, D-Pascagoula, died in committee. Baria said that this year's legislation is virtually identical.

The family was circumspect when speaking of Barbour, despite their obvious distress over David Gatlin's release. But it was clear they were upset.

"I don't think he cares," said Tiffany Ellis Brewer, who added that she hoped Barbour didn't know the facts of the case because she couldn't imagine him pardoning David Gatlin if he knew them. "I would like to think a Christian human being would never have done this to a family--two families--that have been through so much."

Walker said that he wants the new governor, Phil Bryant, to break the mold of tradition. "The governor himself ought to have to look me and the family in the eye and say, 'Hey, I'm going to let this guy go.' But there wasn't any of that," he said. "That's the coward's way out if you ask me."

Trustys are convicted criminals who get assigned to work in the governor's mansion based on recommendations from the parole board, prison officials and their families. Prisoners are scored on numerous facets, including their crime, the sentence and the number of years served. Typical tasks for trustys may include working in the kitchen or serving food and washing the governor's vehicles, said Christopher Epps, commissioner of the Mississippi Department of Corrections.

Based on information the JFP gleaned Tuesday morning, Barbour also pardoned the following men this past weekend in addition to David Gatlin, all of whom worked in the governor's mansion as trustys:

• Anthony McCray, sentenced to life for murder in 2001 for shooting his wife, Jennifer, in the back.
• Charles Hooker, a middle-school teacher convicted in 1993 of murdering his school's principal, Walter Johnson.
• Joseph Ozment, convicted in 1993 of murder, conspiracy and armed robbery in the killing of Ricky Montgomery.
• Nathan Kern, who was serving a life sentence for burglary and robbery.

In 2008, Barbour pardoned the following trustys:

Also in 2008, Barbour indefinitely suspended the sentence of trusty Michael Graham, who stalked his ex-wife Adrienne Klasky, finally shot-gunning her to death in broad daylight in 1989.

In his final days as governor of Mississippi, Haley Barbour ordered more than 200 pardons, including the following individuals who were convicted of murder and accessory to murder after the fact. The list also includes several trustys who worked in the governor's mansion, pardoned in 2008.

my condolences to all concerned. It would be nice to know how or who decided which inmates were chosen to be pardoned or released. is there a process by which they are chosen? OR how does one go about getting a job at the Gov Mansion? It was my understanding violent offenders cannot have jobs outside the wire/fence of a correction facility? I believe there are many inmates that need a second chance and deserve a second chance. but that second chance should be available to all. Thanx!

I'd like to know how many of the pardoned trustys are ethnically white or African-American. Most of the trustys I see working at the governor's mansion are white.