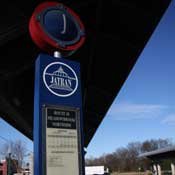 JATRAN has proposed shortening some bus routes in an effort to cut costs.

Jackson's bus service could face cuts to deal with a tight budget and low ridership. JATRAN has proposed shortening some bus routes and combining others in areas with few riders.

One of the proposed changes would combine Route 3, which runs between downtown and Lake Hico, and Route 6, which runs between John R. Lynch Street and Northside Drive. Another would reduce service along Route 7 near Terry Road to midday only. Route 5, which travels to the Jackson Medical Mall, would not run during the midday period, and Route 4 in the Belhaven neighborhood would be adjusted to provide service to the Medical Mall during that time. Other changes would include reducing the number of buses in certain areas or shortening routes.

In December, Mayor Harvey Johnson Jr. proposed cutting bus routes and laying off drivers to fund back-pay and other costs to JATRAN employees. The city reached an agreement with Amalgamated Transit Union, the bus workers' union, that required the city to pay $984,000 in back wages and $560,000 more per year in raises.

One proposal called for eliminating 21 jobs, cutting Saturday service and slashing under-used routes. Another would have eliminated nine jobs and kept the Saturday routes. The City Council Planning Committee did not pass either of those proposals.

The newest proposal drew anger from some at a public hearing Aug. 30, but relief from others who said the cuts are much less drastic than those proposed in December.

Sheila Adams, who rides the bus regularly, said the city should be adding buses and hours instead of reducing them. She worried that fewer buses on the roads will lead to people missing connections. "Won't nothing connect up downtown on time," she insisted. Others said the route changes will lead to overcrowding on some buses and long wait times.

Ward 2 Councilman Chokwe Lumumba is chairman of the Special Committee on JATRAN. He said he still has questions about the proposals, such as whether the new routes will be able to run on time and whether JATRAN will review the routes every six months to check for problems.

Despite the questions, Lumumba told people at the hearing that "we're going to make JATRAN work."

Lumumba told the Jackson Free Press that the plan needs a lot more work, but most of his committee does not feel that improvements can be made between now and Sept. 8, when the council will vote on the budget.

Scott Crawford is the chairman of the Handi-Lift Advisory Committee, which meets monthly to deal with service and policy issues regarding JATRAN's wheelchair-lift service. He is also a regular attendee at other JATRAN committee meetings.

"(This plan) is a far cry from what we were dealing with last December," Crawford said. "... I back this proposal as the best of all possible outcomes."

Ward 6 Councilman Tony Yarber also said JATRAN's plan was an improvement over the December plan. "JATRAN has been on life support for quite some time," he said. "... Now, I think this crisis has gotten our attention."

Yarber added that it is no secret that JATRAN is flawed, but the city has to figure out how to make it work as well as possible. "I am nowhere close to being satisfied, but I understand the process of change," he said.

Sarah Asmus rides the bus from south Jackson to her job downtown every day, as she has for more than three years. She said JATRAN needs to "look into the future so we don't have to have this conversation every year."

Asmus suggested better marketing campaigns to make the benefits of JATRAN clear as well as better maps and websites so those who are not regular riders can understand them. She also suggested extending hours in the evening, so people dependent on the bus for transportation can visit businesses downtown later.

The council still has to vote JATRAN's budget before the proposed changes take effect. Dewayne Cheatham, director of operations at JATRAN, did not return requests for comment.