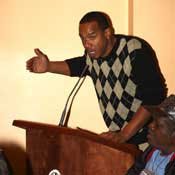 Jackson resident Kin Palmer, who depends on JATRAN for transportation, predicted that cutting bus routes will lead to an increase in crime.

Kin Palmer staggered out of Jackson City Hall the evening of Dec. 20 visibly angry and frustrated as he joined other JATRAN riders to load the city buses that had transported them to a public hearing regarding cuts to the city's bus system. He balled up his fist as he predicted what would happen when city residents could not get to work anymore.

Ward 2 Chokwe Lumumba says that the city's proposal to cut JATRAN routes and layoff drivers is retaliation over a $1.5 collective-bargaining agreement the Amalgamated Transit Union won in October.

"The only reason this is being proposed is because the workers were successful in wining their challenge to the city," Lumumba said after the Dec. 20 public hearing "... I come from a working-class family. The only reason workers have anything in this country is because they fought for it. They were punished for collective bargaining. I think everyone on the City Council should be opposing it."

Mayor Harvey Johnson Jr. informed Jackson City Council members in November that the city will have to shell out $984,000 in back pay, vacation and other costs in January, and include an extra $560,000 in next year's city budget to fund wage increases for the city's 49 unionized bus drivers and 14 maintenance employees. The mayor added that the $560,000 represents a recurring annual 3-percent increase in wages that may increase as the cost-of-living dictates.

For the past few years, the city has questioned the sustainability of JATRAN. Last January, the city unveiled 16 new JATRAN buses, costing $4 million, financed primarily through federal grants. The upgrades came only after Council members approved a consent decree with the U.S. Department of Justice after advocates for the disabled—including the Mississippi Coalition for Citizens with Disabilities, and the Mississippi Council for the Blind—sued the city in 2008 for failing to provide buses with operative lifts, denying transit trips to the disabled and failing to adequately train staff members on dealing with disabled passengers, among other complaints.

The consent decree required the city pay up to $139,000 over the next three years to finance an Americans with Disabilities Act coordinator, who will monitor the JATRAN system for disability compliance. During that time, JATRAN Operations Planner Arthur Gaudet told the Council that it would have to make tough decisions in the future regarding financing the bus system.

Lumumba criticized the administration for not planning for its financial woes better. He suggested the city tap its reserve fund to offset the $1.5 million in fees. He also recommended that the city offer service to the surrounding suburbs to increase ridership, or use the buses to transport Jackson Public Schools students who could use vouchers to ride them.

City spokesman Chris Mims said dipping into the reserve fund would not be a long-term solution to make JATRAN sustainable.

"About $600,000 of this—at least—is going to be money that has to be carried forward in upcoming years budgets," Mims said. "If we were able to take money from the reserve funds to offset it this year, that money would not necessarily be there in the reserve fund in the year coming up."

Ward 1 Councilman Jeff Weill has advocated in the past to cut the bus system because more taxpayers finance the bus system than those who use the service. The Dec. 28 council meeting will be the last meeting for Weill, and on Tuesday morning, he was still undecided about his vote. The majority of cut routes are in Weill's ward, and he said he would like to see consolidation of services rather than cutting routes altogether.

"The cuts seem haphazard and concentrated in northeast Jackson. I am concerned about that," he said.

On Tuesday afternoon, JATRAN employees offered suggestions for additional amendments to the proposal during the city's planning committee meeting in a last-minute attempt to work out a comprise with infuriated JATRAN riders and bus drivers.

The City Council did not vote on the issue Tuesday.

How long will Jackson continue to pump money into Jatran? It is such a waste of funds. I agree, public transportation is a vital service which Jacksonians should be afforded. I disagree that an over-staffed, overpaid and underworked unionized labor force is the best way to achieve this task. When the project went out to bid a few years ago, local transportation agencies passed on bidding due to the mess they saw during their pre-bid research. The award was granted to an agency from (Texas I think). Recently, several states have begun to utilize subsidized, shared-ride taxi programs to provide on-demand rather than fixed route services to community citizens. Sure, it will cost money, but will it cost as much as Jatran--I think not. Additionally, ADA paratransit vehicles could supplement the ambulatory fleets at little additional cost to Jackson taxpayers.