DOJ Weighs in on JATRAN 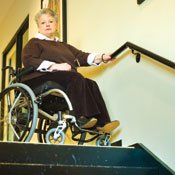 The U.S. Department of Justice has intervened in a lawsuit filed in U.S. District Court in Jackson, buttressing accusations of the inaccessibility of Jackson's public bus system.

Eleven Jackson residents with disabilities and two non-profit organizations filed the lawsuit late last year. They allege the city is violating the Americans with Disabilities Act and the Rehabilitation Act of 1973.

The Justice Department, like the plaintiffs, say Jackson has failed to maintain wheelchair lifts on buses, and has not adequately trained personnel to properly assist passengers with disabilities. The city, according to the DOJ, failed "to provide paratransit services to individuals with disabilities" and failed to "schedule and provide paratransit service" to eligible people and failed "to plan to meet paratransit demands" in violation of federal law.

Mary Troupe, director of the Mississippi Coalition for Citizens, said the city had neglected to provide the federally required level of service to passengers for years: "We get calls all the time on where to catch a bus and where handicap-accessible buses go. We don't have any accessible taxi-cabs. If someone doesn't know someone with an accessible van, they're mostly out of luck."

The city offers curbside Handilift service, although Troupe said residents must prove both residency and impairment with a doctor's letter, severely restricting the use.
"If you're flying in from another city for a conference, you're in trouble unless you know somebody," Troupe said. "People have to call us to find out how to get into Jackson to see the city's exhibits. A major national group had to call us once to find transportation for their group. The city couldn't help them. It's deplorable that our capital city, with everything going on in it and the convention center, that we do not have a reliable, safe transportation system."

City attorneys did not return calls.

The council voted earlier this month to approve a $1.2 budget transfer to the city's bus service, saving JATRAN from financially running dry in July. The council plans to fund the transfer with insurance savings and closed city employee positions.

Ward 1 Councilman Jeff Weill said he worried how the city was going to finance the bus upgrades should the city lose the court battle. "I'm concerned with how we're not only going to pay for it, but even keep JATRAN afloat. We already borrowed $800,000 from the city's health insurance budget. If we have that kind of spare change laying around I can think of other places that it needs to go," Weill said.

Plaintiff Scott Crawford argues that federal funding is available to the city for municipal bus systems, although Weill said federal grant money, so far, has only been available to purchase huge buses that are not cost-effective for the city.

"The federal grant money doesn't pay salaries and gas. That's the city that has to pay for that."

I am trying to not be critical to only be critical, but damn, what a joke. If the city is going to have a public transit system why not bother to do it correctly? Is it really that hard? Who is running Jatran? And is there any kind of plan for actually trying to run it effectively? We got people suing the city because they can't get on the bus and councilmen worrying about how they can stay afloat. Well... how about providing a service that people can use and access? How about servicing the whole metro area instead of just Jackson? You know, routes that serve places people actually want or need to go to and from. How about park and rides? Bus shelters and sidewalks? How about promoting the service and actually trying to make it easy for people to use? It just seems like we are in the bus business to be in the bus business and there was no thought beyond that.