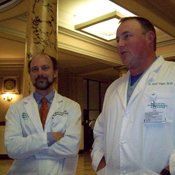 Dr. Paul Seago finds it absurd that if Initiative 26 passes this November, a carcinoma could have the same rights as his teenage daughter.

Seago, who practices gynecologic oncology in Jackson, spoke at a news conference yesterday at the Capitol. He and Dr. Randall Hines, a reproductive medicine and infertility clinic physician based in Flowood, represented the group Mississippi Doctors Against 26.

They called Initiative 26 a law of unintended consequences.

"Whether intended or not, we as doctors will have to deal with these consequences," Seago said. "This initiative is bad for the practice of medicine, bad for women's health and bad for Mississippi families."

Seago said that the measure could eliminate common birth-control options, including the pill and IUDs. Supporters of the measure have said otherwise, suggesting an emotional overreaction from their political opponents. The doctors said identifying the moment of fertilization is not so simple.

"We have no test to know exactly when this happens," Seago said. "We also know that more than 40 percent of the time, the fertilized egg will fail to develop past this early stage even in optimal circumstances."

If the initiative passes, women and families would face drastic consequences, the doctors said. Hines said in vitro options for infertile couples would be illegal. He finds many other flaws in the initiative.

"Mississippians face some of the worst health outcomes in the nation," Hines said. "Health-care teams with best practices should decide what is best, not politicians and lawyers."

He gave the example of a pregnancy occurring in the Fallopian tubes or an ectopic pregnancy. Initiative 26, if passed, would protect these fertilized eggs outside the uterus that endanger the life of the mother.

"Most people know somebody who has had an ectopic pregnancy," Hines said. "It's one of the most intrusive ways government can intrude in health care. You don't want your doctor worried about the law."

Seago said his understanding was if Initiative 26 passes in November, it goes into effect 30 days later. He described a scenario of a woman with an ectopic pregnancy walking into an emergency room Dec. 15. "What happens that night?"
If personhood became law, malpractice premiums would rise for Mississippi doctors. Doctors could face criminal charges for providing the best care for individual patients.

Hines brought up other concerns, such as the legal trouble a pregnant mother drinking coffee might face. Seago said the word "person" appears in state statutes about 4,000 times and all those laws would take on new levels of interpretation.

Seago said his 15-year-old daughter's eyes got big when another doctor explained to her the ballot initiative had no exclusion for rape or incest.

"You should have seen her eyes," he said.

I love the fact that "anchor babies" would no longer have to be born in Mississippi, just conceived here.