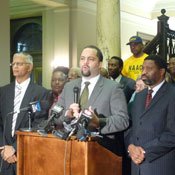 After languishing in obscurity for 16 years, the story of imprisoned sisters Jamie and Gladys Scott received its 15 minutes on the national stage last week after Gov. Haley Barbour ordered their life sentences indefinitely suspended.

In a Dec. 30 press release, Barbour announced his decision to suspend the sentences, effectively granting the Scott sisters parole for the 1993 armed robbery they allegedly masterminded.

As news of the sisters' release spread, speculation focused on the timing of Barbour's announcement. Did Barbour hope the news would dispel memory of the recent outcry over comments he made praising the all-white Citizens Councils?

While Barbour is universally acknowledged as a savvy political animal, his involvement in the sisters' case predates the flap over his remarks by months. The governor sent investigators to interview the sisters in prison in September, one week after supporters submitted the pardon petition and held a rally outside the state Capitol.

Advocates for the sisters were already expecting a decision on the petition by the end of the year. On Nov. 24, after delivering an NAACP petition in support of the Scott sisters to Barbour's office, the sisters' attorney, Ward 2 Councilman Chokwe Lumumba, told the Jackson Free Press he expected the governor to render a decision soon.

"It appears that the government—the governor and the Parole Board—have taken some affirmative steps to at least investigate our position," Lumumba said. "We expect an answer in the near future. ... We've heard that the Parole Board would deal with their recommendation by the end of the year."

National NAACP President Ben Jealous said that, despite the timing of Barbour's announcement, he believed the controversy did not affect the governor's decision.

"What I know is that it didn't affect his level of interest in the case," Jealous said. "The fact that the governor got engaged right away—and his office and my office were going back and forth for months, setting up this meeting, going through the facts—tells me that he was going to do this regardless."

Reporting also focused on the governor's stipulation, in his announcement of the suspension order, that Gladys' release was dependent on her donating a kidney to Jamie, who suffers from total kidney failure.

In the hands of national media outlets, this requirement became a macabre extortion: paying an organ for one's freedom.

The governor had only his own press release to blame for these headlines, but it was also clear, almost immediately, that he wasn't planning to hold Gladys Scott ransom for one of her kidneys.

While lab tests have confirmed that Gladys' blood type matches her sister's, further tests are necessary to confirm that she can actually serve as a kidney donor. At a hastily assembled press conference hours after Barbour's initial announcement, Lumumba said he expects Gladys to remain free, even if she is unable to donate her kidney.

The next morning, Barbour spokesman Dan Turner was somewhat less direct but ultimately confirmed that Gladys Scott could remain free on a suspended sentence, even if tests find she is not a suitable donor.

Her release from prison is not solely dependent on her donating a kidney, Turner told the Jackson Free Press.

"I think there would be some other factors involved," Turner said. "Is she living within the law? That's going to be the first prerequisite for her remaining free."

In a further indication that Barbour does not plan to revoke Gladys' suspended sentence, Turner added that any later decision on her release "may be up to the next administration as well." Barbour's second term as governor ends in December.

Turner also pointed out that Gladys offered the donation in the petition for pardon filed Sept. 14 on their behalf.

"This is not something that the governor's office came up with," Turner said. "With that offer, they placed that in the conditions of the parole."

The sisters' pardon petition stated that Gladys Scott has volunteered to donate a kidney, but it argued for their release on grounds that their life sentences—for a 1993 armed robbery—were excessive. The sisters' three alleged co-conspirators all served less than four years in prison.

The media frenzy that followed Barbour's statement also allowed inaccuracies about the sisters' case to spread.

USA Today and Slate both overstated the duration of the NAACP's involvement in the case. In a Dec. 30 post on USA Today's website, Catalina Camia said that Scott sisters case "had long been championed by the NAACP," while Slate's Dave Weigel called it a cause "the NAACP had publicized for years."

In fact, the NAACP, like most other national advocacy groups and media outlets—the Jackson Free Press included—only directed attention to the sisters in 2010, after Jamie was diagnosed with kidney failure. For years, publicity for the sisters' plight has mostly been limited to the activist blogosphere and black media outlets.

National reporting has also codified the claim by advocates that the 1993 robbery for which the sisters were convicted only netted $11. Court records do not provide an official figure for the robbery's take: the sisters' indictment only mentions a robbery of more than $10, while trial testimony put the figure anywhere from $11 to more than $200.

Turner said that the state has made no commitment to pay for a kidney transplant procedure and that funds would likely come from Medicare. At a press conference Dec. 30 at the Capitol, Jealous said his organization will continue to support the sisters as they re-enter society.

"We will stick with them," Jealous said. "Now we're focused on ensuring that they get the health care they need and that they can back to rebuilding their lives."