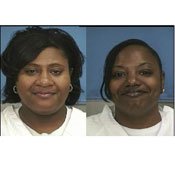 Gov. Haley Barbour has issued orders for the release of Jamie and Gladys Scott, sisters serving life sentences for a 1993 armed robbery. Barbour granted the Scott sisters an indefinite suspension of their sentences, which is "tantamount to parole," he said in a statement posted on his website this afternoon.

A large movement of civil-rights advocates and online activists has lobbied for the sisters' release, arguing that their sentences are disproportionately severe for an armed robbery that allegedly netted as little as $11. The sisters have spent 16 years in prison, and Jamie Scott is currently suffering from total kidney failure.

Reached by phone en route to the grocery store, the Scott sisters' mother, Evelyn Rasco, had to pull her car over upon hearing news of Barbour's order.

"Oh my God. You're kidding me," Rasco said. "Oh, please--oh my God." Rasco said that she had not been informed of the governor's decision but had plans to listen to Charles Evers' radio show this evening, on which Barbour is scheduled to appear as a guest.

Nancy Lockhart, a South Carolina-based activist who has worked with Rasco since 2005 to publicize the sisters' case, said that she looked forward to meeting the women she has only known through letters and phone calls.

"I am elated," Lockhart said. "I would like to thank Governor Barbour, and I can't wait to meet to meet Jamie and Gladys."

Ward 2 Councilman and attorney Chokwe Lumumba, who filed a petition for pardon in September, said that the sisters' release from prison is "imminent" and would take place within the next seven days. The sisters plan to live with relatives in Florida following their release, Lumumba said.

Gladys Scott offered in the pardon petition to donate a kidney to her sister, and Barbour made the donation a stipulation of her release. The state has made no commitment to pay for any medical procedures related to a kidney transplant, Lumumba said. Doctors still need to test Gladys Scott's compatibility as an organ donor, but Lumumba expects her release to stand whether or not she is a suitable match.

While commending Barbour's decision, he added that a coalition of activists and advocacy groups would continue to press for a full pardon.

"This is not the end of our journey," Lumumba said.

"Today, I have issued two orders indefinitely suspending the sentences of Jamie and Gladys Scott. In 1994, a Scott County jury convicted the sisters of armed robbery and imposed two life sentences for the crime. Their convictions and their sentences were affirmed by the Mississippi Court of Appeals in 1996.

"To date, the sisters have served 16 years of their sentences and are eligible for parole in 2014. Jamie Scott requires regular dialysis, and her sister has offered to donate one of her kidneys to her. The Mississippi Department of Corrections believes the sisters no longer pose a threat to society. Their incarceration is no longer necessary for public safety or rehabilitation, and Jamie Scott's medical condition creates a substantial cost to the State of Mississippi.

"The Mississippi Parole Board reviewed the sisters' request for a pardon and recommended that I neither pardon them, nor commute their sentence. At my request, the Parole Board subsequently reviewed whether the sisters should be granted an indefinite suspension of sentence, which is tantamount to parole, and have concurred with my decision to suspend their sentences indefinitely.

"Gladys Scott's release is conditioned on her donating one of her kidneys to her sister, a procedure which should be scheduled with urgency. The release date for Jamie and Gladys Scott is a matter for the Department of Corrections.

"I would like to thank Representative George Flaggs, Senator John Horne, Senator Willie Simmons, and Representative Credell Calhoun for their leadership on this issue. These legislators, along with former Mayor Charles Evers, have been in regular contact with me and my staff while the sisters' petition has been under review."

The question remains why is Jamie Scott suffering from total kidney failure. She is been in state custody for 16 years. Lack of proper medical care again?

I know I'm supposed to be happy with their release - but I'm not as grateful as many have shown last night on the news! First and formost to house these two ladies for the last 16 years has done more damage than it has done good for the citizenry of this state. The punishment was excessive and ridiculous. Granted it was arm robbery, but the women did not have any prior known convictions and it was alleged some other people were arrested for the crime. These kind of sentences have kept real criminals out of prison and kept people that could have been rehabilitated and productive citizens in prison. Now there are still stipulations to their release, when they should have been pardoned free and clear and kept it moving!? When will these legislators learn that these kinds of sentences do more damage to tax payers than the quote un-qoute so called criminals!? Just imagine how much could have been conrtibuted to the poor education system, roads and bridges, just off what was spent on the Scott Sisters, @ $30,000 an offender per year @ 16 years = $960,000, over $11!? That gets an official yes indeed!

What a coincidence that the governor had such a change of heart about the Scott sisters so soon after his unfortunate comments about the racial tolerance of the White Citizens Council in the Yazoo City of his youth. That's not the way I remember it!! Up to that point he had apparently been unmoved by the excess of the sentences they had been given or the health of either of them. Of course that is exactly what one should expect of him. It's all about him and his base-the wealthy.

Jade, to be fair, Barbour was already working on this, and we're told it was likely to happen regardless of his disgusting Citizens Council remarks. Also, mother Evelyn Rasco was on The Today Show this morning, and mentioned that Ward first told her. She also had great remarks about the innocent people in prison in Mississippi and how people aren't getting enough medical care. We need to build on this momentum to raise more awareness about the mess that we call a criminal "justice" system in Mississippi.

Before we outfit ol' Haley for a halo, a few annoying facts: The sisters were given life sentences for a crime committed when they were teens in which they lured a car into a spot where a group of boys they knew held them up at gunpoint. The sisters did not use any weapons themselves and there were no serious physical injuries. Both sisters got life sentences but the boys all got less than a year. The dialysis that the one sister is getting in prison is costing THE STATE a fortune. By releasing them, or at least releasing the sick one, Barbour is saving the State a fortune, throwing this woman's medical problems on the Federal system. As a matter of fact, I think (but am not sure) that the State is NOT picking up the tab for the transplant medical procedures.

At least he has released Jamie before something serious happened to her. allegations of lack of medical care seem to be the norm. I can't say he was as compassionate for an end stage alzheimer's patient and her male caretaker in the days following Katrina. He still will have to answer for his involvement with his FEMA division and explain why the male caretaker was blocked and the federal documents were falsified in an effort to cover it up. She died. Follow the case on Facebook as all the facts are exposed. http://www.facebook.com/pages/DeGuyz-in-Mississippi/163118500388873?v=wall

Haley Barbour's stipulation of Gladys donating one of her kidneys to her sister, Jamie as one of the terms for their release is inhumane. These two women were teenagers when they were charged with these crimes. (Nobody cut, bruised, or murdered - No drugs, stolen goods or drug paraphernalia - No sexual abuse of younger children - Just ELEVEN DOLLARS ($11.00). Why is it that young blacks are never tried in this state as adolescents? We are almost always thrown into adult courts unless the parents have money or know someone in the system who can speak up and out in ways that can make a difference. Can anyone say, "Bubba MAY?"

There punishment should not be calibrated according to the amount of money on the victims who were pistol-whipped, nor, necessarily, on their age, in light of the nature of the crime. But a life sentence where the victims were not seriously harmed and only money was taken pretty much eliminates future criminals' inclination to leave a living witness. More significantly, the boys who actually had the weapons got off very lightly. There are probably crowds of people (and I wouldn't be surprised if all or most were black) in Mississippi prisons serving life or near-life sentences under analogous situations. Barbour is not releasing these sisters out of any sense of outraged justice or even out of compassion. He simply wants to save the state the very considerable expense of this woman's dialysis therapy. He only requires that they apply for a transplant, not even that they go through with it -- and since he's not picking up the tab for the transplant, once their medical bills are no longer his problem, I am sure he doesn't care what happens to either of them. Perhaps a lesson to be learned: Prisons, at least in Mississippi, might let you out if you are so sick that you're helpless but you're running up a big medical bill. Guilt or innocence has nothing to do with it.

My point was that Haley would release the women under any conditions only if there was something in it for him. I would expect him to make it as difficult for them as possible. But as I understand it they were not a match so that will not be an issue. I think we all know why blacks are treated differently than whites.in this state and it is.time it stopped . Racial animus has poisoned us for far too long. But try telling that to the Bubbas.