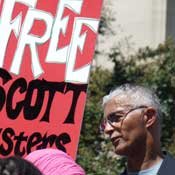 Support for imprisoned sisters Jamie and Gladys Scott is growing as an anticipated deadline for their clemency petition nears. The sisters, who are in the 17th year of their double life sentences for armed robbery, have a petition for clemency or pardon pending before Gov. Haley Barbour.

Attorney and Jackson Councilman Chokwe Lumumba, who previously handled the sisters' appeals, filed a petition for clemency or pardon with Barbour Sept. 14. Since then, the NAACP, as well as other national civil-rights organizations--including a coalition of Mississippi Freedom Riders--have joined the call for their release.

On Nov. 24, Lumumba delivered to Barbour's office a stack of papers bearing the names of 24,000 people who signed an online petition for their release issued by the NAACP. He also carried another 1,500 letters of support that he received personally at his law office.

Among the new crop of supporters was Hinds County District Attorney Robert Shuler Smith, who reviewed the sisters' case and pledged his support in a separate letter.

"The Scott sisters do not have a previous criminal history, which is at least a hint that they were most likely law-abiding citizens for most of their adult life," Smith wrote. "Consequently, they do not have the profile of those who exhibit predatory behavior or aggressive conduct towards criminality."

Jamie and Gladys are serving life sentences for allegedly masterminding a 1993 armed robbery, when they were 21 and 19, respectively. Estimates of the amount allegedly stolen range from $11 to a little more than $200.

Read the JFP cover story, "The Tragic Case of the Scott Sisters.".
The sisters have maintained their innocence, as have many of their supporters, but the pardon petition and recent groundswell of support have focused on the severity of their sentence.

Two of the sisters' three alleged co-conspirators received reduced sentences in return for testifying against them. Within three years of their sentencing, all three of the co-conspirators were released from prison.

Lumumba said that he has been in communication with Barbour's attorney, Lucien Smith, and that he expects a decision on the pardon request soon.

"It appears that the government--the governor and the Parole Board--have taken some affirmative steps to at least investigate our position," Lumumba said. "We expect an answer in the near future."

Investigators from the state Parole Board have spoken with the sisters at the Central Mississippi Correctional Facility at least three times, according to Nancy Lockhart, an activist who is in regular phone contact with the Scotts. Lumumba said that he has also discussed the case with investigators, and he believes the governor has enlisted the help of the Parole Board to investigate the case and deliver a recommendation on the pardon request.

"We've heard that the Parole Board would deal with their recommendation by the end of the year," he said.

State law does not require Barbour to seek a recommendation from the Parole Board, however. This past winter, a bill that would have required the Parole Board to make a non-binding recommendation in advance of any gubernatorial pardon died in the state Legislature. Rep. Brandon C. Jones, D-Pascagoula, authored the bill in response to Barbour's controversial pardons of five murderers who worked in the governor's mansion as trustys, four of them for domestic murders, as revealed by the Jackson Free Press in 2008. The House of Representatives passed the bill by a 115-5 vote, but the measure died in the Senate.

Support for the sisters' release has grown dramatically this year, spurred in large part by the urgency of Jamie Scott's health problems. In January, doctors diagnosed her with kidney failure, a result of untreated diabetes. Since then, prison staff has periodically rushed her to the hospital because of infections and other complications.

Jamie is currently suffering from severe headaches and blurry vision, Lockhart says, another side effect of her diabetes. Lockhart has asked prison staff to prescribe Jamie glasses, but she has yet to receive them.

The time should fit the crime, everything about this story reaks with whats wrong with the current prison system in Mississippi. The wrong people are locked up, the type of sentence they were issued is ridiculous, their psychological profile was not taken into consideration, the list goes on and on. It's costing tax-payers more to house these two innocent, non-violent offenders than anything else. But, fiscal conservatives are screaming about budgets and spending. It would almost be funny, if it weren't so cynical!