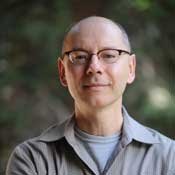 Peppy Biddy is the director of "39 Steps," at New Stage Theatre through Feb. 6.

When actors auditioned for a role in New Stage Theatre's "39 Steps," director Peppy Biddy warned them that the play would be like running on a treadmill at its highest speed for two hours.

The play, based on Alfred Hitchcock's 1935 film of the same name, is a comedy and mystery featuring four actors who play 20 different roles.

"39 Steps," which runs at New Stage through Feb. 6, follows the mysterious murder of a woman who claimed she was a spy. After her death, an organization called "The 39 Steps" goes on a manhunt to investigate the murder. The colorful and fast-paced play often surprises audiences who might expect a traditional Hitchcock plot, Biddy says.

The Columbus, Miss., native has spent the majority of his life in the performing arts. He earned his bachelor's degree in theater from Ole Miss and his master's degree in fine arts from Trinity University in San Antonio, Texas. Biddy, 51, directed New Stage's "Gutenberg! The Musical!" in 2009, and played the role of Robert in "Boeing, Boeing" last spring. For the past 19 years, he has served as chairman of the Mississippi University for Women's music and theater department.

Biddy says he enjoys directing any production where he gets to laugh for two hours.

"In general I enjoy laughing more than not laughing," Biddy says. "Somehow I always get paired with those (types of productions)."