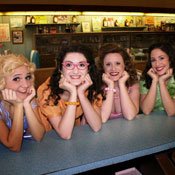 Love is at the heart of New Stage Theatre's production of "The Marvelous Wonderettes"--love of music, love of friends past and present, and the enduring love affair we have with popular songs. The pop song, with its familiar, catchy tune and lyrics that convey the most relatable emotions, is the driving force behind New Stage Theatre's "The Marvelous Wonderettes." The two-act, musical comedy includes classic '50s and '60s songs such as "Lollipop," "Dream Lover," "Stupid Cupid," "Lipstick on Your Collar," "It's My Party" and "It's in His Kiss (The Shoop Shoop Song)."

The first act of "The Marvelous Wonderettes" is set in 1958 at the Springfield High School prom where Betty Jean, Cindy Lou, Missy and Suzy greet the audience as fellow prom attendees and introduce themselves as The Wonderettes. From the moment the show opens, audience members will recognize the familiar high-school archetypes: the pretty girl, the nerdy girl, the flirty girl and the peppy girl. When the four-part harmony of "Mr. Sandman" begins, however, these girls show that they are more than just cliches--they can really sing.

Guest director Peppy Biddy returns to New Stage after directing last season's "The 39 Steps." Biddy is an award-winning educator and the current chairman of the Department of Music and Theatre at the Mississippi University for Women in Columbus. He has a master of fine arts degree from Trinity University in San Antonio, Texas, as well as acting, directing and stage manager credits at theaters such as Dallas Theatre Center, Casa Manana, Dallas Repertory Theatre, Dallas Children's Theatre, Theatre Three and Dallas Summer Music. "The Marvelous Wonderettes" is Biddy's 12th production at New Stage.

The four may reside in different cities, but they all hail from the same state of mind: the lively and versatile realm of musical theater. Like the characters they play, the talented women each bring something distinct to the songs and the show. Every voice stands alone in a wonderful and nuanced series of solos: Morello's sparkling, Broadway belt-out; Myer's sassy, sultry croon; Gavlin's wistful, sweet soprano; and Karcher's sincere, all-American alto.

When the time comes to sing in unison, their voices merge and harmonize beautifully. As though singing wasn't enough, "The Marvelous Wonderettes" is also fully choreographed. Look for some favorite dance steps including the "stroll" in Act I.

Act II of the show takes place 10 years later in 1968 at the Springfield High School 10-Year Reunion. The set is updated to reflect the colorful mod decor of the '60s era, and the Wonderettes return to sing more hits from the time, including choice Motown girl-group tunes.

The song list for the second act includes "Heatwave," "Wedding Bell Blues," "Leader of the Pack," "Son of a Preacher Man," "Rescue Me" and "Respect."

The band for the musical is made up of New Stage Music Director Harlan Zackery Jr. on piano, De'Ryan Brister on drums, Amber Jones on keyboard and Jimmy Turner on guitar.

With The Marvelous Wonderettes as your hostesses, the show promises to be a great evening of music, dance and laughs. An Actor Chat will immediately following the performances on May 30 and June 6.

"The Marvelous Wonderettes" opens May 30 and runs through June 10. Curtain times are Wednesdays through Saturdays at 7:30 p.m. and 2 p.m. Sundays. Tickets are $25 with discounts available for students, senior citizens and groups. Student Rush tickets, $8, are also available one hour prior to each performance with valid student identification. Call 601-948-3531 or visit newstagetheatre.com.