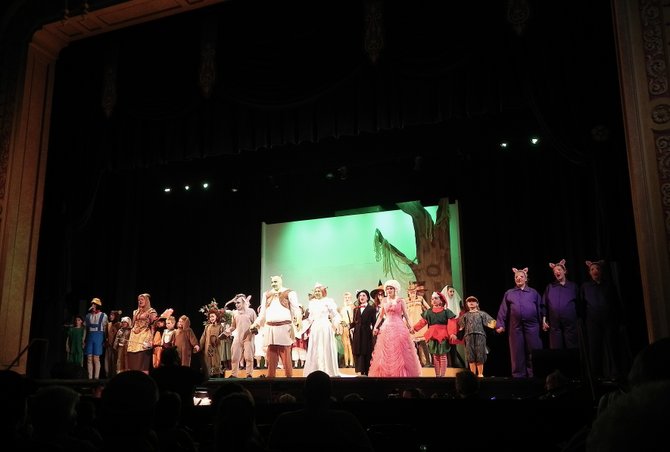 One of the most beloved animated characters of the last decade comes to life onstage in “Shrek the Musical” at New Stage Theatre.

Who could have predicted that when "Shrek" came out in 2001, the inverse fairy tale would captivate audiences so? The animated film spawned three more movies and, now, a theater spin-off is making its way around the country and to Jackson. New Stage Theatre will present "Shrek the Musical" this month. The musical, which Peppy Biddy directs, is based on the DreamWorks Animation movie (which, in turn, is based on artist William Steig's book). All the beloved characters from the first movie will be brought to life on stage, including Shrek, Donkey, Princess Fiona, Lord Farquaad and the Gingerbread Man.

Jason Marks is cast as the grumpy-but-lovable green ogre. Marks is a veteran actor from Richmond, Va. Raised in a musical and artistic family, he earned his BFA in musical theater and opera from the Shenandoah Conservatory. He's worked in New York, Oregon and Virginia. This is his second time playing Shrek on stage.

"I love being able to dive into a character that is larger than life," Marks says. "By nature I'm a very quiet, kind of shy person. Shrek has allowed me the chance to really show a different side of myself as a performer. I hope I bring a joy and vibrancy to the character, and I look forward to a new audience getting to experience what I've created."

The universal messages in "Shrek"—self-acceptance and loving others for who they are rather than their outwardly appearance—makes this show hit home for everyone, not just kids. The show will make you laugh and cry with burp and fart jokes, tender moments, big costumes, colorful sets and delightful music.

"Shrek is a very identifiable character with most people. Everybody can relate to feelings of isolation and rejection; the feelings this character has dealt with his whole life," Marks says. It's a very personal role for me, I strongly identify with this character. Shrek is a great joy, it's one of those stage roles that every actor should be so lucky to do."