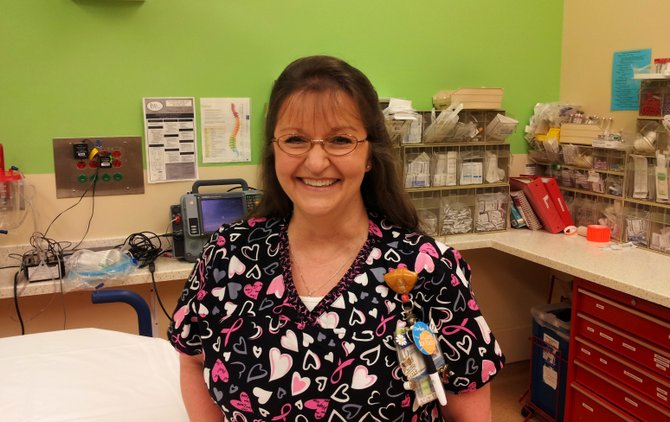 The dictionary defines a nurse as a person who is trained to care for sick or injured people and usually works in a hospital, doctor's office or a clinic. However, for anyone who has spent any time in the hospital, you know that a nurse is so much more. Your hospital stay is dramatically affected by the disposition of the nurse you have—one that is patient, kind, knowledgeable and compassionate makes all the difference.

One such nurse is Peggy "Denise" Adams, whom University of Mississippi Medical Center recently named Nurse of the Year. The hospital presented her with the 2014 Excellence in Nursing award May 7 at the Norman C. Nelson Student Union.

"I was shocked; it was a great honor," she says. "They give you a packet that includes everything that was submitted, and I was so touched by everything everyone said. It's a lot of work that goes into it."

Adams, 54, is an emergency-room nurse in the Blair E. Batson Hospital for Children who has been in the profession for 32 years.

"There are many things that have stayed with me," she says. "But what impacts me the most through nursing and throughout my career is that after I've taken care of someone, the child (looks) at me and (tells) me 'thank you' with a smile on their face. Or a parent, they hug your neck, and tell you 'thank you I really appreciate the care you've given my child.'"

Adams, a Magee native, attended the School of Nursing at UMMC and graduated in 1982. She immediately went to work at the hospital in the pediatric intensive care unit. After four years at UMMC, she relocated to Louisiana with her husband, Tom, where she worked in the PICU at Lafayette General Hospital for 10 years.

She returned to Jackson in 1995 and has been at Batson ever since.

"I've just always felt like my calling his children. I just love working with them," the nurse says.

Kesha Prystupa, her coworker and friend, nominated Adams for the award and refers to her as "Super Nurse." Prystupa, who has known Adams for 12 years, met her when Prystupa started working in the Pediatric Emergency Department at UMMC as a student nursing assistant. Prystupa says that the nomination packet for Adams was over 60 pages long.

Prystupa had this to say about Adams in her introductory letter to the committee:

"Denise's passion for nursing is evident through the caring and compassion she shows her patients, their families, and her co-workers. Upon graduation, I was fortunate to have Denise begin mentoring me as my preceptor. The knowledge and skills she has acquired in her 32 years of nursing is amazing, but what is more amazing is her ability to teach these skills and empower others to strive for excellence. To this day, every shift I work with her she never ceases to amaze me with the excellent care she provides to patients and families and the patience she shows, not only to patients and their families, but to her co-workers."

Michelle Burns, nursing workforce specialist for the Office of Nursing Excellence staff at UMMC, says that peers, co-workers or physicians can submit nominations for the Nurse of the Year. The nominators submit a portfolio with narrative and supportive documents about the nominee. "The Excellence in Nursing awards are considered our 'Grammy Awards' for nursing," Burns says.

A gentle and soft-spoken woman, Adams exudes kind-heartedness. In short, nursing is more than just a job to her, it's who she is.

"I do it because that's what I love doing, but knowing that it's made an impact on others, it's just touched me greatly," she says. "There are plenty of things that can negatively impact, but you just have to think of the positive because that's what keeps you going. The negative can bring you down real fast, but just the smiling faces and someone telling you thank you, that's enough to spur you on for the next time."

Adams is married and has one adult son, Thomas. She and her husband have traveled throughout the United States and have been on several cruises. They have an upcoming trip to Barbados planned. When she's not working, you can generally find her reading a book.