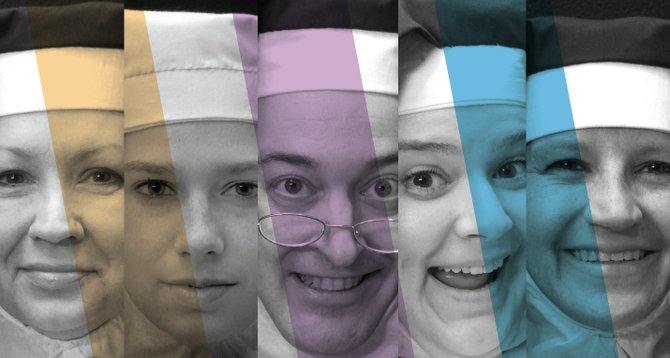 From Sally Field as the "Flying Nun" to Whoopi Goldberg in the "Sister Act" franchise, nuns hold a special place in our collective hearts.

Black Rose Theatre will tap into that place with its production of "Nunsense" this summer. The show, created by Dan Goggin, started off as a series of quirky tongue-and-cheek greeting cards that featured nuns doing silly things. After they became popular, Goggin wrote the two-act play, and it has been running since 1985.

The play takes place in New Jersey at the convent of the Little Sisters of Hoboken. After Sister Julia, Child of God, accidentally kills 52 residents of the convent with her tainted vichyssoise, the remaining sisters must find a way to bury the last four fallen nuns, being that the convent spent the last of its money on a new plasma TV. The sisters decide to stage a variety show at the Mount Saint Helen's School auditorium to raise the necessary funds.

The nuns involved in the fundraising show are an eclectic bunch. Reverend Mother Regina is a former circus performer; Sister Mary Hubert is the Mistress of Novices. Sister Robert Anne is a streetwise nun from Brooklyn; Sister Mary Leo is a wannabe ballerina and a newbie to the convent; and zany Sister Mary Amnesia lost her memory when a crucifix fell on her head.

"It's supposed to be an amateur production for the fundraiser, so that's what makes it really fun," says Tom Lestrade, the director of the play. "These are just regular nuns, as quirky as they are, trying to do good work with this fundraiser."

Lestrade started in community theater after graduating from Mississippi State University with a degree in electrical engineering. With his newfound passion, he attended a two-year program at the American Musical and Dramatic Academy. He then moved to the Jackson area in 1998, where he participates in all aspects of theater production, including acting, writing, directing and producing. Lestrade is also the owner of Mississippi Murder Mysteries.

"I saw a production of 'Nunsense' back in the earliest '90s when I lived down on the coast, and it had several very, very talented actresses that I worked with in other productions," he says.

"It was absolutely hilarious. Of course, I grew up Catholic so I was familiar with (that) angle of the show, but it's not at all intended for just a Catholic audience. I think everyone can appreciate the humor of nuns."

The show is done in a musical revue style and features whimsical songs such as "Nunsense Is Habit-Forming," "Just a Coupl'a Sisters" and "Holier Than Thou."

"It's got some great memorable songs, and it has different styles," Lestrade says. "There's some operatic, lots of comical stuff, a little country-music song and a few nice ballads. "It's a good mix of comedy and music. It's nothing very complicated; I'd say it's almost like a sitcom."

Black Rose Theatre (103 Black St.) in Brandon will present "Nunsense" June 5-7 and 12-14 at 7:30 p.m. and June 8 and 15 at 2 p.m. Tickets for all performances are $15 for adults and $10 for students, military and seniors. Season memberships for the rest of the season are still available. Reservations for the show are not required, but highly encouraged. For more information, visit blackrosetheatre.org or call 601-825-1293.