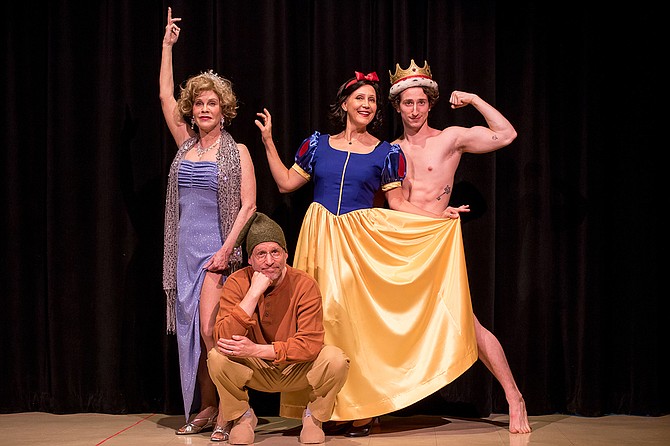 William "Peppy" Biddy says all he had to tell his family about the Christopher Durang play that he's directing to get a laugh out of them is, "It's the story of three siblings who are in their 50s."

Biddy, a Mississippi University for Women theater professor, is the guest director for New Stage Theatre's regional premiere of Durang's 2013 Tony Award-winning comedy "Vanya and Sonia and Masha and Spike," which opens April 18.

Of course, the characters in the play are quite different from Biddy and his siblings. But that didn't stop him from mentioning to his oldest sister that her corresponding character is a movie star. "We got a big laugh out of that," he says.

In a YouTube interview for the McCarter Theatre in New Jersey, where the play premiered in 2012, Durang said he borrowed themes and characters from the works of Russian playwright Anton Chekhov, including his 1897 play "Uncle Vanya," and put them into a blender as inspiration for the show.

In the New Stage production, David Cantor and Jo Ann Robinson play Vanya and Sonia, respectively, who have spent their entire lives at the family farmhouse, looking after their now-dead parents. Alyson Friedman plays the third sibling, Masha, a film star who has supported them. She returns with a young boy-toy named Spike, whom actor Noah Bridgestock plays, and has the notion of selling the house.

Adding some contemporary wedges into the Chekhovian family dynamic are a housekeeper prone to prophesy named Cassandra, whom Sharon Miles plays, and Nina, an aspiring young actress, whom Hope Prybylski plays.

Physical comedy, verbal sparring and inside jokes for the Chekhov-savvy are in the mix, but no Russian lit knowledge is required for amusement, Biddy says.

"Any good comedy works on multiple levels at the same time," he says. He describes Durang's humor as "always quick-witted, with a little sting to it. ... A little bit off the wall. This is one of his more contained ones."

The play isn't short on serious family themes, either. "We're all at a certain age, and we're all dealing with the idea of lost dreams, lost hopes, our own insecurities, and what's left? What's next?" Friedman says.

Bridgestock says that the play is about remembering your roots, where you come from, and honoring that.

In some ways, the play will be a bit removed from the roots of a few audience members. For starters, the cast is evenly split between New York newcomers and New Stage veterans, but the comedy is also set far north in Bucks County, Pa. At the same time, the attachment to home will ring true with southerners, as will the play's eccentric central figures, Pryblyski says.

"I think a Jackson audience in particular will really connect with how quirky these characters are," he says.