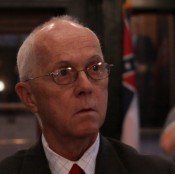 Rep. Cecil Brown will lead a public education rally tomorrow at the Capitol.

The state budget negotiations were like a summer blockbuster: expensive, full of strong language, boring and too long. Gov. Haley Barbour played a starring role, and like any diva, he got what he wanted much of the time.

For example, Barbour got the hospital tax that he wanted and that hospital advocates warn will raise patient costs and force layoffs. The tax starts at $60 million but rises to $90 million over three years.

The governor's involvement meant that the entire process took longer, according to Rep. Cecil Brown, D-Jackson, a member of the House negotiating team.

Despite exerting a powerful influence, Barbour was often maddeningly absent and out of contact, Brown said. The governor, who is enjoying national media speculation about a 2012 presidential bid, made trips to New York City, Washington, D.C., Iowa and New Hampshire during June.

Calls to Sen. Alan Nunnelee, R-Tupelo, the Senate's lead negotiator, and to the governor's office were not returned Tuesday.

"He literally climbed on top of the legislature, put both hands on the Adam's apple and strangled a budget out of them," Wiseman said.

House Democrats attempted to extend the regular session to avoid a more expensive special session where the governor could dictate the Legislature's agenda. House Republicans voted down the last-minute extension, however, placing the budget ball in the governor's court.

"We could have had a budget much sooner," Brown said. "That was purely the governor's move to take over the session."

Barbour finally called the special session on June 28 after weeks of preliminary talks, allowing Barbour to "spoon-feedԗas Brown puts itlegislators a budget, agency by agency. Barbour left Medicaid out of his initial agenda, as he waited for negotiators to reach an agreement he liked.

The governor left little doubt that he would use his veto power on an unpalatable agreement in a June 23 statement on the Medicaid issue. After House and Senate negotiators trumpeted a tentative Medicaid agreement on June 22, Barbour fired back, a statement drawing attention to what he called "a huge, fundamental flaw." The flaw was a restriction on his power to cut Medicaid funding in the future, and he vowed to "fight the proposal with all (his) might."

As Barbour insisted, the final Medicaid bill gives him the ability to cut Medicaid funding in the event of future program deficits. He made a minor concession in giving hospitals the ability to voluntarily pay a higher tax to make up a shortfall.