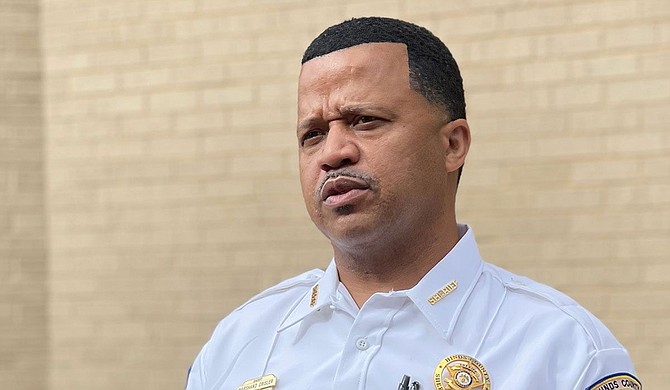 Interim Hinds County Sheriff Marshand Crisler said at a press briefing on Tuesday, Oct. 19, that his office is doing eve rything it can to make the Raymond Detention Center safe but needs the Board of Supervisors' assistance. Photo by Kayode Crown

Lack of compliance with court orders and the department of justice’s consent decree led to six deaths at the Hinds County Detention Center in Raymond this year, court-appointed monitor Elizabeth E. Simpson wrote in a Thursday, Oct. 28, court filing.

The deaths occurred on March 19, April 18, July 6, Aug. 3, Aug. 4 and Oct. 18. The Hinds County Sheriff's Office released only the information about the suicides of Justin Mosley, 21, and Johnny Woodrow Gann, 33, on April 18 and July 6, respectively—during the time when Lee Vance was still sheriff, who died in August after testing positive for COVID-19. .

Following Vance’s death, the board of supervisors appointed Marshand Crisler as interim sheriff. Crisler and 12 others are candidates in the Nov. 2 special sheriff election. The county will also hold elections tomorrow for Subdistrict 1 County Judge and District 5 Constable.

On Tuesday, Oct. 19, Interim Sheriff Crisler, disclosed in a press briefing that detainee Micheal Richardson died on Monday, Oct. 18, after two other detainees assaulted him.

Crisler added that the Mississippi Bureau of Investigation is looking into the death, and his office will investigate if any administrative lapse was responsible for what occurred. He also said that the incident happened in Pod A and that he is committed to bringing those responsible to justice.

"We take this matter very seriously, and we intend to fully cooperate with MBI and bring those responsible for Mr. Richardson's death to jail and prosecute them to the fullest extent of the law in my administration," the interim sheriff said. "We're taking effective proactive measures to bring this jail into compliance."

Federal monitor Simpson wrote in the Thursday report that poor supervision contributed to Richardson's death and that the doors don't lock in the unit where it occurred.

She noted that video evidence showed that between 4:30 a.m. and 5 a.m. on Monday, Oct. 18, one inmate hit another in the head, and a third inmate "stomped on his head several times."

"He was then dragged across the mezzanine," she added. "The video footage shows brief movement by the decedent and then none indicating that he was probably dead at that point, but a time of death has not been established."

"He was eventually dragged back and propped in a sitting position and then later laid on a mat."

The report indicated that the dead body was not found until 1:45 p.m., nine hours later.

"This was despite the fact that breakfast and lunch was served and well-being checks were supposedly being made," Simpson wrote. "Medical was called and arrived 6 minutes later."

"They did not perform CPR," she added. "In addition to the question as to how he could not have been discovered for nine hours, there is the additional question of why this activity was not observed on camera from the control room."

She wrote that "the minimal incident reports" for the death identified the incident as "Medical Report-injury" and not "assault." She added that it cast doubts on the reporting's accuracy.

At the press briefing last week, Sheriff Crisler said what is needed ultimately was a new jail. Still, as a temporary measure, he said that the Hinds County Board of Supervisors should fund further renovations to make the facilities safer.

At the Oct. 19 press briefing, Jail Administrator Katherine Bryant said that the jail had suffered neglect for many years.

"In the few short months the sheriff and I have been, we have taken extraordinary efforts to address the decades of neglect and apathy for this jail," she said.

"And I am confident moving into the future, the sheriff and I will be able to make some success with the help of the board of commissioners and the support of the citizens of this county to make some changes that are long needed."

The county-appointed monitor Simpson wrote that the first death this year on March 19 was because of medical negligence. A Jackson Police Department Officer brought an arrestee to the detention center that day and a detention officer helped him out of the car to a holding cell. A nurse examined his condition and determined that the inmate needed to be in the hospital.

"Subsequently, the arrestee collapsed, and the nurse was called back from Medical to perform CPR," Simpson wrote. "When she asked why the individual had not been transported to the hospital, she was told that staff wanted another evaluation first."

"When an attempt was made to provide oxygen from an O2 concentrator, it would not turn on because of a faulty electrical outlet," she added. "An extension cord had to be obtained to reach another outlet so that the concentrator could work."

Because an automated external defibrillator machine was not in the booking area, someone had to run to the medical section to bring it.

"After it was delivered, it was discovered that the AED unit had no pads," she said. "After the arrestee expired, the HCSO took the position that he was not an inmate because he had not been accepted/booked."

Simpson said that the second death was by hanging after Justin Mosley was put in a booking holding cell for an extended period contrary to the recommendation and with no EAD at the booking center one month after the first incident. "Obviously, no corrective action was taken (since March)," she noted in the report. Mosley had been left alone without checks for three hours that day.

The monitor said that Gann on July 6 hung in his cell. "(B)oth the Detention Officer, and the Sergeant who accompanied him, did not immediately open the cell door and lower the inmate to the floor when they found him hanging," Simpson said. "Instead, they went to C-Pod Control to report what they saw by telephone to a Lieutenant in Booking."

"Only after doing so did they return to the cell and attempt to assist the inmate."

The Aug. 3 death of an unnamed inmate was from an apparent drug overdose. Simpson noted that "there have been numerous overdoses in this calendar year which, fortunately, did not result in death; however, this one appears to be a death as a result of an overdose."

Though there is no autopsy and toxicology report available in the case, his cellmate said that he had been using spice that night. Some inmates also reported that they called for assistance for him for five hours without response.

The Aug. 4 death was reportedly from COVID 19 complications, with questions remaining about his medical response timeliness.