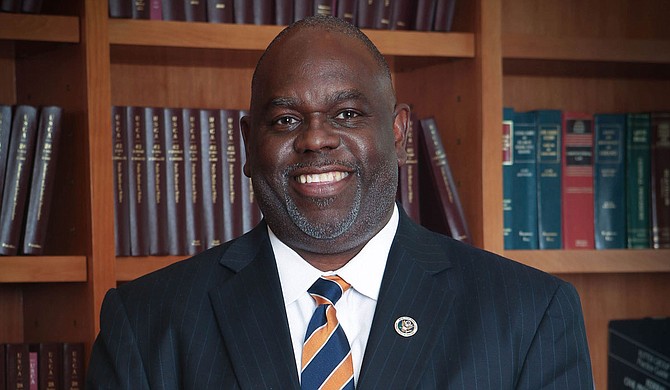 U.S. District Judge for the Southern District of Mississippi Carlton W. Reeves is holding a hearing on Tuesday, Dec. 21, 2021, to determine if he should hold Hinds County in contempt for the condition of the Raymond Detention Center after a consent decree with the U.S.l Department of Justice in 2016. Photo courtesy Carlton Reeves

On Tuesday, Dec. 14, 2021, Hinds County responded to the U.S. District Judge for the Southern District of Mississippi Carlton W. Reeves’ Nov. 23 request to convince the court not to find it in contempt for its handling of the Hinds County Detention Center in Raymond in the wake of the 2016 U.S. Department of Justice consent decree with the county.

In last month’s order, Reeves mentioned the county’s continued violations of the consent decree and a 2020 stipulated order. Two days after the county’s response, Reeves scheduled a status conference on Zoom for Dec. 21 to set a date for hearings on the matter.

Reeves had requested a response from the county within 21 days of his November order, contending that it has not made good progress on the jail’s unsafe conditions since 2016.

“[T]hey have no end in sight, in fact,” Reeves wrote. “And the County’s failure to remedy the conditions has caused ‘needless suffering and death,’ (with) six deaths so far this year.”

‘Hold in Abeyance any Decision’

In last week’s filing, the defendants—Hinds County, Hinds County Board of Supervisors and the sheriff—through attorneys Reuben V. Anderson, Nicholas F. Morisani, and William T. Siler, Jr. of Phelps Dunbar, LLP—asked the judge to give them until July 1, 2022, before rendering judgment, citing ongoing improvements at the detention facility.

“The County thus respectfully asks that the Court hold in abeyance any decision to engage in such an extraordinary use of power until July 1, 2022, to allow the County additional time to continue its ongoing efforts and to prove it can make even more significant, positive change at the RDC,” they wrote.

“The Court’s frustration over the lack of meaningful changes is clear, and even understandable, if the Court’s understanding of the situation was correct,” the county and other defendants wrote. “Through this Response and any hearings the Court orders, Hinds County intends to demonstrate that numerous, dramatic changes have, in fact, occurred and the County is making significant progress in turning the RDC battleship towards a new and better heading.”

The county explained that since the current Hinds County Board of Supervisors took over in January 2020, it has expended millions of dollars for construction, improvements and an increase in staff pay.

“A new sheriff, Tyree Jones, was just elected and sworn into office on December 3, 2021, and he immediately met with (Raymond Detention Center) RDC administrators and the Board and pledged his support to improve the RDC,” the defendants wrote.

One of the sticking points in the order that Reeves issued in November was that the new jail administrator Kathryn Bryan, who is American Jail Association certified, recently tendered her resignation to go into effect Feb. 1, 2022, after only a few months in the office.

“On November 10, the Detention Administrator submitted her letter of resignation,” Reeves wrote. “She described ‘a distinct lack of support’ and relayed in detail a recent directive from the Interim Sheriff (Marshand Crisler) that she found ‘reckless and dangerous.”

However, with the election of a new sheriff after a special runoff election on Nov. 23—the date Reeves sent the order—and subsequent meeting with the new Sheriff Tyree Jones and the Board of Supervisors, the county said that the jail administrator had reversed her decision, and “has recommitted herself to getting the job done at RDC.”

Though employed on July 19, 2021, Bryan only effectively took over the jail from August after contracting COVID-19 during her first week at work. Previous Sheriff Lee Vance died of COVID-19.

The county cited various portions of a 2020 stipulated order by Reeves that the county has met or is in the process of meeting, and mentioned that though there have been two suicide attempts during Bryan’s tenure, none has been successful. There were, however, two successful suicide attempts at the jail on April 18 and July 6, 2021, as the Mississippi Free Press previously reported.

“Medical and mental health care have improved immensely,” the county argued. “As mentioned in the Court’s order, there has been one (1) death resulting from violence on Major Bryan’s watch, which she personally investigated and for which she authored an after-action report.”

The attorneys explained that the long-term plan includes establishing a new jail facility. “The logistics of such an undertaking are enormous, but the project is moving forward,” they said.

After Reeves’ “order to show cause,” the Hinds County Board of Supervisors at its Dec. 6 meeting approved a resolution to move closer towards a new detention center. The resolution underpins a memorandum of understanding with the Central Mississippi Planning & Development District toward the construction of the new facility. CMPDD serves Hinds, Copiah, Madison, Rankin, Simpson, Warren and Yazoo counties to address “needs through various funding opportunities,” among other things, the organization says on its website.

Last month, Hinds Board of Supervisors President and District 3 Supervisor Credell Calhoun told the Mississippi Free Press that the proposed facility will be along McDowell Road in Jackson, Miss.

‘Needs That Must be Addressed’

The county, in its court filing, explained that there are many other areas of need at the Raymond Detention Center.

“Structural issues involving leaking roofs and damaged ceilings are actively being addressed by maintenance staff and outside contractors.”

Part of addressing the problems include transferring detention staff-training responsibilities from the sheriff to the jail administrator, the county said: “[T]his allowed Major Bryan, in conjunction with her training officer, to plan improvements to the training curriculum for detention staff.”

With regards to mental health, based on a renegotiated contract with Quality Correctional Healthcare, Raymond Detention Center will have a full-time mental-health nurse practitioner by January 2022.

At the yet-to-be-sheduled hearing, the county will seek to convince the court that conditions are improving at the jail.

“There is a new Board in place with a demonstrated commitment to righting the ship at the RDC, and the County has a newly elected Sheriff who has been in office less than two weeks,” the attorneys wrote.

“Moreover, since mid-2020, the County has contracted with a construction contractor (Benchmark Construction) and architecture firm (CDFL Architects and Engineers), both of which are experienced in detention structures and services,” they added. “These new players and the accomplishments the County has made to date toward satisfying the 2020 Stipulated Order’s requirements make the situation vastly different today.”