Despite Deaths Behind Bars, Hinds County Wants Out of Consent Decree 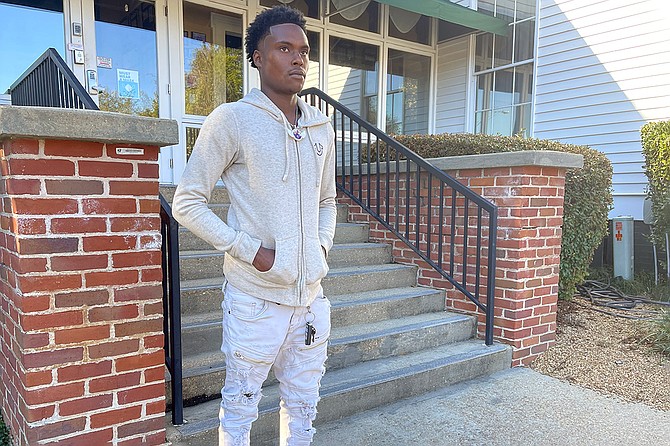 Malik Richardson, 22, said that his father, Michael, unexpectedly dying in jail on Oct. 18, 2021, left a hole in his heart. Photo by Kayode Crown

In the early hours of Oct. 18, 2021, between 4:30 a.m. and 5 a.m, a fellow inmate repeatedly hit Michael Richardson in the head as another stomped on his head several times in a section of the Hinds County Detention Center in Raymond, Miss., where the doors don’t lock. As they dragged the 41-year-old across the mezzanine, Richardson moved slightly but shortly afterward stopped moving altogether.

His attackers then pulled him back, put him in a sitting position and laid him on a mat where he remained motionless for the next eight hours before jail staff discovered his body.

Jackson police had arrested Michael Richardson on Oct. 9, 2021, according to court documents, at Jackson’s Regency Hotel for having a firearm as a convicted felon. The early felony conviction was for a September 2004 armed robbery, for which he had served 15 years. On Oct. 11, the Jackson Municipal Court placed ordered bail of $100,000 at his initial court appearance, and he was locked inside the detention center for just a week until his murder.

Malik Richardson, 22, is still reeling from the loss of his father, Michael. “If I’m going to be totally honest, a part of me died when I found that my father was no longer alive; he is the person in which I was able to find my identity,” he said. He was reading a 500-word prepared speech he had typed on his phone on Wednesday, Jan. 26, 2022, as this reporter and family attorney Charles Mullins listened to him at his firm’s downtown Jackon office.

“He understood me without me having to explain myself,” Richardson added as he continued to reminisce.


Richardson left prison precisely three years before his death after serving 15 years for the armed-robbery charges.

The Hinds County Detention Center has been under a federal consent decree since 2016.

Elizabeth E. Simpson, the federal court appointee tasked with monitoring the consent decree, reviewed the video footage of how Michael Richardson died and wrote to the court about it on Oct. 28, 2021, identifying this incident as the latest in a series of deaths at the jail that year.

Jail staff did not find Michael Richardson until hours later at 1:45 p.m., “despite the fact that breakfast and lunch (were) served and wellbeing checks were supposedly being made,” Simpson wrote.

Writing to the court 10 days after his death, Simpson blamed that incident and others recorded in the year on a lack of supervision and other problems at the jail.

“[T]he information that is available points out the ongoing problems and practices that have been raised repeatedly by the Monitoring Team are contrary to the Settlement Agreement and present life-threatening safety issues,” she wrote.

“This was on HU A-4 where the doors don’t lock, and there is minimal staff supervision,” she indicated. “As has been reported, sometimes there is only an officer in the control room with no officers assigned to the housing units.”

Hinds County Sheriff Tyree Jones informed the Mississippi Free Press over the phone on Jan. 26, 2022, that his agency had fired two jail officers earlier this year and another faces “possible disciplinary action” based on an administrative investigation into Michael Richardson’s death.

“There were several policies that had been violated,” he said. “The death is still under investigation from my understanding with the Mississippi Bureau of Investigation.”

“I haven’t gotten a report back from them or any findings about the criminal investigation that they were conducting about his death,” he added.

After six deaths in 2021, court-appointed monitor Simpson had seen enough and petitioned the court last October to take steps to prevent another.

“These deaths raise concerns that have been consistently raised in prior monitoring reports,” she wrote. “The Monitoring Team respectfully recommends that the Court set a status conference/hearing to address immediate measures that need to be taken to address the concerns raised above and prevent the future loss of life.”

On Nov. 23, 2021, one month later, U.S. Judge Carlton W. Reeves of the U.S. District Court for the Southern District sent a show-cause order. In it, he warned Hinds County that unless it could persuade him differently, he would place the jail under receivership, taking it from the county’s jurisdiction.

The County responded in December 2021, saying it has been doing all in its power to resolve the numerous issues.

Judge Reeves convened a telephone hearing on Dec. 21 to consider the scheduling of the show-cause proceeding and set a deadline of Jan. 4, 2022, for the parties to declare their agreement on how things will move.

The judge subsequently signed a scheduling order dated Jan. 10. “In its Order to Show Cause, the Court promised a hearing on whether a receivership should be created to operate RDC,” Reeves wrote.

He invited the parties to find as much agreement as possible “on the facts, the law, and the proper remedy this case warrants.” If that did not yield a positive result, he planned to proceed with an in-person evidentiary hearing for this week for two days and oral arguments for tomorrow—Friday, Jan. 28.

“Proposed findings of fact and conclusions of law, exhibit lists, and witness lists are due by close of business on January 19,” he indicated. By that deadline, he asked each side to submit names and CVs of two to three potential receivers and stated at the time that he planned to rule on the case in February.

But, A Change of Plans

Judge Reeves later postponed the late-January proceedings to February after lawyers for Hinds County filed an emergency motion for an extension on Jan. 14, 2022, because one of them, Nicholas Morisani, had contracted COVID-19. Hinds County also told the court that it planned to ask for the termination of the consent decree.

“Defendants are also in the process of drafting a motion to terminate or modify the parties’ July 2016 consent decree pursuant to the Prison Litigation Reform Act (PLRA),” the lawyers wrote.

They contended that the PLRA requires the parties and the court to consider whether the decree goes beyond what is needed to address the alleged violations and whether it is restricted and the least invasive approach. They said that the motion necessitates a 30-day stay and possibly 60 days on proceeding after filing the said motion.

The court held another hearing four days later and decided to grant the emergency motion.

“The evidentiary hearing is reset for the week of February 14, 2022,” Reeves wrote on Jan. 18, 2022. “Proposed findings of fact and conclusions of law, exhibit lists, witness lists, and proposed receivers are due by close of business on February 9.”

On Jan. 21, Hinds County filed the motion to terminate or modify the consent decree, where it argued that it has complied with the January 2020 stipulated order.

“The Prison Litigation Reform Act (PLRA) provides several avenues for terminating or modifying prospective relief, like consent decrees,” the motion explained. “In light of those statutorily-prescribed provisions, the County files the instant motion to terminate or, alternatively, modify the consent decree.”

“Accordingly, because the consent decree’s policies and provisions exceed the constitutional minimum necessary to provide the County’s inmates with basic sustenance, and the conditions of the County’s facilities do not violate the inmates’ basic constitutional rights, the consent decree must be terminated or, alternatively, modified pursuant to 18 U.S.C. § 3626(b) of the PLRA,” they argued.

Their argument said that the jail is in better condition than when they agreed to the consent decree.

“Fast-forward to October 2021, the county’s compliance with the consent decree paints a different picture,” they wrote. “The monitoring team found the County in either sustained compliance or partial compliance with nearly seventy-percent (70%) of the consent decree’s policies and provisions; a far cry from the monitoring team’s first visit and a clear reflection of the positive, upward trend of operations at the RDC.”

While Sheriff Jones told the Mississippi Free Press that he will continue to engage with federal monitors and the board of supervisors to address concerns presented by the consent decree and respond to the show-cause order, Hinds County lawyers pointed out in the motion to terminate or modify the consent decree that zero suicides have occurred in its facilities since August 2021.

“And while one (1) death (of Richardson) resulted from violence, (Jail Administrator) Major (Kathryn) Bryan personally investigated the incident and authored the after-action report,” the County wrote.

Stabbed Through His Ears

But for the family of Richardson, it was one death too many. Now attorney Charles Mullins of Coxwell and Associates, representing the family, is preparing to take Hinds County to court for his death and seek a monetary settlement.

That would not be his first rodeo litigating cases of deaths at the center.

“I first started back in 2014,” Mullins told the Mississippi Free Press in a Jan. 26 phone interview. “There was a riot at the Hinds County jail, and I represented one family of a gentleman who was killed and two other inmates who were beaten up in the riot.”

Damion and Derrick Lewis suffered injuries at the riot. At the time, Derrick had been a pre-trial detainee for nearly six years and Damion for over two years. That means they had served a combined eight years in a jail with poor security and conditions, although they had not been convicted of alleged crimes that put them there.

“Both plaintiffs nearly lost their lives as a result of their injuries, and the long-term physical damages remain undetermined at this early stage in their recovery, as well as to what level of recovery can reasonably be expected,” Mullins wrote in the brief.

Markuieze’ Che’Rod Bennett, however, died in the riot. “The mob of inmates beat him with various blind and sharp objects, including broken broom and mop handles, one of which was used to stab decedent through his ears to his brain, leading to his death,” the complaint said. “Decedent died at the Hinds County Detention Center as a result of his injuries sustained in the riot of March 31, 2014.”

In September 2018, Landon Veal, 35, sustained injuries after several inmates beat him up and left him unconscious. Mullins blamed an “out of control” jail for the incident in his brief.

A few months after that, on Dec. 6, 2018, several inmates at the jail assaulted Dominique Griffin. The county settled both cases in December 2020, Mullins said.

“And it’s essentially because the jail was being operated as an unconstitutional condition of confinement,” Charles Mullins told the Mississippi Free Press. “Essentially the jail is so understaffed, the staff they do have are not trained. There’s no supervision, and they have a policy essentially of failing to protect inmates.”

Because the jail cells in the unit where Michael Richardson was kept do not lock, “the inmates are just free to roam around unsupervised,” Mullins added. “And it’s something that when I was talking to Malik, Mike’s son, I said, ‘You know, it’s just a wonder that we don’t have more assaults and more deaths at the jail.”

Malik Richardson told the Mississippi Free Press that he is still processing his father’s death.

“My father was not perfect by any means, and neither was his past, but he did not deserve what happened to him,” he said.