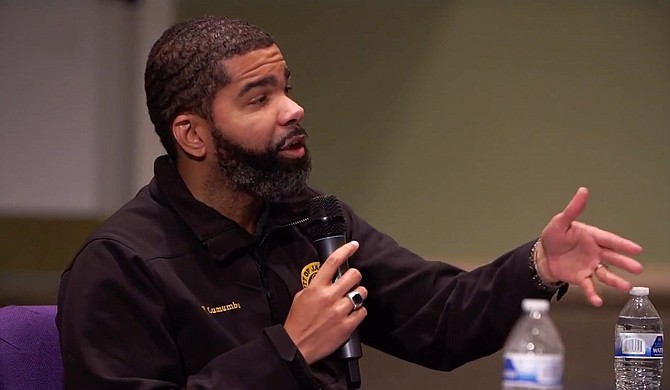 Mayor Chokwe A. Lumumba said at the special Jackson City Council meeting on Tuesday, May 4, at New Horizon Church on Ellis Avenue that poverty is linked to crime. Photo courtesy City of Jackson

A guaranteed income, a youth center, a focus on mental health and better engagement with federal help are some of the ideas that emerged from the special Jackson City Council meeting held 6 p.m. at New Horizon Church on Ellis Avenue on Tuesday, May 4, to address crime in the city of Jackson. Those who gathered and spoke included federal, state, county and city officials, as well clergy.

Mayor Chokwe A. Lumumba drew the attention of the attendees to the link between poverty and crime. "One data point that we fail to recognize is wherever you have high poverty, you have high crime,” he said. "And the communities that you recognize for having low poverty, you know what they have in common? They have a higher average household income and don't deal with as many of the social traumas that we deal with in communities that are facing poverty on the level that we are."

"I am a member of an organization called Mayors for Guaranteed Income, and I'm going to be supporting how we start providing a guaranteed income for people who are without resources for people and mothers who are the CEOs of their households, but unable to deal with their children because they're out trying to find out how they support their families and leaving young people at the wayside who are unable to navigate life with the limited judgment of youth," the mayor added.

On its website, the group founded in June 2020 stated that guaranteed income “is a monthly, cash payment given directly to individuals. It is unconditional, with no strings attached and no work requirements."

Bishop F.L. Blount of Greater Tree of Life M.B. Church on West Capitol Street explained at the event that Healing the City Coalition, an organization he founded in 2003, has decided to engage those at higher risk of committing crime and asked the city’s support to convert the closed-down Hardy Middle School to an outreach facility.

"We have a list of programs (planned for the facility): anger management, parenting classes, substance abuse, and the list goes on," he said.

Blount noted that people coming out of prison often have no place to go. Plus, pre-trial detainees who have to wait in jail months or years for a trial or case resolution often leave angry, he said, and staying in jail because of lack of prosecution progress breeds anger. "They are sitting there from six months to two years before their court date," he said. "That caused a lot of anger. That's why they have the breakout that's going on."

U.S. Congressman Bennie Thompson, who chairs the Homeland Security Committee in the House of Representatives and has been representing Mississippi District 2 since 1993, said such a youth development program and other city needs can benefit from federal funding sources, accessible via grants.gov.

Mississippi Department of Public Safety Deputy Commissioner of Operations Keith Davis said he will address the issue of the sale of illicit drugs that Ward 3 Councilman Kenneth Stokes brought up and also pointed at the need to emphasize mental health as a component of public safety. "Our people are stricken with this thing called mental health, and we're not talking about it enough. It's not diagnosed," he said. "And I would like to see the Department of Homeland Security address mental health as it relates to the communities like the city of Jackson."

"And I personally believe that that is one of the main drivers of the crime issue that you have in the city of Jackson."

Davis said that as Moss Point police chief from 2011-2015, he dealt with similar levels of violent crimes like Jackson is dealing with. "And one of the things that we were successful at is going into the clergy and talking to the clergy, and we standing side-by-side in the streets, telling these young people ‘you're going to die, if you don't do better, you're going to die.’ And the second thing that we did is we tackled mental health," Davis stated. He, however, did not provide any data on the impact of that move.

He said merely focusing on making arrests will not solve the problem and that community engagement needs to be at the forefront. "The City of Jackson Police Department does not have the manpower, and the sheriff doesn't have the space to keep them in,” he said. "But if we get out there, and we talk to them and encourage them to not do things that they're doing, then we'll make some headway with what this problem is in the city of Jackson."

Hinds County District Attorney Jody Owens described the murder rate in the capital city as a crisis and said his office needs more support and resources to resolve cases quickly, adding that his office has to deal with 3,000 cases with a staff of 12 attorneys. He said that out of the 139 murders last year in the county, 129 were in Jackson, which already has suffered 48 homicides in 2021.

Owens explained his office’s challenge at getting funding from the state to prosecute crimes, noting the amount of effort it took for the Legislature to approve one year of funding to employ two more assistant district attorneys included in the appropriation package.

"So this whole system, as we've talked about all day, needs more resources,” Owens said. “In 2014, the State of Mississippi gave every district attorney's office more resources except Hinds County. We can wonder why. We've always been the stepchild getting less than we deserve. We have the most crime in Mississippi, and we need the most resources.”

County Attorney Gerald Mumford emphasized the importance of working with the youth and that a minor possessing a gun could indicate neglect. “[W]e have to make sure we take care of the youth," he said. "It's illegal in this state for any child, any person under 18 to have a gun. That may be an indicator of neglect, somebody’s not watching that child."

Read the JFP’s award-winning archive of solutions journalism on violence prevention at jfp.ms/preventingviolence. Email story tips to city/county reporter Kayode Crown at [email protected]. Follow him on Twitter at @kayodecrown.