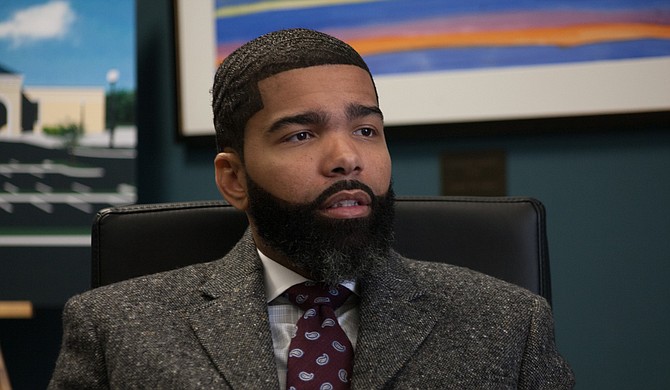 Mayor Chokwe A. Lumumba at the Jackson People's Assembly meeting pushed the need for community involvement in the City of Jackson’s decision-making process. File Photo by Stephen Wilson

More than 80 Jackson residents joined the Zoom on Saturday as the task force talked about progress including actively referring all cases of officers involved in civilian deaths to the district attorney for investigation and grand jury review; releasing identities of officers involved in shootings; banning the release of mugshots of those police officers kill and banning 'perp walks' for juveniles.

A ‘Civilian Review Board’ Ahead?

"We have expanded the task force to address police brutality, use of force policy, as well as working to implement a civilian review board," said C.J. Lawrence, a member of the task force and Lumumba’s law partner before he became mayor. "(We are conducting) the research necessary to ensure that the review board is one that has legitimate power behind it, that is firm and is not entangled with the police, something that is independent from it in making its determinations."

He said the goal is to ensure that the civilian review board, which will look at cases of alleged police brutality, has appropriate legal power backing and is not entangled with the police in making its determination.

Lawrence said the task force recognizes the need to go even further than those efforts. "We are working diligently to really address policing and the consequences of excessive force and abuse of power here in Mississippi," Lawrence said.

Mayor Chokwe A. Lumumba, who was on the Zoom conference, praised the participants for their commitment and contribution.

"This has been a necessary process for many years now. It started with my father when he sought to be a part of the city council and had continued since then," he told the participants in the virtual forum. "This is an independent body for democratizing power for the community; that is why we need your participation."

He encouraged participation in the budgetary process and informed about the constraints the City has because federal dollars are attached to specified ends.

Lumumba has drawn harsh criticism for doing too little to reduce police violence, or increase transparency around it.

Early in his term, the Jackson Free Press reported and editorialized on use of juvenile mugshots and perp walks, as well as the City’s practice of never releasing the names of most police officers who shoot or kill civilians. That reporting led to several executive orders, as well as almost a year of an officer-involved shooting task force to decide whether and when to name officers who shoot people. The task force included members of the JPD and eventually revealed names of unidentified multiple officers who shot people during Lumumba’s first year and a half in office.

Effective civilian review boards, on the other hand, are designed to not include police officers. Currently, law enforcement investigates officers accused of violence or brutality, cases that are often not transparent and that bring little or no consequences.

A Call To Defund the Police

The Black Youth Project 100 took an abolitionist stance with regards to the police in a presentation during the assembly, calling for "trauma-informed response teams" and "mental health and family counseling” to replace policing, and "wellness centers” to replace incarceration.

"And it's not just that police are ineffective in many communities, they are actively harmful. The history of policing is a history of violence against the marginalized," BYP100 noted. "And it's bigger than just police brutality: it's about how the prison industrial complex, the drug war, immigration law, the web of policy, law and culture that forms our criminal justice system have destroyed millions of lives and torn apart families."

"Cops don't prevent crimes; they cause it, through the ongoing violent disruptions of our communities," they added.