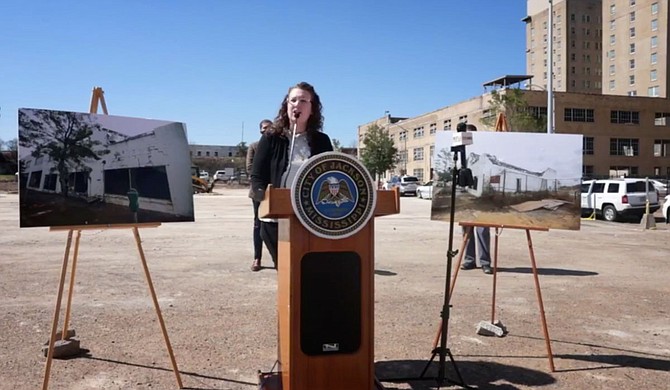 City of Jackson Department of Planning and Development Director Jordan Hillman explained the different work the department is doing to combat blight in the capital city at a media briefing on March 8. Photo courtesy City of Jackson

Five structures constituting commercial blight in Jackson are up for demolition starting in April after pending bids and council approval, Department of Planning and Development Director Jordan Hillman said at a March 8 press conference.

"As soon as we open those bids, we will hopefully review them, and if they come back in the range that we expect, we will turn that around and get it on (the city) council (agenda) as soon as possible," Hillman said. "So as we move through the next few months, we hopefully will see these big demolitions proceed."

The City held the press conference at 215 W. Pearl St., where the Jackson Police Department’s Precinct 2 building used to stand, but has been demolished after the city council approved $130,000 on Jan. 19 for R & C Services LLC to demolish it.

At the press conference, Mayor Chokwe A. Lumumba said the demolition effort is to signal the city's readiness for investors and to "eliminate eyesores."

"Over the course of the last few months, we have launched an initiative to deal with several eyesores across the city," the mayor said. "These eyesores are not only less than aesthetically pleasing to our city, to our residents, to visitors, but they are a barrier to future investment."

"We are now standing in what used to be the old JPD police precinct that was falling in on itself," he added. "As I have talked to investors, as I have talked to residents, there has been a constant cry in order to eliminate this eyesore."

Lumumba said that it has been difficult to tackle both the commercial and residential blights in the city because of budget constraints. "In fact the demolition of one or two of these buildings can usually consume our entire budget for what it takes to demolish (residential) properties," the mayor said.

Hillman explained her department’s various efforts and the limitations they face and what is needed to interrupt the blight cycle.

"The blight issue is not stagnant, meaning that as we remove it, other properties that previously (did) not need demolition may, moving forward, requiring demolition," she said. "Our work cannot solely focus on the removal; it has to also focus on the interruption of the blight cycle."

"We have worked tirelessly in shifting our approach in code enforcement, cleanup and blight; there are still some challenges that we must overcome that require policy support from other entities," she added. "Particularly assistance in addressing anonymous property ownership, which means a property is owned by a non-existent a non-existent LLC or an LLC with no address or an LLC with only a P.O. Box and an unregistered agent; assistance with looking at the role of the tax sale redemption process plays and (the role that) anonymous property ownership (plays) in fueling the blight cycle."

Hillman said it is vital for the city to have a land bank; however, the legislation to allow land banks sponsored this legislative session by Rep. Earle S. Banks, D-Jackson, died in committee.

The Department of Housing and Urban Development defines a land bank as an entity set up to manage and dispose of vacant lands towards urban revitalization.

“(It is) established, at least in part, to assemble, temporarily manage, and dispose of vacant land for the purpose of stabilizing neighborhoods and encouraging re-use or redevelopment of urban property,” it said. “(A) land bank will operate in a specific, defined geographic area. It will purchase properties that have been foreclosed upon and maintain, assemble, facilitate redevelopment of, market, and dispose of the land-banked properties.”

"(We need) assistance with land bank legislation to allow for creative reuse of property held by the Mississippi secretary of state as tax-forfeited land," Hillman said, "There are currently over 2000 properties in Jackson in that database."

Hillman hinted at a new code-enforcement initiative to keep property owners accountable for keeping their properties clean. "And I hope that as the results become visible to the work we've been doing, that our community can see that we are fighting back, and we are establishing a new approach to demanding that our property owners keep their properties at a basic maintenance level, but also not punishing those that are in poverty," she said.

"That is not the goal of what we are up to. Our goal is to re-establish what basic property maintenance looks like in the city and to hold those accountable that should be maintaining properties that are not."