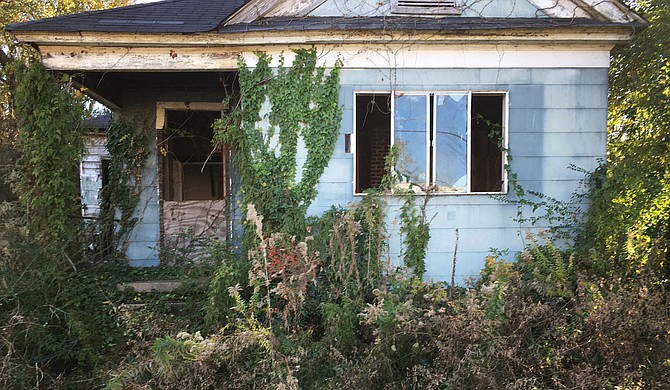 Decaying property dots many Jackson neighborhoods. Many have absentee owners including the State of Mississippi. Photo by Kayode Crown

Tyrone Washington, a construction worker who lives on Rondo Street in Jackson's Georgetown community, has nothing good to say about the political and administrative leadership of the capital city. He complains about lax rule in the city not keeping building lots in his area in good condition. He also says the City of Jackson does not remediate the poor drainage system that contributes to flooding.

"Since we had these crummy laws and stuff that don't force the people to keep their stuff clean," Washington said in an interview with Jackson Free Press, "this is what you have."

His area has dozens of decrepit and uninhabited houses and plots filled with bushes and trees leaning on buildings, and some houses gutted by fire. Many buildings clearly show signs of long-term abandonment.

Washington insists that the area's condition "makes no sense." He is discouraged from inviting people over to his house because of the level of degeneration.

The government's lack of attention to the area that he has witnessed year after year, he says, continues to make things worse. Washington said the empty lots indicate where houses used to stand but were later removed. Not regularly kept in a good state, the lots are now overgrown with bushes and trees.

"Once they remove those houses, then it leaves these sections right here," he said, pointing to an empty lot. "A lot of these sections that you see that are clean, they belong to the City, too. ... The people next to them don't want that stuff right beside their houses, so they clean (them) up to (an extent)."

The area used to be a delight, Washington said, adding that his grandmother owned where he stays now. "We've been over here since the early seventies, late seventies," he said. "This used to be beautiful."

Regular flooding has driven many people from the area as the water fills the street and flows up the houses' steps, Washington added.

Washington said he would not buy the empty lot beside his house but takes the responsibility of cleaning it up because it reflects on him. "That has everybody thinking that I own it, but I don't," he said.

"We won't buy it or do anything with it 'cause when it rains, the creek gets so high, it looks like an ocean."

Abandoned Due to Flooding

As Washington took this reporter on a tour of the vicinity, he pointed to a house, emptied from flooding from Town Creek. The threat of flooding terrorizes the people in the area. Some manage the situation by lining the edges of the buildings on the outside with nylon sheeting. 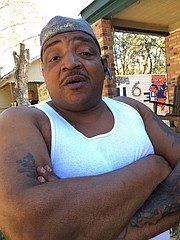 Tyrone Washington, a homeowner on Rondo Street, is livid that the city government is not, in his opinion, living up to expectations. Photo by Kayode Crown

"Look at them houses over there; nobody's staying there. They can't keep nobody in it," he said. "They rent it (but) soon (that) spring rain comes."

"When the last time they'd been down here, removing these trees and debris (from the creek)?" he asked rhetorically. He added that his experience has been "awful," and he plans on moving out, too.

Ward 3 Councilman Kenneth Stokes traced the blight problems in the area to the "war on drugs," as the local government demolished suspected trap houses.

"Over the years, the city came, and they tore the houses (down) on the war on drugs because (people) were using a lot of this area here for drug activities," he said.

In 2015, then-Jackson Police Chief Lee Vance led efforts to tear down 100 dilapidated properties and burned houses that breed crime, which crime and violence research supports. "Unfortunately, drug-addicted people use them," he said. "During the winter time we see people that are homeless that go in the abandoned homes to seek shelter and eventually they start fires."

"We've got more work to do, but it's a start, and we believe it is a way to combat crime," Vance said.

In 2016, Jackson Free Press reported that the number of building demolitions carried out under the police's auspice had reached the 200th mark that year, with 85% of the buildings owned by the State of Mississippi.

A search on Dec. 15, 2020, for "State of Mississippi" on the Hinds County Land Roll website returned 2,000 entries. In 2016, this newspaper reported that those properties fell into the state government's hands because of tax forfeitures. The city demolished scores of them to prevent crime and drugs from festering from those places.

From Bandos to Overgrown Lots

Abolishing crumbling "bandos," however, is not the full answer. "Then you have abandoned property (that becomes) overgrown lots," Stokes said. "See a house right there, just overgrown, the city pulled down some buildings, and people left because of the drugs. ... Once they leave the area, it becomes overgrown."

That prolongs a downward spiral for a neighborhood, meaning it's hard to even sell the land cheap. "They tried to put the property on the land roll to give people a chance to buy it. But as you see, most of (that effort) doesn't work because people don't buy it," Stokes added.

Stokes held a press conference earlier in the month to call on the city's mayoral leadership to address the problem of the burned-up and abandoned houses in his ward, which he said are eyesores and destroying neighborhoods.

"The citizens were promised to have these burned houses torn down," he said in a statement. "A red number was placed on the front of them, and they were on the list to be torn down." He said the City needs to follow through with the promise.

Isaiah Littleton, a 65-year-old United Postal Service retiree, now lives in Madison, where he built a house. But he grew up on Woodlawn Street in Jackson. The reporter spoke to him on the street when he was there to monitor the house that belonged to his late mother, Christine. He remembers that some decades ago, Woodlawn Street was a bubbling community, but it has become a shadow of its old self. 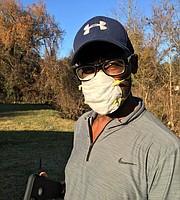 Isaiah Littleton grew up on Woodlawn Street in Jackson. He decries the degradation of the community. Photo by Kayode Crown

"So it just eventually went down," he added. "This was a middle-class neighborhood. There were working families. My father was a pastor, and there was a principal here. You had a lot of schoolteachers in the neighborhood."

The area also suffers from flooding. Littleton showed this reporter a house with a mud line about a foot from the ground, which indicates the level of past flooding of Town Creek.

Since March, the creek has been listed monthly as part of emergency orders the Jackson City Council approved to draw attention to the flooding issues. Still, the people may not have respite anytime soon.

In an interview in November, Public Works Director Charles Williams said lack of funding had hampered the effort to address flooding in the city.

"We have not really addressed (or) really put funding in place for some of those drainage systems," he said. "And there's also another difficult task of trying to identify monies in order to address that while you have other infrastructure systems that are competing for funding in order for us to address those issues as well."

Washington laments the futility of trying to add features to his house, saying the regular flooding makes it prohibitive. "You'd like to put a nice patio, a fireplace pit or something to be nice out here—you can't," he said. "Everything has to be elevated out here."

The homeowner pointed out where he keeps his property outside the house to prevent flood water from getting to them. "All my stuffs (I) kept on a trailer off the ground," Washington said, pointing to his backyard. "That water 'll get up there and be all up by them steps; that water'll be all up back there."

Washington takes it upon himself to cut down the trees that line the creek as he is tired of waiting for the City to do something. He accused the City of not cleaning out the empty plots regularly.

"Then if they do, they wait to the end of the year," he said. "But through the whole process, its (bushes) been doing nothing but sitting there growing."

He complained of lack of enforcement of the rules relating to plot maintenance plots. "They don't make people clean up their plots. No, they don't put pressure on you like (in) Ridgeland," he said.

This reporter requested an interview on Dec. 11 with the city's Director of Planning and Development Jordan Hillman, but she has not been available to talk about related plans.