Blighted Property a 'Recipe for Disaster,' But Residents Can Buy Some of It | Jackson Free Press | Jackson, MS

Blighted Property a 'Recipe for Disaster,' But Residents Can Buy Some of It 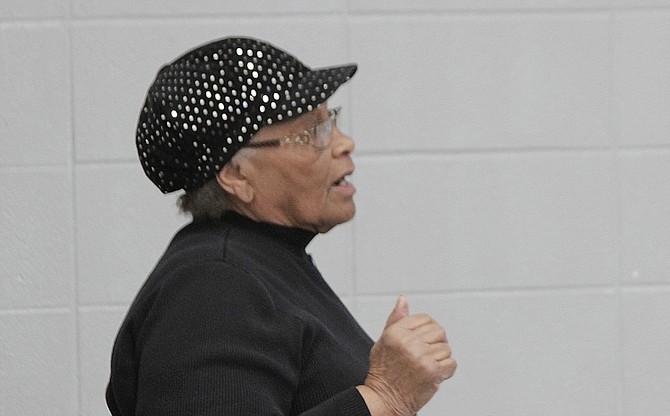 Alberta Epps inquired at the meeting about property next to her home, discovering the owner had back property taxes. Photo by Tim Summers Jr..

When Alberta Epps arrived at the Jackson Police Training Academy Saturday morning, she was looking to find out more than about some overgrown property next to her house. She was interested in whether the Neighbors First Lot program enabled her to purchase the land.

She quickly learned that the property was not eligible for the Neighbors First program, which allows homeowners adjacent to 150 abandoned lots, so far, to purchase them if the City owns them. But more than anything she just wanted the grass cut on the overgrown lot and was willing to purchase the property to get it done. "I'm a widow," she said, standing up during the meeting, "and it is growing up."

With a handful of documents detailing which lots she was interested in, Epps had come to the meeting to learn more. She had already offered to buy the land, she said, and the owner had said he was interested. But she still had reservations about the purchase.

"There's no secrets to using the Hinds County land roll," Jackson City Planning Department representative Von Anderson explained during the April 16 Neighbors First Lot training seminar. Residents can look up their street or specific lots and see who owns the property and whether they owe back taxes.

"Alright, now I'm about to find out where I stand," Epps said.

Von Anderson of the City of Jackson Real Estate Department explains to residents how to use the Hinds County Land Roll to look up property in their neighborhoods.

Anderson pulled up the Hinds County land roll and entered in the parcel number of the lot that Epps wanted to buy from her neighbor. When he referenced the lot with the property tax history, the crowd counted through the years of back taxes together: "One! Two! Three!"

Anderson asked them what would happen next, and a ripple of laughter went across the room. They had all learned earlier in the meeting that after three years of back property taxes, the lot would go to auction in the fall. Epps asked if she should still purchase the property from the owner.

"I would not advise you to give him any money," Anderson said.

The Neighbors First Lot program will not only reassign 150 abandoned or vacant city-owned lots to the tax base, generating revenue for the city, but also have the side effect of educating the citizens of Jackson about who owns the overgrown, dilapidated lots that dot the poorer sections of town. The program is currently accepting applications. The preference for applications begins first with homeowners adjacent to the property, then to other neighbors on the same block and Neighborhood Associations and Community Land Trusts.

If none of those parties is interested, the lots will be opened up to residents in the City. The land must be zoned R-1 or R-2 residential, and applicants must submit a plan for developing the property and complete said plan within 2 years.

Anderson, during the meeting, pointed out that while the city does have a very small number of lots for the program, the State controls around 3,000 lots across Jackson. Most of those properties come into State purview as a result of tax forfeitures and are auctioned off during the fall, Anderson said.

But for most in the audience, what started as a seminar about the Neighbors First Lot program ended up an empowering lesson on purchasing the blighted property around their homes, literally a doorway into reinvesting in their own streets and neighborhoods.

"It's an opportunity for people that want to invest in their community," Susan Brinston said.

A lifelong resident of south Jackson, Brinston said that she attended the first Neighbors First meeting and left intrigued about the chance to buy up ruined, neglected property around her. "When I went back to do my research, I saw that a lot of it was owned by the state, even in my neighborhood. And if it is not state-owned a lot of it is investment companies out of state."

Brinston said she wants to buy and clean the land in order to discourage the use of abandoned homes by what she described as the "criminal element."

"What I want to do is clean the area off," Brinston said describing how children will use the lots as a gathering spot, "so that they will have a play area."

She described the conditions as a "recipe for disaster," with burnt, barely standing skeletons of homes harboring dangerous criminals, detailing her fear of something happening to the children of her neighborhood.

The next Neighbors First Lot program will be April 23 from 9 a.m. to 11 a.m. at the Jackson Police Training Academy. The City is currently accepting applications for the program. The forms can be found online at JacksonMS.Gov, by clicking on Neighbors First link on the left side of the page.