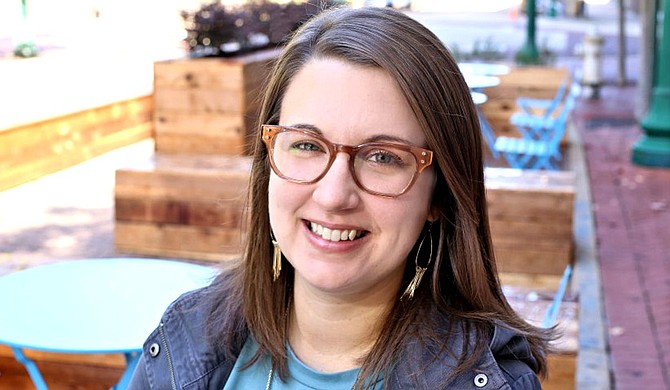 Director of Planning and Development Jordan Hillman, at her confirmation hearing at the special council meeting on Thursday, Sept. 10, said staffing issues had been an Achilles' heel of her department. Photo courtesy Jordan Hillman

Two Jackson City Council members voted against Director of Planning and Development Jordan Hillman's official confirmation to a new term on Thursday, Sept. 10. She scaled through in a 4-2 vote. The council had unanimously confirmed Hillman to the position in the last term in September 2019.

Ward 5 Councilman Vernon Hartley and Ward 6 Councilman Aaron Banks, who voted against Hillman's confirmation on Thursday, complained about a lack of improvement in some of their wards' priorities. "The people in the community (see) stuff happening in other areas of town, and they just (feel that they are) being forgotten, and things are just not happening," Banks told Hillman at the meeting.

"There is a blighted service station that's halfway burned and halfway torn down on Rainey Road; it's been like that for about five years," he added. "One of the owners of the convenience store put up the money himself out of pocket to pay someone to do it, and the guy said that he would do the rest pro bono."

Banks said the City shut down the process because the contractor was unlicensed. The councilman said that, instead, the planning department should assist those who want to do the right thing.

"So if people are willing to do stuff for free, instead of just shooting them down and just leave them out there, (you should find) a way to help them get out there and do what they want to do to serve the community," Banks added.

Banks mentioned that Greater Southern Jackson Improvement Association and Women for Progress also wanted to participate in community improvements, but the planning department rebuffed them.

"The city council unanimously voted a resolution in support of volunteer work (for) community improvement," Banks added. "But at the end of the day, they felt disappointed because they wanted to get intimately involved in helping, even in helping to raise money, to help with some of those efforts."

The director, in response, said she is setting up a neighborhood planning unit in the department to incorporate different organizations that want to be involved in community improvement like those that Banks mentioned.

"We were in the midst of a complete process change, so at that time, I could not accommodate them in a way that would have actually been impactful," Hillman explained. "We need a staff person that can put them through a curriculum, train them on what is actually helpful versus what an officer has to do, and create a system for it to be actually effective—that was what we were missing."

Banks added that the lack of demolition of the Casa Grande Apartment complex is also a sore issue in his community. "This is another school year where the scholars from Sykes Elementary got to walk pass it; the people in that community got to walk past it to go to the swimming pool that's just been redeveloped," he said.

Hillman said that ownership contention is holding up Casa Grande’s demolition, and she expects the judge handling the case to rule on it in October.

"Because of the practical issues with the (property's) title that I know nobody really wants to hear about or understand, that judge had to hold it, and he's continued to hold it," Hillman explained. "We will either get permission to demolish it, or the new owner will step forward, and then we know who to go get with a demolition order to compel them to do it or to renovate it back.

"And that's still a question of whether or not that's even possible. But we cannot intervene during a title situation."

Councilman Hartley said that "absentee landowners" who don't take care of their properties do not face the consequences. "They get off easy, and then the neighborhood has to suffer," the councilman said. "That's one of the things I constantly see out there is these folks get away with just helping to destroy the neighborhood."

Hillman said that the City has not been doing code enforcement because of staffing issues.

"(The City is not) running enough code enforcement officers to dream of hitting every property ever," she said. "Even if they wrote cases all day, every day and prosecuted every single person that they could, it would take us years to tackle the backlog."

"So most of our challenges right now are in staffing capacity and retaining staff, and less in what the ordinance actually says; it's actually the effective use of it," she added. "We did little to no property maintenance code enforcement at the City for years, so it's like starting riding a bicycle again."

"My impediment is not so much with absentees where we can find the absentee. It is with the tax sale process itself and what it creates," she said. "The intent of that process is to collect the money and not actually to move the property to the next hands."

"So working with the State legislatively to come up with ways to transition those properties into the hands of people who actually want them, versus those who are playing the tax sale (game) for the interest is one of our biggest challenges," she added.

The State of Mississippi owns many abandoned properties in Jackson.